A mission as complex as the European Space Agency’s highly successful Rosetta is a compilation of interlocking parts. I always find it fascinating to look at the instrumentation aboard. Take Alice, a UV imaging spectrograph no bigger than a shoebox. Alice weighs in at less than 4 kilograms and draws a meager 4 watts of power, but it offered us a thousand times the data we could retrieve with similar instruments no more than a generation ago.

Alice produced over 70,000 spectra in two years, according to its principal investigator, Alan Stern (a familiar name indeed for those interested in the outer Solar System!) With these data we’re learning about the porous surface of the comet, its lack of exposed water ice, and the unexpected occurrence of molecular hydrogen around it.

Rosetta’s Ion and Electron Spectrometer (IES), likewise the work of the Southwest Research Institute, is another triumph of miniaturization, achieving the sensitivity of instruments weighing five times as much (IES has a mass of about a kilogram). In combination with four other instruments analyzing the plasma environment, the IES examined solar wind interactions with the coma of Comet 67P/Churyumov-Gerasimenko.

For the final images of the Rosetta mission, we leaned on the spacecraft’s OSIRIS wide-angle camera, which captured the scene just before Rosetta made its controlled impact onto the surface on September 30. As expected, the signal from the spacecraft was lost upon impact, but we still coaxed information on cometary gas, dust and plasma out of Rosetta as it descended. All told, 11 science instruments contributed to Rosetta’s abundant reservoir of data.

As with the upcoming end of Cassini’s mission, there is a certain poignancy in Rosetta’s final chapter, though as the comet heads toward the orbit of Jupiter, there would have been too little sunlight to power the mission. Ending its life on the comet it studied seems fitting. 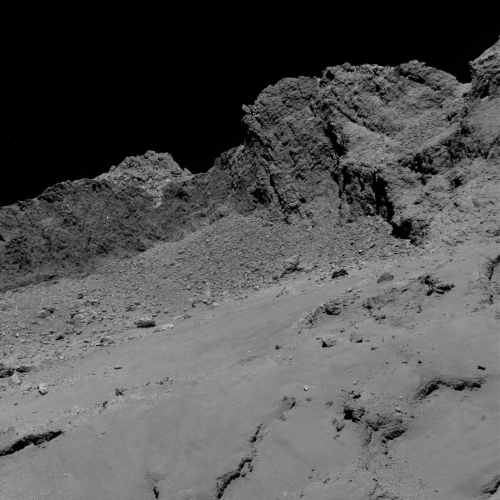 Image: The OSIRIS narrow-angle camera aboard the Space Agency’s Rosetta spacecraft captured this image of comet 67P/Churyumov-Gerasimenko on September 30, 2016, from an altitude of about 16 kilometers above the surface during the spacecraft’s controlled descent. The image scale is about 30 centimeters per pixel and the image itself measures about 614 meters across. Credit: ESA/Rosetta/MPS for OSIRIS Team MPS/UPD/LAM/IAA/SSO/INTA/UPM/DASP/IDA.

And here we have the final image, which reminds me in several ways of the final Huygens image from Titan. In both instances, we have a controlled descent to a surface of huge scientific interest culminating a first-of-its-kind mission, in Rosetta’s case the first spacecraft to orbit and escort a comet on its journey. I’m also reminded of some of the early images from the Moon, such as the photo Ranger 7 took at about 500 meters above Mare Cognitum in 1964. 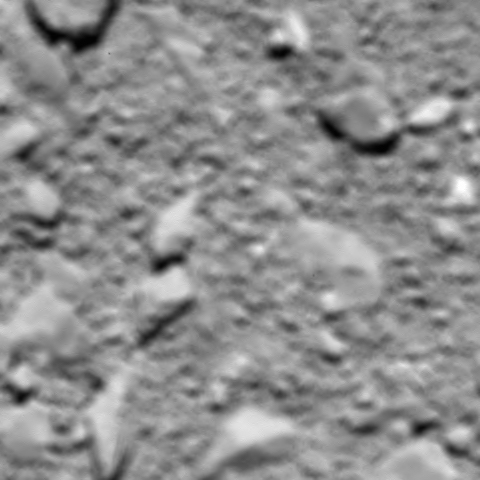 Image: Rosetta’s last image of Comet 67P/Churyumov-Gerasimenko, taken shortly before impact, at an estimated altitude of 66 feet (20 meters) above the surface. The image was taken with the OSIRIS wide-angle camera on 30 September. The image scale is about 5 mm/pixel and the image measures about 2.4 m across. Credits: ESA/Rosetta/MPS for OSIRIS Team MPS/UPD/LAM/IAA/SSO/INTA/UPM/DASP/IDA.

Now, as with New Horizons, we have years worth of data to comb through, with early discoveries an indication of the richness of the datasets. The Rosetta Orbiter Spectrometer for Ion and Neutral Analysis (ROSINA) has demonstrated that comets contain the amino acid glycine, while discovering over 60 molecules at Comet 67P, 34 of which had never been found on a comet, according to André Bieler (University of Bern). Only some 5 percent of the ROSINA data has been analyzed to this point, which means we should have no shortage of future cometary analysis. We’ll also learn more from the Microwave Instrument for Rosetta Orbiter (MIRO) data, examining the behavior of gas and dust as they form the coma.

On the surface of Comet 67P is a 130-meter pit that mission controllers named Deir el-Medina. The reference is fascinating in itself. In the period of the Egyptian 18th to 20th dynasties (roughly 1550-1080 BC), Deir el-Medina (then known as Set Maat, or ‘Place of Truth’) was the village where artisans labored while they worked on the tombs in the Valley of the Kings. Painters and artisans decorated tombs dedicated to helping the spirit find its way in the afterlife.

Image: The region called Ma’at, on the smaller of the two lobes of Comet 67P/Churyumov-Gerasimenko. Rosetta targeted a region that is home to several active pits measuring over 100 m wide and over 50 m deep, with the hope of getting some close-up glimpses of these features. The large, well-defined pit adjacent to the target site and identified in the image above as Ma’at 02 has now been named by the mission team ‘Deir el-Medina,’ after a pit in an ancient Egyptian town of the same name that was home to many of the workers who built the pharaoh tombs in the Valley of the Kings. Credit: ESA/Rosetta/MPS for OSIRIS Team MPS/UPD/LAM/IAA/SSO/INTA/UPM/DASP/IDA.

Cometary terrain adjacent to the Deir el-Medina region on Comet 67P is now Rosetta’s final resting place. The connection with an ancient village and key archaeological site is somehow fitting, as we connect our deepest impulses of exploration with our earliest attempts to probe the riddle of existence. The thought that human technology now rides a comet deep into the Solar System is a spur, goading us to reach out again, as we have so often done, into the unknown.