Cosmology: Shelter from the Storm

I had thought while the power was out this past week that I would like to write about cosmology when it came back. That’s because there’s nothing like a prolonged power outage to adjust your perspective. The big picture beckons. In my case, it was thinking about how trivial being out of power was compared to those who had lost so much more in the wake of the recent hurricane.

So thinking about the cosmos became my shelter from the storm. I appreciated the emails from so many of you, but aside from a major chunk of tree that landed on the roof, we did just fine. In fact, it was deeply moving to see people from the neighborhood — some I knew, some I only recognized — turn up to get up on the roof and move that tree. I’m always reminded to do more for the people around me when I see something like this, and apprehensive that my resolution to do so all too often gets put aside as normal life returns.

The Universe We Can See

Reading by candlelight really is wonderful, and I ask myself why I don’t do it more often. There is something about that soft, flickering light on a well-printed page. And I found reading about cosmology by candlelight was especially pleasing, a way of connecting to a past way of life that had its own conceptions about the cosmos. One thing I read was my notes from work just received when the power went, a paper on galactic structure I fortunately printed just in time.

The conclusion of this one is straightforward: There are at least 10 times as many galaxies in the observable universe as previously thought. Christopher Conselice (University of Nottingham, UK) led an international team that produced this result. I was reading about it in a room full of candles and thinking about room after room of candles stretching out into infinity.

That homely thought weds the prosaic and the vast, sort of the way Douglas Adams did in his famous line on the size of the universe in The Hitchhiker’s Guide to the Galaxy:

“Space is big. You just won’t believe how vastly, hugely, mind-bogglingly big it is. I mean, you may think it’s a long way down the road to the chemist’s, but that’s just peanuts to space.”

I’m sure you’re familiar with the line, but it still raises a chuckle. And this team’s findings cause yet another shift in perspective. Thus Conselice:

“It boggles the mind that over 90% of the galaxies in the Universe have yet to be studied. Who knows what interesting properties we will find when we observe these galaxies with the next generation of telescopes.” 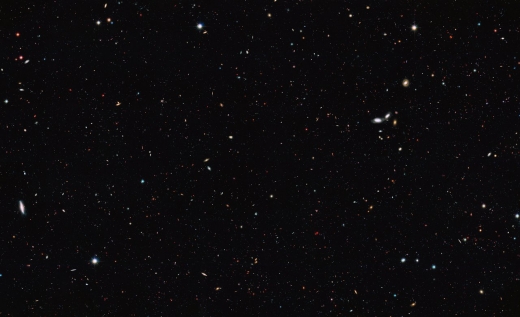 Image: The GOODS South Field (Great Observatories Origins Deep Survey). GOODS draws on observations from the Spitzer, Hubble and Chandra observatories as well as the European Space Agency’s Herschel and XMM-Newton, along with ground-based facilities, to survey the distant universe across the electromagnetic spectrum. Credit: GOODS/Conselice et al.

Before this, we relied on such measures as the Hubble Deep Field images from the 1990s, which helped us arrive at an estimate of between 100 and 200 billion galaxies in the observable universe. Conselice and team studied the matter using Hubble imagery as well as other published data to create a 3D view, estimating the number of galaxies at various times in the history of the cosmos. Their mathematical models pointed to the result, that we have not been able to see most of the galaxies that are out there in our cosmological horizon.

Moreover, the work offers an interesting perspective on galaxies throughout time, one showing how their numbers have changed as the universe evolved. The paper explains that the total number density of galaxies in the universe declines with time:

[The] total number density… declines by a factor of 10 within the first 2 Gyr of the universe’s history, and a further reduction at later times. This decline may further level off between redshifts of z = 1 and z = 2. The star formation rate during this time is also very high for all galaxies, which should in principle bring galaxies which were below our stellar mass limit into our sample at later times. This would naturally increase the number of galaxies over time, but we see the opposite. This is likely due to merging and/or accretion of galaxies when they fall into clusters which are later destroyed through tidal effects, as no other method can reduce the number of galaxies above a given mass threshold.

So what is known as the ‘top-down formation of structure’ in the universe is supported by this work. Most of the galaxies in the first few billion years of the universe were similar in mass to the satellite galaxies we see surrounding the Milky Way. Galactic mergers reduce the total number. And although Conselice and colleagues show us that there are so many galaxies that almost every point in the sky contains part of one, most of these galaxies are invisible not just to the human eye but to our best telescopes.

If that rings a bell, it’s because we’re homing in on Olbers’ paradox, the idea that the darkness of the night sky is in contradiction to the assumption of an infinite universe filled with stars (based on the work of the German astronomer Heinrich Wilhelm Matthias Olbers, 1758-1840). Why is the night sky as dark as it is? I won’t get into the details on dust and gas absorption of light that the paper offers, but will simply quote the finding from the Conselice paper:

It would… appear that the solution to the strict interpretation of Olbers’ paradox, as an optical light detection problem, is a combination of nearly all possible solutions – redshifting effects, the finite age and size of the universe, and through absorption.

The paper is Conselice et al., “The Evolution of Galaxy Number Density at z < 8 and its Implications,” to be published in the Astrophysical Journal. Preprint here.