A Renewed Look at Boyajian’s Star

It was inevitable that KIC 8462852 would spawn a nickname, given the public attention given to this mystifying star, whose unusual lightcurves continue to challenge us. ‘Tabby’s Star’ is the moniker I’ve seen most frequently, but we now seem to be settling in on ‘Boyajian’s Star.’ It was Tabetha Boyajian (Louisiana State) whose work with the Planet Hunters citizen science project brought the story to light, and in keeping with astronomical naming conventions (Kapteyn’s Star, Barnard’s Star, etc.), I think the use of the surname is appropriate. 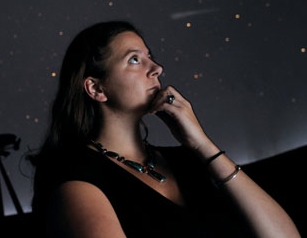 Planet Hunters works with Kepler data, looking for any dimming of the 150,000 monitored stars that may have gone undetected by the automated routines that hunt for repeating patterns. Boyajian’s Star cried out for analysis, dimming in odd ways that flagged not the kind of planetary transit across the face of a stellar disk that researchers expected but something else, something that would make the star dim by as much as 22 percent, and at irregular intervals. That led to a variety of hypotheses, the best known of which is a large group of comets, but we also have evidence that the star has been dimming at a steady rate.

With the story this unsettled, this morning’s energizing news is that Boyajian’s Star is now being examined by Breakthrough Listen. Working with Jason Wright, now a visiting astronomer at UC Berkeley, as well as Boyajian herself, the SETI project intends to devote hours of listening time on the Green Bank radio telescope in West Virginia to the star. You’ll recall that Breakthrough Listen is the $100 million SETI effort funded by the Breakthrough Prize Foundation and its founder, investor Yuri Milner. The Breakthrough Starshot project described often in these pages is also a Breakthrough Prize Foundation initiative.

As Andrew Siemion (director of the Berkeley SETI Research Center and co-director of Breakthrough Listen) explains in the video above, the project has access to the most powerful SETI equipment available, meaning its scientists can study Boyajian’s Star at the highest levels of sensitivity across a wide range of possible signal types. But the Green Bank effort will hardly be the first, for Boyajian’s Star has already excited a great deal of interest, as Siemion explains:

In Green Bank, Breakthrough Listen has access to the largest fully steerable radio telescope on the planet. Observations are scheduled for eight hours per night for three nights in the next two months, the first having taken place on October 26. The plan is to gather as much as 1 petabyte of data over hundreds of millions of individual radio channels. Siemion describes a new SETI instrument that can examine “…many gigahertz of bandwidth simultaneously and many, many billions of different radio channels all at the same time so we can explore the radio spectrum very, very quickly.”

Breakthrough Listen will be observing using four different radio receivers on the Green Bank instrument in a frequency range from 1 to 12 GHz, a range beginning, Siemion says, at about where cell phones operate up through the frequencies used for satellite TV signals. 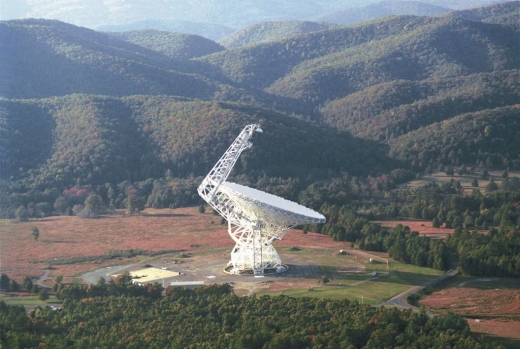 Image: The Green Bank Radio Telescope (GBT) focuses 2.3 acres of radio light. It is 148 meters tall, nearly as tall as the nearby mountains and much taller than pine trees in the national forest. The telescope is in a valley of the Allegheny mountains to shield the observations from radio interference. Credit: NRAO/AUI.

Yesterday’s live video chat from Green Bank with Tabetha Boyajian, Jason Wright and Andrew Siemion is now available online, with the trio answering questions about the ongoing study. Boyajian was asked as the session opened how many comets it would take to reproduce the effects being observed around KIC 8462852. The answer: Hundreds to thousands of “very giant comets” just to reproduce the last 30 days of the data.

The numbers give no particular credence to the idea that we may be looking at some kind of artificial construction project around Boyajian’s Star, but they do underline how mysterious are the processes, assuming they are natural, that are driving this phenomenon. Boyajian called the comet hypothesis ‘pretty outrageous,’ but went on to say that of all the explanations, it is the one she most favors, as all other explanations are likewise outrageous.

On that score, I want to mention Jason Wright’s paper, written with Steinn Sigurðsson at Penn State, looking at other possible solutions to the Boyajian’s Star puzzle. It’s particularly useful early on in a section devoted to the follow-up work that has occurred, including the SETI studies with the VERITAS gamma-ray observatory, the Allen Telescope Array and the Boquete Optical SETI Observatory, but also reprising the interesting controversy over the dimming of the star. If you need to catch up with Boyajian’s Star, this is the place.

Wright and Sigurðsson conclude that long-term dimming would not fit well with the comet hypothesis, leaving us still searching for an answer. What does work its way up the chain of plausibility? An unusually dense region of the interstellar medium or a chance alignment with a localized molecular cloud occurring between us and the star is in the mix. The latter might be a so-called ‘Bok globule,’ an isolated and dark nebula dense with dust and gas.

The comet hypothesis is still in play, but a number of other explanations are problematic:

Less compelling, but difficult to rule out, are intrinsic variations due to spots, a “return to normal” from a temporary brightening (due to, perhaps, a stellar merger) and a cloud of material in the outer solar system. We find instrumental effects, other intrinsic variation in Boyajian’s Star, and obscuration by a disk around an orbital companion to Boyajian’s Star very unlikely to be responsible.

Read the paper for the entire list, which includes, with plausibility listed as unclear, the idea of artificial structures (“Would find support if all natural hypotheses are ruled out, we detect signals, or if star suffers significant achromatic extinction.”) The paper is Wright and Sigurðsson, “Families of Plausible Solutions to the Puzzle of Boyajian’s Star,” accepted at the Astrophysical Journal (preprint). But see also Jason Wright’s 10-part popular summary on Boyajian’s Star, which goes through all the options.