If you’re on the Moon and learn that there has been a major solar eruption, your best course of action is to get inside an appropriate shelter somewhere below ground, where you can be shielded from its effects. By analogy, wouldn’t a future civilization on Earth be able to shield itself from the effects of a supernova or gamma ray burst by burrowing into the planet?

In their paper on stellar explosions and risk mitigation, Milan Ćirković and Branislav Vukotić argue against the idea, which runs into problems on multiple levels. For one thing, while the duration of gamma ray emissions is generally short — on the order of a hundred seconds or less — the pulse of accelerated cosmic rays from a supernova or GRB blast is likely to last much longer, perhaps a matter of months or even years.

Digging to avoid the worst of the effects would take you deep into the ground indeed. The authors cite work showing that you would need to burrow up to 3 kilometers below the surface before the incoming flux would drop to 1% of its initial value. And finally, Earth’s atmosphere could not itself be shielded this way, opening the door to ecological catastrophe.

A system-wide infrastructure involving asteroid mining and perhaps planetary colonies is likewise at risk. For all these reasons, Ćirković and Vukotić think a future or extraterrestrial civilization would choose space-based shielding in its own planetary system as a response to the threat of any nearby stellar explosion. Here the most natural building material is ice, found in great abundance in the outer Solar System. What emerges is the concept of a ‘shielding swarm’ far from the Sun whose bulk density can be adjusted as necessary.

Here the notion of ‘smart dust’ inevitably occurs, which gives us a way of describing the swarm:

…we envision a swarm of particles confined by electromagnetic forces interspersed by smart dust particles controlling the swarm and enabling more precise manipulation, in addition to controlling ionization necessary for the ice particles to be moved around. They could provide essential telemetric information and the data on conditions within the swarm necessary for self-regulation actions. Since various forms of carbon, including fullerenes, is currently thought to be the best material for building smart dust, as well as other nanotechnological applications [89], and the Kuiper Belt objects are carbon-rich, it seems natural to assume that fragmentation of the very same icy body or bodies creating the bulk of the shielding swarm might provide material for construction of smart dust particles as well. 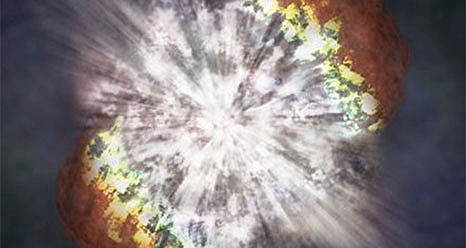 So let’s drop back to the core idea. Assuming a threatening source can be identified and its likely explosion predicted, an advanced civilization could choose the appropriate icy objects and change their orbit to reach the staging area, where construction of the swarm can begin. Such a swarm could itself reduce cosmic ray flux by several factors, while additional active shielding could be provided by the same system of electromagnetic confinement that would be used to manipulate the particles in the swarm during its formation.

When contemplating what an extraterrestrial civilization might do (or indeed, what we might ourselves do when we reach a sufficient technological level), it’s useful to consider the thought processes involved. Freeman Dyson is relevant here — we are saying that anything we can hypothesize about our own future course should apply to at least some extraterrestrial species. This is how, without understanding the intricacies of a future technology, we can make broad predictions about possible astroengineering and how we might detect it.

Searching for Dyson swarms or spheres is an example of this, the search being motivated by our belief that such a swarm would be an intelligent way of maximizing energy resources for a society around a particular star. The fact that we can imagine it — although we are a long way from being able to do it — means that more advanced cultures have probably run across the same idea, given that it contradicts no physical laws. Thus it is at least worth the attempt to figure out what a Dyson swarm would look like if we stumbled across one in our data.

In a similar way, Ćirković and Vukotić believe, it would be rational for any society to attempt to reduce large-scale risk, in this case in the event of the explosion of a close supernova. Shielding swarms of the kind the duo discuss in their paper are an extrapolation of what we, as a Kardashev 0.7 culture, might do if we had the energy and resources. Nudging forward into Kardashev 1 and beyond, we might look for signs of the presence of such swarms as a potential SETI signature around other stars. The paper suggests these possible observables: 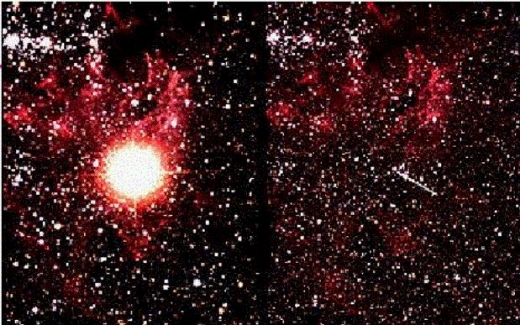 Image: The above two photographs are of the same part of the sky. The photo on the left was taken in 1987 during the supernova explosion of SN 1987A, while the right hand photo was taken beforehand. Supernovae are one of the most energetic explosions in nature, equivalent to the power in a 1028 megaton bomb (i.e., a few octillion nuclear warheads). Credit: NASA.

A shielding swarm of ice particles with infused ‘smart dust’ is attractive on a number of levels, not the least being that we can think of no physical laws such a swarm would violate, in sharp contrast to issues like faster than light travel or even the problems attendant on building a solid Dyson sphere (as opposed to a shell). The materials involved in a shielding swarm are those that would be available to any growing technology, and the construction and maintenance of such a swarm would be inexpensive to an advanced spacefaring culture.

…we conclude that successful mitigation of cosmic explosions risk is viable for sufficiently advanced technological societies, both future terrestrial and extraterrestrial. We suggest that building and maintaining shielding swarms of small particles/components is (relatively!) cheap and efficient way of achieving that goal and creating a durable planetary and interplanetary civilization. The technology required partially overlaps with that required for mitigation of asteroid/cometary impact risk, which could provide some clues for future technological desiderata and even convergence. Finally, this new type of macro- or astroengineering could not only enrich the spectrum of astroengineering possibilities, but also provide another opportunity for bold and innovative SETI programs to detect advanced technological civilizations elsewhere in the Galaxy.

Thus we have a possible new astroengineering signature to look for, and on that score, I think back to something Freeman Dyson said in a 1966 essay called “The Search for Extraterrestrial Technology.” Here he explains his view that if there are millions of places in the universe where light might develop, then we should not be thinking about average technological societies but those that are the most conspicuous. It is these we have the best chance to detect, and they will be the ones doing the biggest possible artificial activities.

Can we really rely on our extrapolations from our own technology to study this question? Here’s how Dyson stated the answer:

I assume that all engineering projects are carried out with technology which the human species of the year 1965 A.D. can understand. This assumption is totally unrealistic. I make it because I cannot sensibly discuss any technology which the human species does not yet understand. Obviously a technology which has existed for a million years will be likely to operate in ways which are quite different from our present ideas. However, I think this rule of allowing only technology which we already understand does not really weaken my argument. I am presenting an evidence proof for certain technological possibilities. I describe crude and clumsy methods which would be adequate for doing various things. If there are other more elegant methods for doing the same things, my conclusions will still be generally valid.

The paper is Ćirković and Vukotić, “Long-term prospects: Mitigation of supernova and gamma-ray burst threat to intelligent beings,” accepted at Acta Astronautica. No preprint yet available but I’ll insert it when it appears. The Dyson paper I quote above is F.J. Dyson, “The search for extraterrestrial technology,” in: R.E. Marshak (Ed.) Perspectives in Modern Physics, Interscience Publishers, New York, 1966, pp. 641–655.