In the last two days we’ve looked at a discussion of a possible SETI observable, a ‘shielding swarm’ that an advanced civilization might deploy in the event of a nearby supernova. As with Richard Carrigan’s pioneering searches for Dyson swarms in the infrared, this kind of SETI makes fundamentally different assumptions than the SETI we’ve grown familiar with, where the hope is to snag a beacon-like signal at radio or optical wavelengths. So-called ‘Dysonian SETI’ assumes no intent to communicate. It is about observing a civilization’s artifacts.

Both radio/optical SETI and this Dysonian effort are worth pursuing, because we have no idea what the terms of any discovery of an extraterrestrial culture will be. The hope of receiving a deliberate signal carries the enthralling possibility that somewhere there is an Encyclopedia Galactica that we may one day gain access to, or at the least that there is a civilization that wants to talk to us. A Dysonian detection would tell us that civilizations can survive their youth to become builders on a colossal scale, pushing up toward Kardashev levels II and III.

Keeping both SETI tracks engaged is good science. It’s encouraging on the radio front to see that the Parkes radio telescope in Australia has now joined the Green Bank Telescope (West Virginia) and the Automated Planet Finder (Lick Observatory) in SETI observations funded by Breakthrough Listen. A key component of the Breakthrough Initiatives effort (which includes Breakthrough Starshot), Breakthrough Listen has just announced the activation of its SETI project at Parkes with observations of the newly discovered planet around Proxima Centauri.

About this study, several points. First, Parkes marks a welcome expansion of the northern hemisphere efforts. Situated about 20 kilometers north of the town of Parkes in New South Wales, the telescope can observe those parts of the sky that are not visible to its northern counterparts, making it a major component in any comprehensive SETI effort. 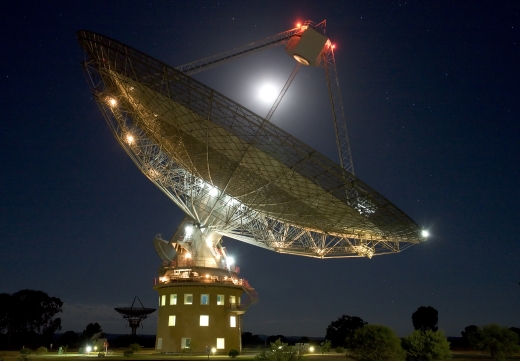 As to Proxima Centauri, we now have an Earth-sized planet orbiting in what appears to be its habitable zone, meaning that temperatures could allow liquid water to exist on its surface. The discovery of Proxima b has enlivened the interstellar community as we examine ways to learn more about it, including the Breakthrough Starshot flyby probe studies. But I think we can agree that the chances of finding a civilization on any particular planet are low.

So says Andrew Siemion, director of the Berkeley SETI Research Center and leader of the Breakthrough Listen science program. And he adds:

“…once we knew there was a planet right next door, we had to ask the question, and it was a fitting first observation for Parkes. To find a civilisation just 4.2 light years away would change everything.”

It was in the same spirit that a number of SETI instruments have been turned to Boyajian’s Star (KIC 8462852), whose unusual light curves have drawn a great deal of attention because we have so far been unable to explain them. In both cases, we have a high-interest target, in the Proxima system because of its sheer proximity to Earth and in the Boyajian’s Star system because one explanation for those light curves is intelligent engineering.

So I am all for examining Proxima Centauri even though I think the real action there will be in one day analyzing its atmosphere for signs of biosignatures. 14 days of commissioning and test observations at Parkes led up to the first observation of Proxima on November 8 (local time). The broader strategy is to continue the SETI effort at radio wavelengths across a wide range of targets, as listed in this Breakthrough Initiatives news release.

Bear in mind as these efforts proceed that Breakthrough Listen will also be coordinating searches with the FAST (Five hundred meter Aperture Spherical Telescope) in southwest China, exchanging observing plans, search methods and data. Thus we move toward a global SETI effort that can quickly share promising signals for analysis. Data from Parkes and the other Breakthrough Listen telescopes will be made available to the public online.