Into the ‘Brown Dwarf Desert’

A newly discovered brown dwarf dubbed OGLE-2015-BLG-1319 is significant on several fronts, not the least of which is how it was found. Not only are we dealing here with another instance of gravitational microlensing, where the light of a background star is affected by a foreground object in ways that give us information about the closer star, but this instance of microlensing saw two space telescopes working together to make sense of the event, the first time a microlensing event has been observed by two space telescopes and from the ground.

The space-based instruments in question are the Spitzer and Swift telescopes, whose combined observations give us different magnification patterns rising from the same event. Spitzer observed the binary system containing the brown dwarf in July of 2015 from its perch about 1 AU away from the Earth. Swift, in low Earth orbit, also saw the system in late June of that year, marking its first microlensing observation. The first notification of the event came from the Optical Gravitational Lens Experiment (OGLE) in Chile, and it was also observed by the Microlensing Observations in Astrophysics (MOA) collaboration in New Zealand. 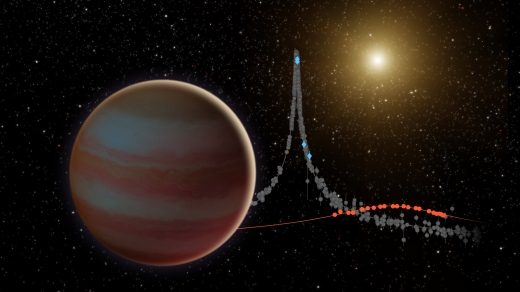 Image: This illustration depicts a newly discovered brown dwarf, an object that weighs in somewhere between our solar system’s most massive planet (Jupiter) and the least-massive-known star. This brown dwarf was discovered when it and its star passed between Earth and a much more distant star in our galaxy. This created a microlensing event, where the gravity of the system amplified the light of the background star over the course of several weeks. Credit: NASA/JPL-Caltech.

We don’t know for sure because there are two solutions to the distance question, the second being 40-52 AU. The paper notes that the Swift satellite is not distant enough from the Earth to allow for a separate measurement of the microlensing parallax, which would have made it possible to refine the distance measurement further. We get two solutions for the projected separation of brown dwarf and star, a well-known problem called close-wide degeneracy in which the perturbation patterns of close and wide objects can appear similar.

But if the 0.25 AU distance is correct, it would add to mounting evidence that the so-called ‘desert’ may be a mirage. For it turns out that OGLE-2015-BLG-1319 is hardly the first brown dwarf found through microlensing. In fact, there have been 15 published microlensing events involving brown dwarfs before this one, including one that hosted a planet, ten brown dwarfs around main sequence stars (with nine around M-dwarfs and one around a G-K class star), two binary brown dwarfs and two isolated brown dwarfs. In about half of these we also have questions about the distance between brown dwarf and star, but note this from the paper:

…the accumulation of detections suggests that BDs around main-sequence stars are not rare at separations of 0.5–20 AU, where microlensing is sensitive (this range is larger than for exoplanets due to higher detection sensitivity). This is in contrast to estimates through other techniques, such as radial velocity and transit, who find that BDs are rare (< 1%, Grether & Lineweaver 2006) at closer separations.

What to make of this? The paper continues:

One possible explanation for this difference, as suggested by Shvartzvald et al. (2016), is the different host stars that are mostly probed by each technique — FGK stars by radial velocity and transits versus M stars by microlensing.

Or as lead author Yossi Shvartzvald (JPL) puts it in this JPL news release:

“We want to understand how brown dwarfs form around stars, and why there is a gap in where they are found relative to their host stars. It’s possible that the ‘desert’ is not as dry as we think.”