The problem in sending intentional signals to the stars isn’t technology. It’s our lack of consensus. Having widespread buy-in on whether, why and how to add an ‘active’ component to SETI is deeply polarizing, at least on the surface. But dig deeper: While there are those who think we should send signals about ourselves to other stars, the opposition doesn’t necessarily disagree provided appropriate discussion and consultation be achieved first.

I’m with the latter camp and always have been. To me, this is as sensible as coming up with an environmental impact statement and debating it. We need to be thinking about the issues involved here because as technologies get more powerful, individual actors will be able to send messages that would formerly have been in the province of governments.

As I mentioned last week, such issues are not new to science, as witness the debate over recombinant DNA research that eventually led to multidisciplinary agreement — for more on this, see Asilomar Conference on Recombinant DNA — (and see David Brin’s SETI, METI and the Paradox of Extraterrestrial Life for more). The point is, thorny questions involving research and the limits on action need to be resolved through wide-ranging discussion. 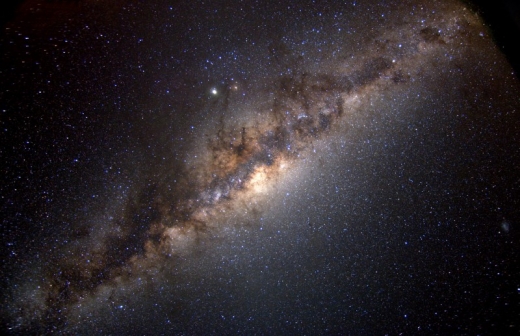 Image: Looking toward the center of the galaxy (itself obscured by dust) from the Chilean Andes. Credit and copyright: Serge Brunier.

These reflections were triggered by re-reading Michael Chorost’s essay How a Couple of Guys Built the Most Ambitious Alien Outreach Project Ever. The topic is the Cosmic Call messaging project that sent two signals, in 1999 and 2003, from the Evpatoria dish in the Ukraine. What’s interesting here is that Cosmic Call didn’t come out of a space agency or a government decision. It came out of a series of interactions between private players.

Chorost is a canny writer, the author of the deeply insightful World Wide Mind (Free Press, 2011) and an active commentator on technology. He followed the Cosmic Call story to its origins in Team Encounter, a Texas-based firm intent on launching a true interstellar solar sail — i.e., a sail dedicated to making a 100,000 year crossing to Alpha Centauri while bearing messages, photographs and even DNA samples from supporters. The sail morphed into a message which would involve drawings, texts and songs from the people of Earth.

This is where Yvan Dutil, a Canadian astrophysicist, came into the picture, contacting Team Encounter with his own ideas about how to put together a message. Dutil teamed up with the late physicist Stéphane Dumas, who began to ponder message ideas based on the work of Hans Freudenthal, who had studied symbolic media of communication. Remember, we have nothing in common with the species we are hoping to contact — we assume a basic sense of logic which Dutil and Dumas explored in the form of a message primer.

I won’t get into the details of the primer itself, sending you to the Chorost essay, but it’s worth noting that Douglas Vakoch (formerly of the SETI Institute, and now a METI advocate and president of METI International) saw in the Dutil/Dumas primer “…a complexity and depth that’s unparalleled in interstellar messages.” Of which there haven’t been many, but you see the point. This two man team had come up with a symbolic system that would allow, so they believed, an alien civilization to receive information, ask questions and respond.

In one way or another (and memories differ on exactly what happened), Dutil and Dumas became aware of the Evpatoria dish in the Ukraine, which led them to Alexander Zaitsev, an astronomer at the Russian Academy of Science whose work with the Evpatoria dish had largely involved planets and near-Earth asteroids. Already passionate about SETI, Zaitsev agreed to a proposal to oversee sending the Cosmic Call messages from the Ukraine.

Chorost likes to call this a ‘crowdsourced’ effort growing out of the dedication of the two scientists who had conceived the message and energized by their dealings with the Cosmic Call group. The effort would grow into a message sent to four stars in 1999 and then five more in 2003, using a transmitter powerful enough to be detectable as far as 70 light years out. But METI was controversial from the beginning, as Chorost relates:

…the National Space Agency of Ukraine, as it was called at the time, was alarmed enough to stop the transmission in 1999 after the message had been sent to the first star on the target list. According to Zaitsev, the agency was rattled by the attention the message was getting from the press. “Such energetic reaction of Western mass media also was an alarming news for Kiev’s officers,” he says. In addition, they had been told that the transmissions were “very dangerous for terrestrials and that USA’s deep space stations refused to make Cosmic Call transmission.” They pulled the plug. Zaitsev rushed to Kiev to reassure the brass, and the transmissions resumed on June 30, 1999.

The point that emerges is that this SETI project, conceived and funded by private organizations, wound up costing something on the order of $100,000, much of it from small donations. Although perhaps 20 people were involved in getting the message sent, the message itself was the work of two people. We can only assume that the costs involved are going to continue dropping, which means that other messages like this one surely lie ahead.

That gets me back to the original issue. The scientific process is all about a common forum of ideas, discussions of peer-reviewed papers, conference proceedings and meetings between experts in the field, with public debate affecting subsequent policy on matters of global import. With METI we are beginning to see significant decisions being taken by individuals without consensus among researchers and without the time for serious public reflection.

Can we find any agreement between the two camps on METI? Douglas Vakoch, a strong defender of METI, asks in a recent letter in Nature Physics whether there are ways of submitting transmission proposals to the scientific process. Let me quote him on this:

Scientists already have a process for judging the merit of METI projects: peer review. Decisions about allocating time for METI at publicly funded observatories should rely on the same procedure used for competing experiments. If proponents can make a convincing case, when compared with other proposals, for effectively using a transmitter for a specific METI experiment, then time should be granted.

There may well be a place for METI in our future, but we need to define and choose it. My own belief is that this needs to go beyond a small peer-review group for a specific project and extend to the entire idea of METI. How this could be done in the era of a global Internet is something that should spur the imaginations of everyone from social scientists to network programmers. However we formalize and codify the discussion, though, technological change forces the issue, making the question of who speaks for Earth more timely than ever.