The star L2 Puppis (HD 56096), a red giant in the direction of the southern constellation Puppis (the Poop Deck), is the subject of interesting new investigations using data from the ALMA array in Chile. The star appears to belong on the asymptotic giant branch of the Hertzsprung-Russell diagram, a category dominated by highly evolved cool stars. The new study sees L2 Puppis as an analog for what our own Sun will become in billions of years. Thus Ward Homan (KU Leuven Institute of Astronomy, Belgium):

“We discovered that L2 Puppis is about 10 billion years old. Five billion years ago, the star was an almost perfect twin of our Sun as it is today, with the same mass. One third of this mass was lost during the evolution of the star. The same will happen with our Sun in the very distant future.” 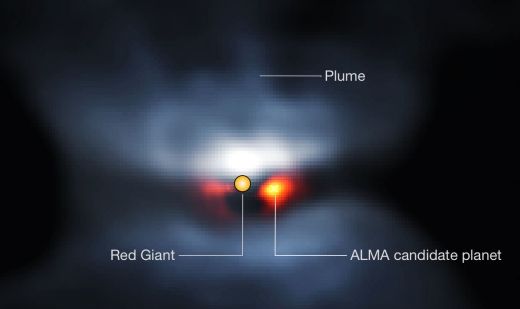 But L2 Puppis is more than just an interesting glimpse at what our Sun could become. It also offers a view of the fate of our own planet in the form of what may be an exoplanet discovered orbiting the star about 300 million kilometers out. Because as the Sun eventually moves into the red giant phase and grows more than a hundred times larger than it is today, Mercury and Venus will be destroyed, but the Earth may just hang on as a rocky core eventually orbiting a white dwarf. How the red giant phase affects planets in a system is what the L2 Puppis study is all about. Will a future Earth survive, and will it, as seems likely, be lifeless?

Asymptotic giant branch stars are undergoing a transition from red giants into the white dwarf remnants they will leave behind, meaning there is extreme loss of mass through a strong stellar wind. The resulting white dwarf at L2 Puppis should be about the size of the Earth, though compressed to the point where a single teaspoon weighs 5 tons. Stars like this also go through extreme changes in brightness and temperature, but studying the effects of these changes on their planetary systems is tricky because the planets are becoming embedded in a late-phase circumstellar envelope that can obscure observation.

At a distance of just over 200 light years, the circumstellar dust disk surrounding L2 Puppis is seen almost edge-on. The new work has allowed astronomers to arrive at a mass estimate for the star that, when adjusted through evolutionary models, shows it to have had a mass very similar to the Sun when it was on the main sequence. At 10 billion years old, the star also shows signs of a companion that, based upon its estimated mass is either a planet or a low-mass brown dwarf now accreting material from the star’s stellar wind.

It’s too early to call this a planet because the researchers have no firm lower limit on its mass, but this is an interesting object with an orbital period of about 5 years. From the paper:

From its observed properties, L2 Pup and its companion emerge as a plausible analog of the solar system at an age of approximately 10 Gyr. It provides a view on the complex interactions occurring between a solar-type star entering the planetary nebula phase and its planetary system. The companion could also play an important role in the shaping of the bipolar envelope of L2 Pup and subsequently of the planetary nebula…

So we’re learning more about the complex interactions involved when a star at this phase of its life undergoes the changes that will eventually lead to its becoming a white dwarf. Future observations both at ALMA and with the European Extremely Large Telescope (now under construction in Chile’s Atacama Desert) should offer a further window into these processes.