The supernova considered to be the brightest ever recorded may have been evidence of something even more exotic. The explosion was caught by the All Sky Automated Survey for SuperNovae (ASAS-SN), the event itself dubbed ASASSN-15h. Yesterday we looked at what happens to a star roughly as massive as the Sun as it goes through a red giant phase and becomes a white dwarf, but stars significantly more massive than the Sun take no such route. A star a minimum of 8 times the mass of the Sun can explode as a Type II supernova.

But is that what ASASSN-15h really was? Detected in 2015 in a galaxy about 4 billion light years from Earth, the event has now been the subject of new work by an international team led by Giorgos Leloudas (Weizmann Institute of Science, Israel) and the Dark Cosmology Centre (Denmark). From this we get a new explanation: ASASSN-15h may have been the result of a rapidly spinning supermassive black hole tearing a relatively low mass star apart. The passing star, in other words, lacked the mass to become a supernova, but the tidal disruption caused by the black hole led to its extreme outburst. 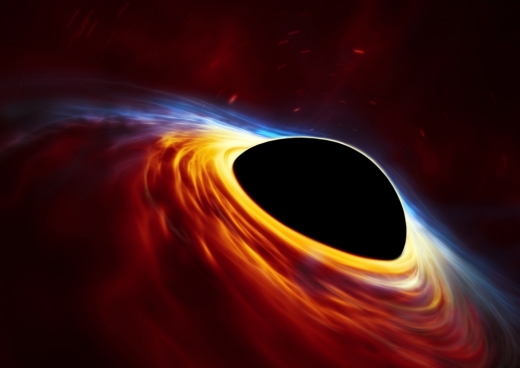 Image: An artist’s depiction of a rapidly spinning supermassive black hole surrounded the rotating leftovers of a star that was ripped apart by the tidal forces of the black hole.
Photo Credit: ESO, ESA/Hubble, M. Kornmesser.

A spectacular tidal event in the center of a galaxy sounds like something out of a Greg Benford novel, but in addition to the intrinsic fascination of ASASSN-15h comes a way to use it to delve into the physics of a black hole. For the mass of the host galaxy implies a black hole of at least 100 million solar masses, one that would be too large to disrupt stars outside its event horizon. As explained in the paper on this work, stars can only be disrupted outside the horizon of a supermassive black hole if the black hole is below a certain size — larger supermassive black holes, in other words, do disrupt stars, but by swallowing them whole.

We learn, though, that a spinning black hole — a so-called Kerr black hole, after Roy Kerr, the New Zealand mathematician who worked out the mathematics of such objects — would allow the disruption to occur, producing what had been thought to be a supernova. We wind up with a new tool for the exploration of extreme phenomena, as the paper explains:

… the typical tidally-disrupted star comes from the lower end of the stellar mass function, and this hypothesis [of a supernova] is further challenged by the old age of the galaxy’s stellar population. Observations of active galactic nuclei suggest that rapid SMBH [supermassive black hole] spins are common. We demonstrated here that TDEs [tidal disruption events] present a method to probe the SMBH spins of quiescent galaxies. Given the inferred rapid spin of the SMBH, the fact that we did not detect a jet at radio wavelengths implies that black hole spin alone is not sufficient to launch powerful jets.

The researchers agree that their evidence does not allow absolute certainty that ASASSN-15lh was a tidal disruption event. But there are sound reasons for thinking it so, including the location of the event in a red, massive galaxy of the kind not known to host superluminous supernova explosions, which usually occur in younger, star-forming dwarf galaxies. Moreover, their 10 months of observations from telescopes including the Hubble instrument, ESO’s Very Large Telescope and the the Las Cumbres Observatory Global Telescope showed three phases consistent with a tidal disruption event, including a re-brightening in ultraviolet light, that reduce the chances that this was a supernova.

“Even with all the collected data we cannot say with 100% certainty that the ASASSN-15lh event was a tidal disruption event,” adds Leloudas in this ESO news release. “But it is by far the most likely explanation.”

The paper is Leloudas et al., “The Superluminous Transient ASASSN-15lh as a Tidal Disruption Event from a Kerr Black Hole,” accepted by Nature Astronomy (preprint).