OSIRIS-REx to Hunt for Earth ‘Trojans’

The so-called ‘trojan’ asteroids that cluster at 60° ahead and behind the planet Jupiter make up a surprisingly populous category. Consider that thus far we have found only one trojan at Earth’s Lagrangian points, while over 6000 have been discovered in Jupiter’s orbit. The total number of trojans larger than 1 km in diameter associated with Jupiter has been estimated to be about 1 million, which matches up well with objects of equivalent size in the main asteroid belt. These days ‘trojans’ can also refer to similar bodies associated with other planets. We know, for example, of about 20 trojans involved with Neptune.

That solitary Earth trojan, 2010 TK7, was discovered oscillating around Earth’s L4 Lagrangian point in 2010 by the NEOWISE team using NASA’s Wide-field Infrared Survey Explorer spacecraft. The object has a diameter of about 300 meters; its oscillations take it back and forth on a nearly 400 year cycle that at times puts it close to opposite the Sun with respect to the Earth. On the other side of its elongated loop of the L4 point, it can close to within about 20 million kilometers of Earth.

What catches the eye here is that 2010 TK7’s orbit may have, within the past 2000 years, oscillated about the L5 Lagrangian point instead of L4. This seems to be an unstable libration, a fact that makes predicting its future course problematic. That’s why I’m interested in what scientists at the University of Arizona are doing with the OSIRIS-REx mission. Between February 9 and 20, the spacecraft’s onboard camera suite will be activated to search for other Earth trojans. 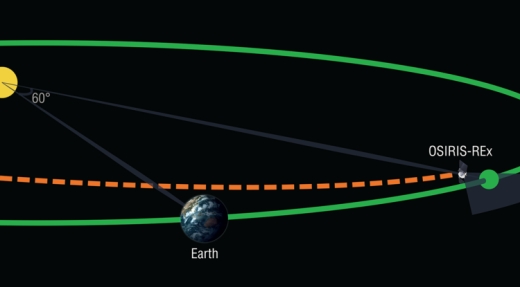 Image: In February 2017, the OSIRIS-REx spacecraft will undertake a search for Earth-Trojan asteroids while on its outbound journey to the asteroid Bennu. Earth trojans are asteroids that share an orbit with Earth while remaining near a stable point 60 degrees in front of or behind the planet. (Illustration: OSIRIS-REx/UA).

The problem with Earth’s trojans, assuming there is more than one, is that they are hard to find because from the Earth’s vantage point, they appear close to the Sun. OSIRIS-REx will deploy its MapCam imager to scan the regions where we might expect trojans to exist. The observations have a tactical purpose as well — consider them a warm-up for the encounter with the asteroid Bennu (1999 RQ36), the target of OSIRIS-REx. Checking for rocky material near Bennu will be critical as the spacecraft closes in for surface mapping in 2018. The mission will also attempt to return a sample of the asteroid to the Earth.

From a University of Arizona news release:

“The Earth-Trojan asteroid search provides a substantial advantage to the OSIRIS-REx mission,” said Dante Lauretta, OSIRIS-REx principal investigator and professor of planetary science at the Lunar and Planetary Laboratory. “Not only do we have the opportunity to discover new members of an asteroid class, but more importantly, we are practicing critical mission operations in advance of our arrival at Bennu, which ultimately reduces mission risk.”

So we may learn soon whether more Earth trojans exist, perhaps choosing one day to mine them for rare elements, although 2010 TK7 is not itself a good candidate for such operations (at least early on) because of its highly inclined orbit. Other near-Earth asteroids present better options. 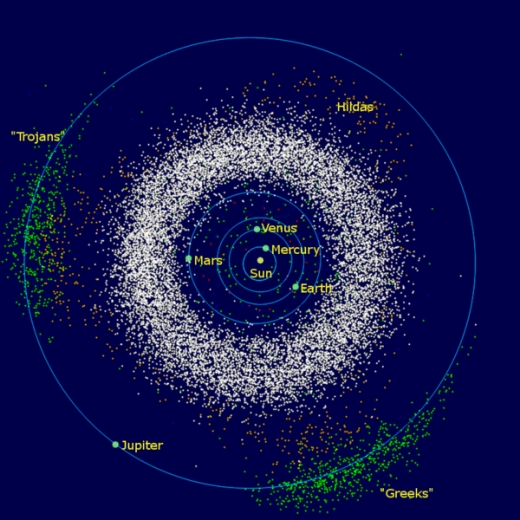 Image: The inner Solar System, from the Sun to Jupiter. Also includes the asteroid belt (the white donut-shaped cloud), the Hildas (the orange “triangle” just inside the orbit of Jupiter), the Jupiter trojans (green), and the near-Earth asteroids. The group that leads Jupiter are called the “Greeks” and the trailing group are called the “Trojans” (Murray and Dermott, Solar System Dynamics, pg. 107). Credit: Wikimedia Commons.

And on the matter of nearby objects, you’ll recall 3753 Cruithne, a 5 kilometer wide asteroid whose orbit, an overlapping horseshoe, is not related to the kind of oscillations around the Lagrangian points associated with trojans. Another non-trojan near-Earth companion is (469219) 2016 HO3, considered by scientists to be a ‘quasi-satellite’ rather than a trojan. These asteroids are on curious and interesting orbits, and the suspicion is that we’ll find a good many more such objects in coming days.

Next post: Surviving the Journey: Spacecraft on a Chip