A 1.8 meter telescope at the summit of Haleakalā on Maui is the first instrument in use at the Pan-STARRS (Panoramic Survey Telescope & Rapid Response System) observatory. Pan-STARRS recently completed a digital survey of the sky in visible and infrared wavelengths that began in May of 2010, a project that surveyed the entire sky visible from Hawaii over a period of four years, scanning it 12 times in each of five filters. The result is a collection of 3 billion separate sources, including not just stars and galaxies but numerous transient, moving and variable objects. All told, we’re dealing with about 2 petabytes of data.

Now we learn that data from the survey is being made available worldwide. Ken Chambers, director of the Pan-STARRS observatories, comments:

“The Pan-STARRS1 Surveys allow anyone to access millions of images and use the database and catalogs containing precision measurements of billions of stars and galaxies. Pan-STARRS has made discoveries from Near Earth Objects and Kuiper Belt Objects in the Solar System to lonely planets between the stars; it has mapped the dust in three dimensions in our galaxy and found new streams of stars; and it has found new kinds of exploding stars and distant quasars in the early universe.”

How heartening it is to see extensive information on more than 3 billion sources now becoming publicly available. The catalog of four years of observations is being rolled out in two phases, the first being the release of the ‘Static Sky,’ which presents the average of each of the observing epochs. For every object, in other words, we get an average value for its position, brightness and colors — it will also be possible to get the stack image in each of the observed colors, while galaxies will include further information. Next year, the plan is to release the full database giving information and images for each individual epoch.

Image: This compressed view of the entire sky visible from Hawaii by the Pan-STARRS1 Observatory is the result of half a million exposures, each about 45 seconds in length, taken over a period of 4 years. The shape comes from making a map of the celestial sphere, like a map of the Earth, but leaving out the southern quarter. The disk of the Milky Way looks like a yellow arc, and the dust lanes show up as reddish brown filaments. The background is made up of billions of faint stars and galaxies. If printed at full resolution, the image would be 2.4 kilometers long, and you would have to get close and squint to see the detail. Credit: Danny Farrow, Pan-STARRS1 Science Consortium and Max Planck Institute for Extraterrestial Physics.

As Centauri Dreams readers know, our focus here has been predominantly on objects relatively near to the Sun — one of our purposes, after all, is to consider interstellar probes and their potential targets. On that score, we learn this from Thomas Henning (Max Planck Institutes for Astronomy, Heidelberg):

“Based on Pan-STARRS, researchers are able to measure distances, motions and special characteristics such as the multiplicity fraction of all nearby stars, brown dwarfs, and of stellar remnants like, for example white dwarfs. This will expand the census of almost all objects in the solar neighbourhood to distances of about 300 light-years.”

There is definitely an exoplanet component here. Henning continues:

“The Pan-STARRS data will also allow a much better characterization of low-mass star formation in stellar clusters. Furthermore, we gathered about 4 million stellar light curves to identify Jupiter-like planets in close orbits around cool dwarf stars in order to constrain the fraction of such extrasolar planetary systems.”

In terms of protecting our planet, Pan-STARRS devoted part of its four-year survey to searching for hazardous asteroids, an effort that proved so successful that following the end of the survey, NASA began using the telescope and its 1.4 Gigapixel camera (GPC1) for further asteroid investigations. Researchers believe that over 90 percent of near-Earth objects larger than 1 kilometer have already been found, making the current focus of the Near Earth Object program the discovery of objects larger than 140 meters. Clearly, Pan-STARRS can help. 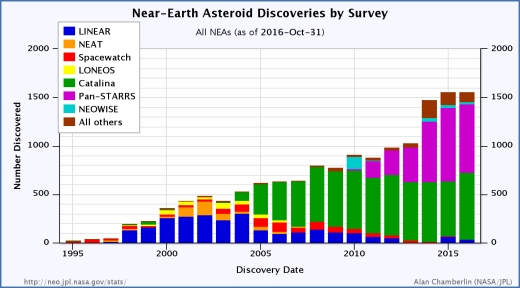 Image: Contributions of various astronomical surveys to the discovery of near-Earth asteroids, showing totals for NEAs of all sizes. Credit: Alan B. Chamberlin/Jet Propulsion Laboratory/NASA.

From a much broader perspective, PAN-STARRS has mapped our galaxy at a level of detail the MPIA is saying has never been achieved before, offering ‘a deep and global view’ of a significant fraction of the Milky Way’s plane and disk, areas that surveys generally avoid because of the complexity of these dense and dusty regions. In M31, the closest neighboring galaxy, the survey has detected several microlensing events and numerous Cepheid variables. The next step, according to this MPIA news release, is to measure redshifts of galaxies and other cosmological objects to analyze the distribution of galaxies in three dimensions, data that can provide constraints on our standard cosmological model.