Hitchhiker to the Outer System?

Years ago at the Aosta conference on interstellar studies, Greg Matloff told attendees about an interesting way to travel the Solar System. If the goal is to get to Mars, for example, it turns out that there are two objects — 1999YR14 and 2007EE26 — that pass close to both Earth and Mars, each with transit time of about a year. Let me quote from Greg’s paper:

Since orbital characteristics are known for a few thousand NEOs, it is reasonable to assume that about 0.1% of the total NEO population could be applied for Earth-Mars or Mars-Earth transfers during the time period 2020-2100. Because a few hundred thousand NEOs must exist that are greater in dimension than 10m, hundreds of small NEOs must travel near-Hohmann trajectories between Earth and Mars or Mars and Earth. It seems likely that a concerted search will find one or more candidate NEOs for shielding application during any opposition of the two planets.

The notion is provocative. Could we somehow hitch a ride on one of these objects, taking advantage of its capabilities as a radiation shield by digging into its surface and exploiting its resources along the way? And maybe we can look further than Mars. In 2014, a NEO called 2000WO148 swings by the Earth enroute to the main belt asteroid Vesta in 2043. The question becomes, are there other NEOs on interesting trajectories that might be of use in our explorations?

I was reminded of the NEO hitchhike idea this morning while reading about another interesting object. NEOWISE detected 2016 WF9 in late November of 2016. Here we have a true sightseer. 2016 WF9 approaches the orbit of Jupiter at its furthest point from the Sun, and then, over just under five years, swings inward, coming in past the main asteroid belt and the orbit of Mars to move just inside the orbit of the Earth before heading back out.

We get closest approach to Earth’s orbit on February 25th of this year, although at 51 million kilometers, this object hardly poses a danger to our planet, nor will it in the foreseeable future. Whether 2016 WF9 is an asteroid or a comet is not known. What we know is that it is between 0.5 and 1 kilometer across, and has low reflectivity, as do many dark objects in the main asteroid belt. Although in a comet-like orbit, 2016 WF9 lacks the dust and gas we normally associate with a comet. James ‘Gerbs’ Bauer (JPL) is deputy chief investigator for NEOWISE:

“2016 WF9 could have cometary origins. This object illustrates that the boundary between asteroids and comets is a blurry one; perhaps over time this object has lost the majority of the volatiles that linger on or just under its surface.” 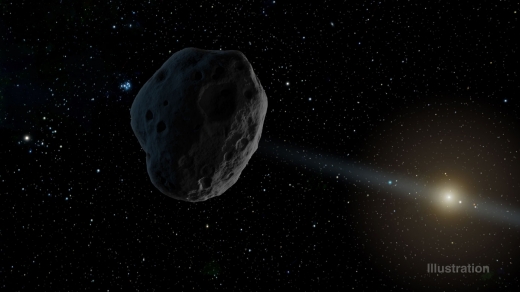 Image: An artist’s rendition of 2016 WF9 as it passes Jupiter’s orbit inbound toward the sun. Credit: NASA/JPL-Caltech.

Another object recently spotted by NEOWISE is indeed thought to be a comet, releasing dust as it nears the Sun. In the first week of the new year, C/2016 U1 NEOWISE will be in the southeastern sky shortly before dawn as seen from the northern hemisphere, reaching perihelion on January 14 inside the orbit of Mercury. Although it’s impossible to say for sure, it may become bright enough to be visible in binoculars, according to this JPL news release.

Since NEOWISE was reactivated in December of 2013, it has discovered either 9 or 10 comets, depending on what 2016 WF9 turns out to be. It 2016 WF9 is found to be an asteroid, then it would be the 100th discovered since reactivation. The original mission, the asteroid and comet-hunting part of the Wide-Field Infrared Survey Explorer (WISE) mission, discovered 34,000 asteroids. 31 of its discoveries pass within 20 lunar distances, and 19 are thought to be more than 140 meters in size, but reflect less than 10 percent of incident sunlight. They are objects as dark as new asphalt, absorbing most visible light but re-emitting energy at infrared wavelengths that the NEOWISE detectors can readily study.

For those interested in digging into these matters further, the NEOWISE data release, with access instructions and supporting documentation, is here. And on the fictional side, Kim Stanley Robinson’s novel 2312 looks at terraformed asteroids in terms of both habitats and intra-system transportation in an evolving space infrastructure.