Fast Radio Bursts (FRBs) are problematic. Since their discovery about a decade ago, the question has been their place of origin. These transient pulses last no more than milliseconds, yet they emit enormous energies, and we’ve had only the sketchiest idea where they came from. Now we learn, from an announcement at the 229th meeting of the American Astronomical Society in Grapevine, Texas, that a repeating source of FRBs has been spotted. That makes tracing the burst back to its source and characterizing it an ongoing proposition.

“We now know that this particular burst comes from a dwarf galaxy more than three billion light-years from Earth,” says Shami Chatterjee, of Cornell University. “That simple fact is a huge advance in our understanding of these events.” Papers on the work are being presented in Nature as well as Astrophysical Journal Letters.

Research behind the investigation of FRB 121102 has been mounted by an international team of astronomers, representing a spread of instruments that is important because a single-dish detection cannot target the object’s location. Because it repeats, this burst allows telescopes separated by large distances to home in on it and investigate it at various wavelengths.

The FRB was discovered at Arecibo, but observations with the Very Large Array in New Mexico have found a total of nine radio bursts from this source. Observations using the 8-meter Gemini North instrument on Mauna Kea have been able to pinpoint the host galaxy, which comes in at a redshift value that puts its distance at over 3 billion light years. Between Arecibo, the VLA and the European VLBI Network (EVN), astronomers have now been able to determine the position of the burst to a fraction of an arcsecond, more than 200 times as accurate as previous measurements. An ongoing and persistent source of weak radio emission is also found in the same region. 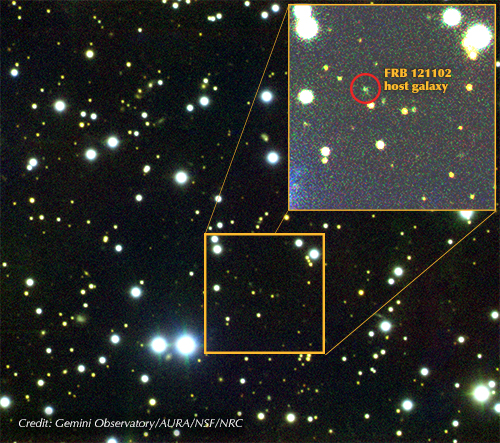 Image: Gemini composite image of the field around FRB 121102 (indicated). The dwarf host galaxy was imaged, and spectroscopy performed, using the Gemini Multi-Object Spectrograph (GMOS) on the Gemini North telescope on Maunakea in Hawai’i. Data were obtained on October 24-25 and November 2, 2016. Credit: Gemini Observatory/AURA/NSF/NRC.

Remember that until this event, only the Parkes Radio Telescope in Australia had detected FRBs, and only a small number at that. Now we are talking not only about locating the source in visible light but associating it with a radio source. Benito Marcote works at JIVE (Joint Institute for VLBI in Europe), which includes a 100-meter radio telescope in Effelsberg, Germany.

“With a bit of luck,” says Marcote, “we were able to detect bursts from FRB 121102 with the EVN and now we know that the origin of the bursts is right on top of the persistent radio source… We think that the bursts and the continuous source are likely to be either the same object or that they are somehow physically associated with each other.”

This FRB, at least, is now known incontrovertibly to have an origin far outside our own galaxy, although the galaxy itself is a surprise. It’s a small dwarf galaxy younger than ours, one that may be able to produce more massive stars than we see in the Milky Way. One possibility is that FRB 121102 is from the collapsed remnant of such a star. Shriharsh Tendulkar (McGill University) is lead author of one of the papers studying the event.

“The host galaxy for this FRB appears to be a very humble and unassuming dwarf galaxy, which is less than 1% of the mass or our Milky Way galaxy. That’s surprising. One would generally expect most FRBs to come from large galaxies which have the largest numbers of stars and neutron stars — remnants of massive stars. This dwarf galaxy has fewer stars, but is forming stars at a high rate, which may suggest that FRBs are linked to young neutron stars. There are also two other classes of extreme events — long duration gamma-ray bursts and superluminous supernovae — that frequently occur in dwarf galaxies, as well. This discovery may hint at links between FRBs and those two kinds of events.”

A burst originating from the region near a massive black hole in the galaxy’s core — an active galactic nucleus emitting jets of material — is a candidate for FRB 121102. And as data continue to accumulate, any periodicity found in future observations may point to the involvement of a rotating neutron star. Further entangling the story is a key question: Can we assume that all FRBs we’ve thus far detected have the same origins, or are we actually detecting more than one kind of cosmic event? Given that FRB 121102 is the only one of 18 known FRBs that repeats, we may be looking at different physical processes at work.