Discovered as recently as 1994, the Sagittarius dwarf spheroidal galaxy is a satellite of the Milky Way, and one with an interesting history. One of the nearest of the dwarf galaxies, the Sagittarius dwarf lies 25 kiloparsecs (roughly 82,000 light years) from the center of the Milky Way, and has passed through the disk of the parent galaxy more than once. The result: We see what a new paper on this object calls a ‘stream of tidally stripped stars’ that wraps completely around the celestial sphere. Our own Sun, in fact, is close enough to the Sgr galaxy’s orbital plane that it lies within the width of what can be called the debris tail.

What astronomers would like to do is to reconstruct the orbital history of this interesting dwarf galaxy, something Marion Dierickx (Harvard-Smithsonian Center for Astrophysics), working with her PhD advisor Avi Loeb (Harvard) have now managed through computer simulations. Dierickx and Loeb simulated the movements of the Sgr dwarf for the past 8 billion years, varying factors like the initial velocity and angle of approach to the Milky Way. As expected, these variables have a major effect on the orbit and the resulting stellar stream. Each passage around the Milky Way has pulled the Sgr dwarf apart, costing it component stars.

Matching their models with current observations, the researchers have learned that over time, the dwarf galaxy, which begins the simulations with 10 billion times the mass of the Sun (about one percent of the mass of the Milky Way), loses a third of its stars and nine-tenths of its dark matter. The stripping of this material from the Sgr dwarf produced three streams of stars reaching as far as one million light years from the center of the Milky Way. These streams have become one of the largest structures observable on the sky.

The simulation presented here includes stellar overdensities at distances of up to ∼ 250 − 300 kpc, extending beyond the MW virial radius [the radius within which the density perturbation that will become a galaxy is collapsing]. We provide their predicted positions on the sky, heliocentric distances and line of sight velocities for possible future observational searches. The most distant known stars of the MW coincide with our predicted streams in both position and small radial velocities. If verified observationally, the distant branches of the Sgr stream would be the farthest-ranging stellar stream in the MW halo known to date. 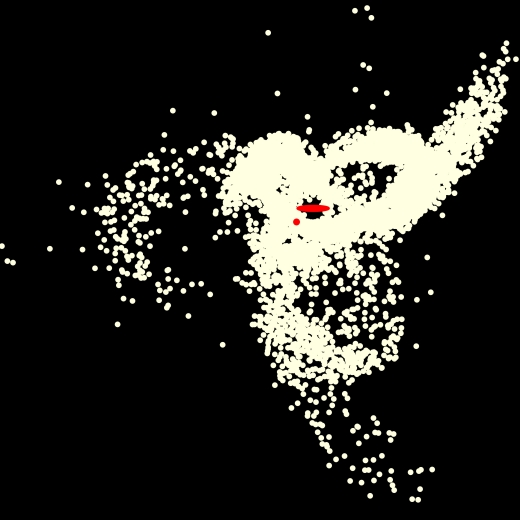 Image: In this computer-generated image, a red oval marks the disk of our Milky Way galaxy and a red dot shows the location of the Sagittarius dwarf galaxy. The yellow circles represent stars that have been ripped from the Sagittarius dwarf and flung far across space. Five of the 11 farthest known stars in our galaxy were probably stolen this way. Marion Dierickx / CfA.

The cosmological landscape that can emerge from work like this is striking. As the paper notes, we should be able to use the Panoramic Survey Telescope & Rapid Response System (Pan-STARRS) datasets to drill deeper into the location of these streams, and future data from the Large Synoptic Survey Telescope (LSST) will offer mapping of the outer galactic halo at visible wavelengths. The Wide Field Infrared Survey Telescope (WFIRST) will produce useful new data in the infrared. With all of these tools, we can probe the outer edges of the Milky Way, in conjunction with existing missions like Gaia. As the paper notes:

The Gaia mission will accurately map a large volume of the MW at smaller Galactocentric radii. With a complete picture of the MW mass distribution from the solar neighborhood to the outskirts of the halo, we will be able to place our Galaxy and the Local Group in a cosmological context.

Note that the 11 farthest known stars in the Milky Way are about 300,000 light years out, well beyond the galaxy’s spiral disk. About half of these are evidently stars captured from the Sagittarius dwarf galaxy, while the rest may have been pulled from a different dwarf galaxy. Says Dierickx, “The star streams that have been mapped so far are like creeks compared to the giant river of stars we predict will be observed eventually.”

The paper is Dierickx & Loeb, “Predicted Extension of the Sagittarius Stream to the Milky Way Virial Radius,” accepted at the Astrophysical Journal (preprint).