We have a lot to learn about Fast Radio Bursts (FRBs), a reminder that the first of these, the so-called Lorimer Burst (FRB 010724) was detected only a decade ago. Since then we’ve found 16 others, all thought to be at cosmological distances. The 2015 detection of FRB 150418, at first thought to have left an afterglow, has now been traced to an active galactic nucleus powered by a supermassive black hole. FRB 121102 appears to be a rare case of a repeating FRB (about which more a bit later). The distances involved and the brightness of the FRBs have led to source hypotheses ranging from gamma ray bursts to massive neutron stars. 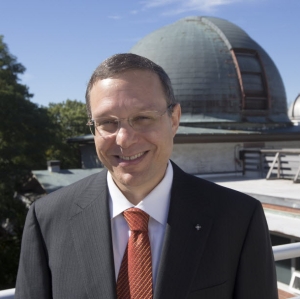 But as Avi Loeb (Harvard University) speculates in a new paper slated to appear in Astrophysical Journal Letters, we could conceivably be dealing with an engineering phenomenon rather than a natural one. What Loeb and Manasvi Lingam, a Harvard postdoctoral fellow at Harvard’s School of Engineering, discuss is whether FRBs could be interpreted as artificial beams set up as an infrastructure for pushing lightsails.

Analyzing the distance of the beam sources through their dispersion measures — the delay of radio frequencies as they sweep through charged particles between the Earth and the source — Loeb and Lingam go on to look at the spectra of FRBs and find them consistent with an artificial origin. Indeed, FRBs can be analyzed as the result of energetic natural processes, but we can equally well work out their parameters in terms of engineering requirements.

If an extraterrestrial civilization were using the energy of a star to power these beams, and if water were being used as a coolant, such beamers, though enormous, would not violate known physics. The paper extracts a minimum aperture diameter to maintain the operation, finding it to be roughly twice the diameter of the Earth, meaning that the beamer would be an object on the order of a planet, a large ‘super-Earth’ or even a ‘mini-Neptune.’ And in keeping with the speculative nature of the inquiry, the authors point out that we can also consider beam emitters along the lines of the Stapledon-Dyson spheres that have been postulated to use stellar system materials to build artifacts surrounding and enveloping the host star.

(Let me digress to note approvingly the authors’ use of ‘Stapledon-Dyson spheres’ in place of the more common ‘Dyson spheres.’ I heartily approve of this tribute to the great philosopher and science fiction writer Olaf Stapledon, who developed the idea in works like Star Maker (1937), and think I will start using the term on Centauri Dreams).

The power involved in such a beamer could push a payload of a million tons, and the paper speculates that if a beam were indeed being used to power a spaceship, it would have to be a large one, perhaps the kind of ‘worldship’ imagined in science fiction, though not one as large as some of the worldships that have been discussed in the interstellar literature. As to what we would see of this operation on Earth, the motion of the beamer relative to the receding sail would be changing relative to the observer, which means we would detect no more than a brief flash, although powering a lightsail would require the transmitter to focus its beam continuously. 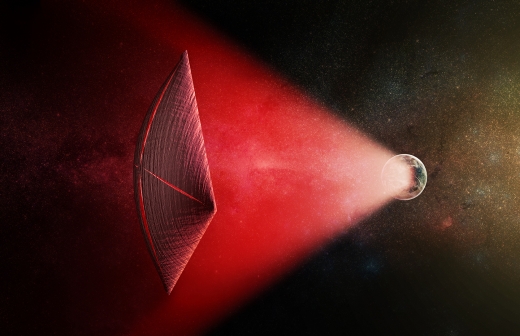 Image: An artist’s illustration of a light-sail powered by a radio beam (red) generated on the surface of a planet. The leakage from such beams as they sweep across the sky would appear as Fast Radio Bursts (FRBs), similar to the new population of sources that was discovered recently at cosmological distances. M. Weiss/CfA.

These are fascinating speculations, but what can we do to delve further into the origin of FRBs? The paper offers multiple ways into the problem:

It should be possible to distinguish between FRBs of natural and artificial (light sail) origin based on the expected shape of the pulse, as the beam sweeps by to power the light sail (Guillochon & Loeb 2015). More specifically, the sail would cast a moving shadow on the observed beam, thereby leading to a diffraction pattern and multiple peaks in the light curve based on the sail geometry (Manchester & Loeb 2016). A series of short symmetric bursts would be observed as the beam’s path intersects with the observer’s line of sight (Guillochon & Loeb 2015). Hence, looking for similar signatures in the signal could help determine whether FRBs are powered by extragalactic civilizations (although the use of a broad range of frequencies might smear these signals).

Here, then, is a target for Breakthrough Listen or other SETI initiatives, which Loeb and Lingam advocate should direct their attention toward the repeating FRB 121102, the only source known to repeat. Continuing study of this source is reasonable because we would expect astrophysical explosions of the kind advanced by some theorists to be single events, while artificial sources like lightsail beamers or beacons can repeat in the course of their normal operations.

Another interesting thought: Other models of FRBs that assume natural phenomena like gamma-ray bursts would have an FRB occurrence rate determined by the formation rate of the massive stars that produce the bursts. If, on the other hand, FRBs really are artificial and have a planetary origin, then their rate would be set by the number of planets with advanced civilizations (this draws on an interesting discussion in the paper on the upper bound of extraterrestrial civilizations — fewer than 104 FRB-producing civilizations in a galaxy like our own). Complicating this, however, is the issue of whether all FRBs have the same origin — perhaps we should focus only on repeating FRBs as possibly artificial.

For that matter, as Loeb and Lingam point out, a given civilization could set up more than one beamer, especially if it had reached a state as advanced as Kardashev II or III. As we continue investigating FRBs, it’s worthwhile remembering that 104 FRBs are now thought to occur in our sky each day. Working out detection rates for galaxies within 100 Gpc3, the authors calculate that each galaxy has a probability of 10-5 FRBs per day. We might expect one from within our own galaxy every 300 years or so, a spectacular event if it occurred anywhere within 20 parsecs, and one that could “…reveal everything that can be known about the true origin of FRBs, and thereby settle this FRB origin debate once and for all.”

It’s a fascinating discussion, and one that makes me wonder whether other signals in our astronomical data at different wavelengths might be similarly interpreted. As to the nature of such investigations, Avi Loeb makes this statement in a CfA news release:

“Science isn’t a matter of belief, it’s a matter of evidence. Deciding what’s likely ahead of time limits the possibilities. It’s worth putting ideas out there and letting the data be the judge.”

A sound reminder indeed of how to proceed in such speculative realms. The paper is Loeb and Lingam, “Fast Radio Bursts from Extragalactic Light Sails,” accepted for publication at The Astrophysical Journal Letters (preprint).

Previous post: HD 219134: A Nearby System with Multiple Transits