Beyond their obvious value in advancing our knowledge, astronomical discoveries can be thought of as exercises for the imagination, making us think about what we would see if we were actually near the phenomenon being observed. The view from a planet deep in a globular cluster can only be spectacular, and has been the subject of my own musings for many years. But this morning’s topic, a white dwarf star in a fantastically tight orbit around a black hole, leaves my imagination reeling. Just what would a scenario like the one playing out in the globular cluster 47 Tucanae, some 14,800 light years from Earth, look like up close?

Here we find, thanks to the space-based Chandra X-Ray Observatory and NuSTAR (Nuclear Spectroscopic Telescope Array), as well as the Australia Telescope Compact Array, a binary that consists of an apparent white dwarf orbiting a black hole every 28 minutes. The presence of large amounts of oxygen in the system gives weight to the idea that the companion is indeed a white dwarf, as an abundance of oxygen is a characteristic feature of white dwarfs.

The orbit here is so tight that the star is separated from the apparent black hole by a distance about 2.5 times the separation between the Earth and the Moon.

“This white dwarf is so close to the black hole that material is being pulled away from the star and dumped onto a disk of matter around the black hole before falling in,” says lead author Arash Bahramian (University of Alberta and Michigan State University). “Luckily for this star, we don’t think it will follow this path into oblivion, but instead will stay in orbit.” 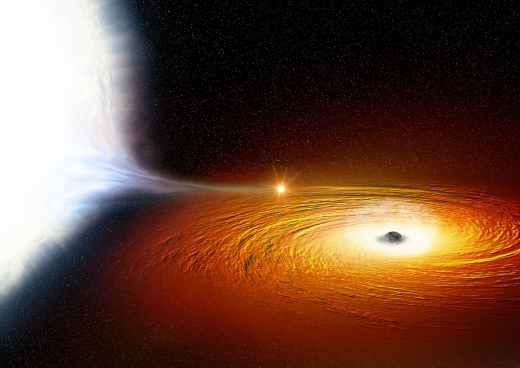 Image: An artist’s impression of a white dwarf star (left) in orbit around a black hole and so close that much of its material is being pulled away. There is a hotspot where the gas from the white dwarf hits the disc of matter swirling around the black hole. The black hole itself is surrounded by a cloud of ionised gas, which contains large amounts of oxygen. Credit: X-ray: NASA/CXC/University of Alberta/A.Bahramian et al.; Illustration: NASA/CXC/M.Weiss.

The orbital determination is made from the changes of brightness observed on a regular 28 minute cycle by Chandra. And the likely outcome of this tight pairing for the white dwarf is that it will eventually become something even more unusual. Says James Miller-Jones (Curtin University, Western Australia and the International Centre for Radio Astronomy Research):

“We think the star may have been losing gas to the black hole for tens of millions of years and by now has now lost the majority of its mass. Over time, we think that the star’s orbit will get wider and wider as even more mass is lost, eventually turning into an exotic object similar to the famous diamond planet discovered a few years ago.”

Small digression: More commonly known as a ‘carbon planet,’ an exotic world like the one Miller-Jones mentions draws on work from Marc Kuchner (NASA GSFC) and Sara Seager (MIT), who investigated the possibility that carbon-rich, oxygen-poor protoplanetary disks might form such planets. Here the visualization exercise gets another workout: Layers of diamond could exist within the mantle, possibly erupting to the surface during volcanic episodes. In addition to mountains of diamond, the surface could contain liquid or frozen tar and methane.

Although 55 Cancri e is frequently cited as a possible carbon planet, pulsar planets have also been suggested as candidates, and in connection with today’s story, it’s worth pointing out that carbon planets are also speculated to be found in globular clusters, where stars have a higher carbon-to-oxygen ratio than the Sun — hence Miller-Jones’ allusion to diamond planets in the quotation above. As to the binary in the globular cluster 47 Tucanae, called X9, the origin scenarios being discussed are intriguing. From the paper:

Low mass X-ray binaries (LMXBs) are systems in which a compact object [neutron star (NS) or black hole (BH)] accretes matter from a low mass companion (typically a main sequence star) through Roche-lobe overflow or wind-fed accretion (from a red giant). It has been long noticed that the population of LMXBs per unit mass in globular clusters (GCs) is orders of magnitude higher than that of the Galactic field… This overabundance has been associated with the high stellar density in GCs. While most LMXBs in the Galactic field are formed through binary evolution of primordial binaries, it has been shown that in GCs, the dominant channel to form LMXBs is through encounters. These scenarios include tidal capture by an NS or BH, exchange of a compact object into a primordial binary, or collision of a compact object with a red giant…

Here too the visualization game stretches the imagination. A black hole encounters a red giant star, with gas from the star being ejected and the remnants of the red giant’s atmosphere becoming a companion to the black hole in the form of a white dwarf. Whether or not we are looking at the result of such an encounter in X9, or whether this is actually a white dwarf paired with a neutron star that is stripping material from its companion, is not entirely clear, though X9 lacks many features of this kind of transitional millisecond pulsar.

“We’re going to watch this binary closely in the future, since we know little about how such an extreme system should behave,” says co-author Vlad Tudor (Curtin University/ICRAR). “We’re also going to keep studying globular clusters in our galaxy to see if more evidence for very tight black hole binaries can be found.”

Before now, the closest star around a likely black hole was the system called MAXI J1659-152, where the orbital period is 2.4 hours, much longer than the 28 minutes we see in X9. There is also evidence for a similar system in the galaxy M49 (about 56 million light years away in the Virgo Cluster). That one is believed to have an orbit even tighter than X9’s, but Miller-Jones points out that there is no direct measurement of its period, making this work on X9 the first time that an orbital period this short in a system containing a likely black hole has ever been measured. An interesting exercise for the imagination indeed.

Although the gravitational waves from this system are too weak to detect with present ground-based observatories, future space-based platforms may be able to detect them.