Unexpected things can happen when you’re looking for exoplanets. Ask Kevin Luhman (Penn State), whose search for free-floating planets in the Orion Nebula is now telling us something interesting about star formation in general. In a small region dominated by young stars called the Kleinmann-Low Nebula, some 1300 light years from Earth near the center of the Orion Nebula complex, Luhman and team have come across evidence of a multiple star system whose members have flown rapidly apart due to gravitational interactions with their peers.

Luhman’s team was using the Hubble instrument’s Wide Field Camera 3 to run the planet-hunting survey, working with Massimo Robberto (Space Telescope Science Institute) and a group of international colleagues. A star referenced only as ‘source x’ turned up in a comparison between 2015 imagery in the infrared and infrared observations made in 1998 with the Hubble telescope’s Near Infrared Camera and Multi-Object Spectrometer. The surprise: ‘Source x’ had changed its position substantially in those 17 years.

Working out the star’s velocity, the team concluded that it was moving at about 210,000 kilometers per hour. Moving backwards in time, the researchers could chart the star’s travels, and found that in the 15th Century AD, ‘source x’ had been in the same location in the Kleinmann-Low Nebula as two other runaway stars, known as Becklin-Neugebauer (BN) and “source I,” that are now traveling in opposite directions from each other. Discovered in the infrared in 1967, BN has been found to be moving at 95,000 kilometers per hour, while ‘source I’ is clocked at 35,000 kilometers per hour, deeply shrouded in dust and previously observed only through radio telescope studies. 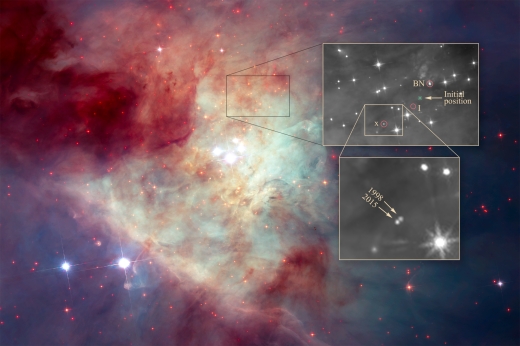 Image: This dramatic view of the center of the Orion Nebula reveals the home of three speedy, wayward stars that were members of a now-defunct multiple-star system. The stellar grouping broke apart 500 years ago, flinging the three stars out of their birthplace. The box just above the Trapezium Cluster outlines the location of the three stars. A Hubble close-up view of the stars is shown at top right. The birthplace of the multi-star system is marked “initial position.” Two of the stars — labeled BN, for Becklin-Neugebauer, and “I,” for source I — were discovered decades ago. Source I is embedded in thick dust and cannot be seen. The third star, “x,” for source x, was recently discovered to have moved noticeably between 1998 and 2015, as shown in the inset image at bottom right. Source x is traveling at an unusually high speed of 210,000 kilometers per hour, which is 30 times faster than the velocity of most stars in the nebula. Credit: NASA, ESA, K. Luhman (Penn State University), and M. Robberto (STScI).

“The new Hubble observations provide very strong evidence that the three stars were ejected from a multiple-star system,” says Luhman. “Astronomers had previously found a few other examples of fast-moving stars that trace back to multiple-star systems, and therefore were likely ejected. But these three stars are the youngest examples of such ejected stars. They’re probably only a few hundred thousand years old. In fact, based on infrared images, the stars are still young enough to have disks of material leftover from their formation.”

All three of these stars are making their way out of the Kleinmann-Low Nebula at high speed, and they may be representative of what happens in young stellar clusters, where the spacing between infant stars is tight. Luhman’s team believes the Orion Nebula could have spawned numerous such interactions, with young stars being ejected from it in great numbers. As to the process at work, it probably results from two members of a multiple star system forming a tight binary or even merging, releasing enough gravitational energy to push all the stars in the system outward and creating a powerful outflow of material. And this bit from the paper on this work is interesting:

Some aspects of the interaction that ejected BN and sources I and x remain unclear, such as how these stars were able to retain or reform their circumstellar disks (Goddi et al. 2011; Plambeck & Wright 2017) and the source of their current kinetic energy… [T]he latter has been previously attributed to the gravitational potential energy released by a pair of stars forming a tight binary or merging, likely in what is now source I. The energy produced by the merger of stars with a total mass of source I (e.g., 1 and 6 M⊙) is an order of magnitude greater than the kinetic energy of the three stars, so that remains a plausible explanation.

Note that comment about circumstellar disks — how could stars undergoing this kind of gravitational upheaval maintain their disks? The paper’s earlier reference to the problem seems understated, and references another star, ‘source n,’ explained below: “It is challenging to explain the presence of the circumstellar disks around BN and sources I and n if they experienced interactions that were sufficiently close to produce the rapid ejection of BN.”

Challenging indeed, and doubtless the subject of further study. Such disks do indeed mark the youth of the stars involved, but we have a lot to learn about how these interactions would affect material around the stars themselves. Reminding us of the complexity of such analysis, the ‘source n’ mentioned above is yet another star with high proper motion, but one which Luhman and colleagues believe did not participate in the events affecting the other three.

Image: This three-frame illustration shows how a grouping of stars can break apart, flinging the members into space. The first panel shows four members of a multiple-star system orbiting each other. In the second panel, two of the stars move closer together in their orbits. In the third panel, the closely orbiting stars eventually either merge or form a tight binary. This event releases enough gravitational energy to propel all of the stars in the system outward, as shown in the third panel. Credit: NASA, ESA, and Z. Levy (STScI).

It’s not often that we run into stellar phenomena that we can relate to events within our own written history, but here we have a date — 1475 plus or minus 6 years — that takes us back to a time when the Wars of the Roses convulsed England. Somewhere not long before the death of Edward IV, with his brother Richard III waiting in the wings and all hell about to (again) break loose, this distant star system was itself convulsed, its component parts flung into the deep. Finding ‘source x’ and relating it to its fast-moving cousins BN and ‘Source I” answers the puzzle of their motion and reminds us how violent early stellar evolution can be.

The paper is Luhman et al., “New Evidence for the Dynamical Decay of a Multiple System in the Orion Kleinmann-Low Nebula,” Astrophysical Journal Letters Vol. 838, No. 1 (16 March 2017). Abstract / preprint.