Learning about the changes that occur on a cometary surface over time was a primary goal of the European Space Agency’s Rosetta mission, which orbited comet 67P/Churyumov-Gerasimenko between August 2014 and September 2016. This was a period when the comet was swinging through the inner Solar System as it closed to perihelion. Now we have vivid evidence of the changes the comet experienced as recorded by Rosetta.

Consider a report in Nature Astronomy, which chronicles outburst activity on the comet associated with the spectacular collapse of a cliff face. Located in the Seth region of the comet on a prominent cliff edge was a 70-meter long fracture about 1 meter wide. During the period of observation, as Rosetta drew ever nearer perihelion, buried ices turned to vapor at an increasing rate, pulling dust out into space, with occasional outburst activity. Rosetta observed an outburst on July 10, 2015 that was associated with this region. 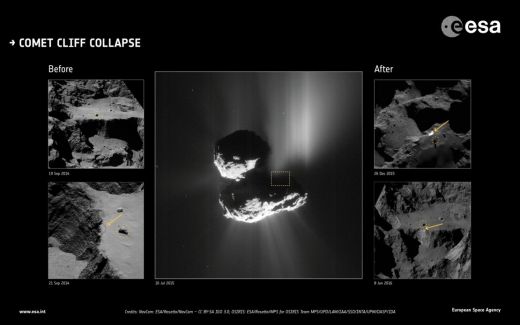 Image: Comet cliff collapse before and after. Credit: ESA.

A scant five days later, the place where the fracture had been now showed a bright, sharp edge, with a host of meter-sized boulders at the foot of the 134-meter high cliff that had not been there before. The assumption is that the cliff collapse and outburst were linked. Water ice buried deep inside the comet was thus exposed, to gradually turn to vapor in the following months. The exposed face was found to be six times brighter than the average surface brightness of the cometary nucleus in the period immediately after the event.

Activity like this has a profound effect on the cometary surface. As this ESA news release explains, the material that fell from the cliff and accumulated at its foot weighs in at about 10,000 tonnes, with about 100 tonnes being lost into space. “We see a similar trend at the foot of other cliffs that we have not been so fortunate to have before and after images, so this is an important validation of cliff collapse as a producer of these debris fields,” says Maurizio Pajola (NASA Ames/University of Padova, Italy), who led the new study.

Researchers believe that daily and seasonal temperature variations may have driven fractures deeper into the subsurface of the comet than was previously thought, making it more vulnerable to the temperature changes of its journey into the inner system. What we have here is a priceless look before and after a major event, confirming the importance of cliff collapses in molding the surface of a comet and perhaps provoking outburst activity. Adds Pajola:

“If the fractures permeated volatile-rich layers, heat could have been transferred to these deeper layers, causing a loss of deeper ice. The gas released by the vapourising material could further widen the fractures, leading to a cumulative effect that eventually led to the cliff collapse. Thanks to this particular event at Aswan, we think that the cumulative effect led by strong thermal gradients could be one of the most important weakening factors of the cliff structure.”

We also have a new study in Science examining the broad range of terrain change on Comet 67P during Rosetta’s two years of close observation. Here numerous processes appear to be at work, each with the potential for working serious change. In situ weathering involves the weakening of materials through the heating and cooling cycle, both daily and seasonal, that can result in gas outflows and cliff collapses like the one we just examined. But we also have forces created by the comet’s spin rate as it moved toward perihelion, thought to have created a new fracture observed by Rosetta.

A previously known fracture some 500 meters long runs through the comet’s neck in the region called Anuket. Although observed in August of 2014, the fracture was found to have become extended by another 30 meters by December of that year. And by June of 2016, the new fracture, 150 to 300 meters long, had opened parallel to the original fracture. 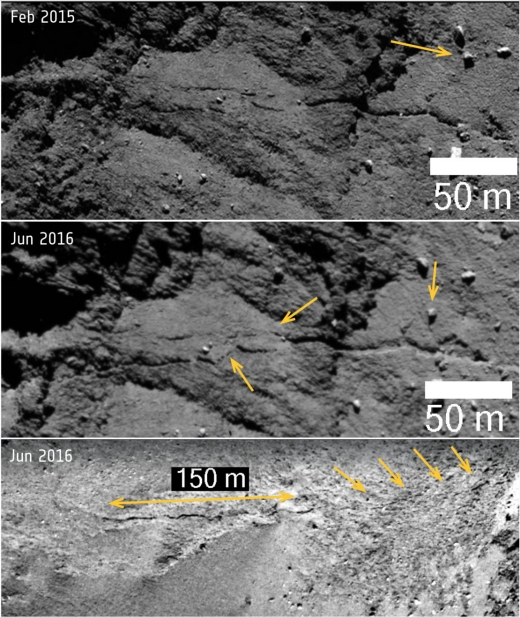 We also see movement in boulders on the surface of Comet 67P, perhaps linked to the fracture activity, perhaps not. In one case, a boulder 30 meters wide and weighing 12,800 tonnes was observed to have moved 140 meters in the comet’s Khonsu region. This movement is thought to have occurred during the perihelion period, when several outbursts were observed close to the boulder’s position. Erosion of the nearby surface could be the culprit here, allowing the boulder to roll downslope. Equally possible: A strong outburst could have lifted it to its new location. 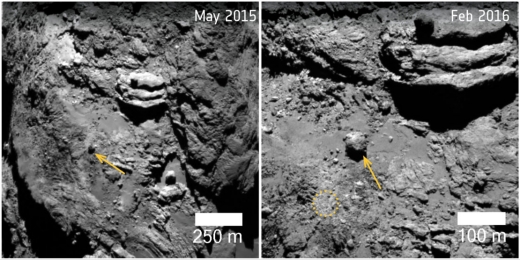 Sublimation is a major cause of erosion, as is falling dust returning to the surface after an outburst, both of which can sculpt the cometary landscape. In some areas, scarps in several smooth plains have been seen to retreat by tens of meters — as much as a few meters a day during perihelion. Meanwhile, in regions of smooth plains like Comet 67P’s Imhotep, new circular features are found that were once obscured by surface material. The likely cause here is sublimation of underlying ice, which has removed up to 3 meters of material in one area.

The movement on the surface of the comet is strikingly swift. In the comet’s neck region, a smooth area once likened to sand dunes on Earth when first observed, ripple formations began showing expanding circular features that reached diameters of 100 meters over a period of three months. These then faded and gave rise to new sets of ripples. In addition, honeycomb-like features have been observed in the Ma’at region on the comet’s northern hemisphere, showing a marked increase in roughness as perihelion approached.

Rosetta shows us that this comet’s surface is geologically active on short and long time-frames, although its overall appearance has not significantly changed, based on ground-based studies conducted over the last few years. Ramy El-Maarry (University of Colorado, Boulder), who led the study, speculates that earlier perihelion passages were far more active, when the comet would have held a higher amount of volatiles and the major landforms on the surface would have attained their current configuration. Whatever the case, Rosetta’s study of Comet 67P’s changing surface vividly shows a surface of growing fractures, evolving cliffs and boulders in motion, a scene we had expected but are now able to analyze in detail for the first time.