The Challenges of Przybylski’s Star

About 370 light years away in the constellation Centaurus is a variable star whose spectrum continues to raise eyebrows. The star is laced with oddball elements like europium, gadolinium, terbium and holmium. Moreover, while iron and nickel appear in unusually low abundances, we get short-lived ultra-heavy elements, actinides like actinium, plutonium, americium and einsteinium. Hence the mystery: How can such short-lived elements persist in the atmosphere of a star? Discovered in 1961 by the Polish-American astronomer Antoni Przybylski, these traits have firmly placed Przybylski’s Star in the Ap class of chemically peculiar stars. Its very name is a cause of continuing conversation.

Well, true enough. If Przybylski’s Star is a challenge to understand, it’s also a challenge to pronounce. Charles Cowley (University of Michigan), who offers a detailed analysis of the star online, met Przybylski in 1964, asking him how to say his name. “He obliged me,” Cowley writes, “and I thought I detected a slight “puff” at the beginning of the sound, which Mike Bessel writes is like “jebilskee”, with the “je” as if it were in French. The initial “P” gets minimal sound.” I think we can go with that, although I’ve seen a variety of pronunciations online.

What we’d like to know once we can say the star’s name is how the heavy elements observed here have come about. A neutron star is one solution, a companion object whose outflow of particles could create heavy elements in Przybylski’s Star, and keep them replenished. The solution seems to work theoretically, but no neutron star is found anywhere near the star. In a new paper, Vladimir Dzuba (University of New South Wales) and colleagues suggest that the actinides in Przybylski’s Star are evidence of the slow decay of superheavy elements.

The idea is that there may be a so-called island of stability involving elements with 114 or more protons in their nuclei, super-heavy elements that nonetheless are long-lived. If these exist, then the short-lived plutonium, einsteinium and the rest found in the star would simply be decay products. We may be, in other words, about to discover a new isotope not produced as a fleeting sample in an experiment but as an element observed in nature. That in itself is not unusual: Penn State’s Jason Wright reminds us that helium was first found in the Sun. 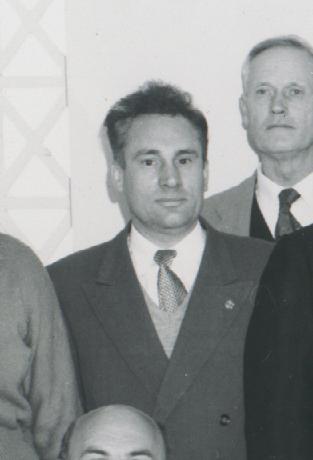 Wright has written a four-part discussion of Przybylski’s Star that begins with Przybylski’s Star I: What’s that? and continues through internal links. As with everything Wright does, it’s informative and also hugely entertaining. Moreover, it takes us however briefly into SETI terrain as Wright raises the point that advanced civilizations might use stars to store nuclear waste, a notion broached by Daniel Whitmire and David Wright as far back as 1980, and considered as well by Carl Sagan and Iosif Shklovskii in their Intelligent Life in the Universe (Holden-Day, 1966). Whitmire and Wright even opined that the most likely stars in which we would find such pollution were late A stars like Przybylski’s Star.

So we can note that this unusual star could fit into the artifact SETI category even as we continue to figure out the natural reasons why it should show the spectrum that it does. Wright adds this interesting note about the entire field of so-called Dysonian SETI, which scours our astronomical data for anomalies that could be the signs of the workings of an advanced civilization. As we continue to see in the controversy over Boyajian’s Star, this area of study can be frustrating, especially when one is in the business of working out what we might find:

This just goes to show that artifact SETI is hard. When people stick their necks out and make bold, silly-sounding predictions about unambiguous technosignatures like this (or like megastructures), I suspect they usually don’t actually expect them to come true. And then when they do come true (as in Przybylski’s Star, KIC 12557548, or Boyajian’s Star) not only are their prediction papers rarely cited (which is, I think, inappropriate), but there’s always immediately a flurry of perfectly natural explanations that arrive to explain things without aliens (which is, I think, totally appropriate).

We keep looking nonetheless because no matter what their origin, stars like Przybylski’s Star are fascinating in their own right. Meanwhile, Dzuba and team hope to pursue the island of stability elements and the idea that the actinides in Przybylski’s Star are the result of their slow and replenishing decay:

We hope that this work provides a motivation for a further progress in the measurements of the transition frequencies for superheavy elements, calculations of the isotope shifts and search for the corresponding transitions in astrophysical spectra.

Dzuba believes the next step should be a search for five elements with atomic numbers of 102 or more: nobelium (102), lawrencium (103), nihonium (113) and flerovium (114), as recounted in this New Scientist report on their work. The challenge is daunting, because while such elements could be part of the radioactive decay chain of stable super-heavy elements on the ‘island of stability,’ their half-lives are so short that their spectra are not well defined.

The original paper on Przybylski’s Star is Przybylski, “HD 101065-a G0 Star with High Metal Content,” Nature Vol. 189, Issue 4766 (1961), pp. 739 ff. (abstract). Amusingly enough, the paper was hidden in plain sight on the Internet for some time, invisible to ADS searches because the author’s name had been misspelled. That has now been fixed. The Dzuba paper is “Isotope shift and search for metastable superheavy elements in astrophysical data,” (preprint).