Our catalog of distant, highly energetic events continues to grow. On the Fast Radio Burst (FRB) front, we have the welcome news that the Molonglo radio telescope some 40 kilometers from Canberra, Australia has undergone extensive re-engineering, a project that is paying off with the detection of three new FRBs. The telescope’s collecting area of 18,000 square meters and an eight square degree field of view make it ideal for such work. 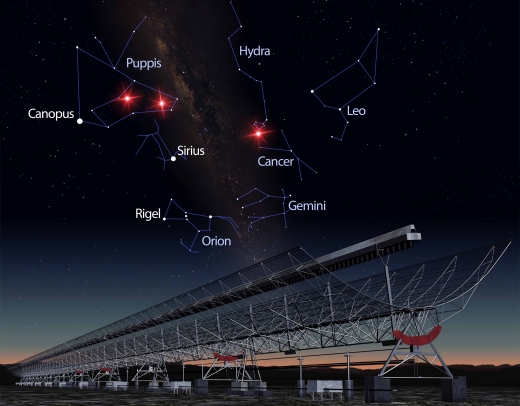 You’ll recall that Fast Radio Bursts are millisecond long, intense pulses that can appear out of nowhere with a luminosity a billion times greater than anything we have observed in the Milky Way. The phenomenon was noted for the first time a decade ago at the Parkes radio telescope in New South Wales. The sources remain enigmatic, but Manisha Caleb, a PhD candidate at Australian National University, has been developing software to examine the 1000 TB of data that is being produced daily at the Molonglo site. The new FRBs are the result.

But Molonglo (the Molonglo Observatory Synthesis Telescope, to give its full name, usually shortened to MOST) is a parabolic, cylindrical antenna consisting of 88 bays, each of these made up of four identical modules, to produce 352 independent antennae. The upgrade to the Molonglo instrument is known as UTMOST. The researchers used the array in a 180-day survey of the Southern sky, carrying out up to 100 hours of follow-up for each FRB, though no repeating bursts were seen. A repeating burst at UTMOST, or an FRB simultaneously detected at Parkes and UTMOST, would allow a localization of a few arcseconds.

From the paper (note that “ is the symbol for arcseconds):

In this paper we present the first interferometric detections of FRBs, found during 180 days on sky at UTMOST. The events are beyond the ≈ 104 km near-field limit of the telescope, ruling out local (terrestrial) sources of interference as a possible origin. We demonstrate with pulsars that a repeating FRB seen at UTMOST has the potential to be localised to ≈ 15” diameter error circle, an exciting prospect for identifying the host. 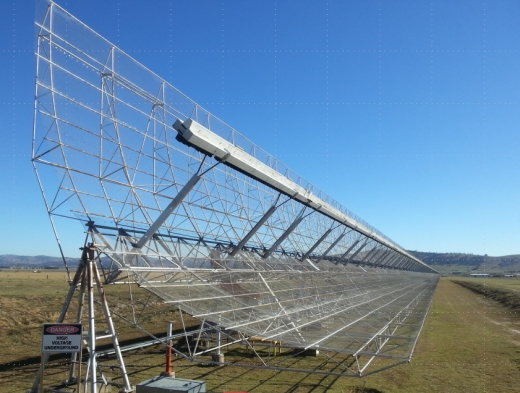 Image: View of the MOST at the end of the East arm looking West. Two arms, each 800 meters long, together have a collecting area of circa 18,000 square meters. MOST is the largest radio telescope in the Southern hemisphere. Credit: Swinburne University/UTMOST.

The recent discoveries point to a new ability to locate FRBs in the sky, allowing us to link them to specific galaxies, a feat that has been accomplished only once so far (see Pinpointing a Fast Radio Burst). The paper is Caleb et al., “The first interferometric detections of Fast Radio Bursts,” accepted at Monthly Notices of the Royal Astronomical Society (preprint). For more, see this UTMOST news release.