I always look at the NASA Innovative Advanced Concepts (NIAC) awards with interest as well as a bit of nostalgia. When I began researching the book that would become Centauri Dreams, NIAC was an early incentive. Then known as the NASA Institute for Advanced Concepts, it was under the direction of Robert Cassanova (this was back around 2002), and its archive of funded studies was a treasure house of deep space ideas, from antimatter extraction in planetary magnetic fields to exoplanet imaging through starshades. I spent days going through any number of reports and interviewed many NIAC study authors.

You can still see the NIAC reports from that era on the older site (go to NIAC Funded Studies). The current NIAC site makes the point that the program looks for “non-traditional sources of innovation that study technically credible, advanced concepts that could one day ‘change the possible’ in aerospace.” And it’s here that we get the 2017 Phase 1 proposals, a $125,000 award for a nine month period that can result in a two-year Phase II follow-up.

2017 proposals with specifically interstellar intent include one from JPL’s John Brophy, who describes what he calls “A Breakthrough Propulsion Architecture for Interstellar Precursor Missions.” Brophy is looking for a way to deliver a high spacecraft velocity change (delta-V) without using much propellant. He envisions a lithium-fueled ion thruster with a specific impulse of 58,000 seconds (compare this with the Dawn spacecraft’s 3,000 seconds).

How to achieve this? By use of a 10-km orbital laser array that allows his craft to operate far beyond the point where sunlight loses its useful effect, the array feeding a lightweight, photovoltaic array aboard the spacecraft that can produce the electric power to drive the thrusters. Brophy believes laser power in this configuration can be converted to electric power at an efficiency of 70 percent, to produce an output voltage of 12 kV. The lithium fueled system would be capable of a 12-year flight-time to 500 AU, close to the point where gravitational lensing begins to get interesting. Time to Pluto: 3.6 years, and Jupiter in a single year.

So much depends upon that laser array, a ground-based version of which is under active study by the Breakthrough Starshot effort. The problems of implementing such an array are daunting, but its uses if ever built are so game-changing that the investigation continues. Breakthrough Starshot itself works with a 30-year horizon, so we are not talking about near-term implementation, but rather sketching out concepts a laser array could make feasible. 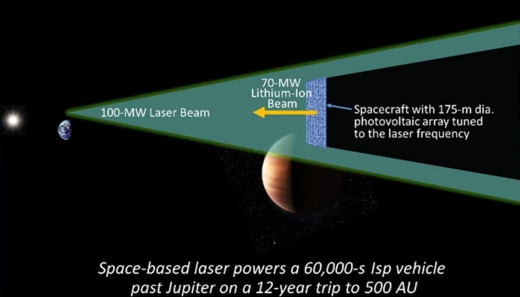 Like Brophy’s proposal, Heidi Fearn’s “Mach Effects for In Space Propulsion: Interstellar Mission” is a Phase 1 initiative, an interesting entry because it shows NIAC beginning to open to the kind of breakthrough propulsion concepts NASA once investigated through its Breakthrough Propulsion Physics project (led by Tau Zero founder Marc Millis). In this case, the work goes toward a so-called Mach Effect Thruster (MET). Mach effects are transient variations in the rest masses of objects as predicted by standard physics where Mach’s principle applies. Proponents believe they offer the possibility of producing thrust without the ejection of propellant, as discussed in James Woodward’s Making Starships and Stargates: The Science of Interstellar Transport and Absurdly Benign Wormholes (Springer-Verlag, 2012).

What Fearn proposes is to investigate such thrusters by continuing the development of laboratory-scale devices while designing and developing power supply and electrical systems that will determine the efficiency of the Mach Effect Thruster. The analytical task is to improve theoretical thrust predictions and build a reliable model of the device. At the theoretical level, this team is definitely talking deep space, with part of the proposal being to:

Predict maximum thrust achievable by one device and how large an array of thrusters would be required to send a probe, of size 1.5m diameter by 3m, of total mass 1245 Kg including a modest 400 Kg of payload, a distance of 8 light years (ly) away. 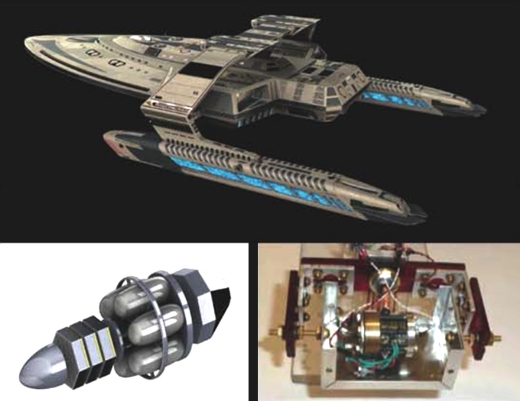 Can such a device work? Remember, we are in the realm of advanced concepts, where the technology is at the TRL 1 level, but the benefits of working with a thruster that does not expel fuel mass could make high velocities possible, enough of an incentive to pursue these early steps. Mach’s principle relates the motion of the farthest objects in the universe to the local inertial frame or, as Hawking has it, “Local physical laws are determined by the large-scale structure of the universe.” The principle is vague enough that Hermann Bondi and Joseph Samuel have compiled eleven different variations on it, all of which could be called Machian.

JPL’s Slava Turyshev is behind a Phase 1 study called “Direct Multipixel Imaging and Spectroscopy of an exoplanet with a Solar Gravity Lens Mission,” a study focusing on a mission to exploit the Sun’s gravitational lens, where (at 550 AU and beyond) the Sun’s gravity has bent the light of objects directly behind it to allow powerful lensing effects.

Long-time Centauri Dreams readers will know that the Italian physicist Claudio Maccone has championed a gravitational lens mission called FOCAL for many years, proposing it to the European Space Agency and writing numerous papers as well as two books on the topic (there is much available in the archives here about this concept). The definitive book, Deep Space Flight and Communications: Exploiting the Sun as a Gravitational Lens (Springer, 2009) lays out the principles of such lensing, the history of its study, and potential solutions to the many imaging issues raised by a space mission. Maccone has discussed lensing as one solution to the communications challenges of Breakthrough Starshot.

What Turyshev is proposing is to study not the means of getting to 550 AU and beyond, but the question of spacecraft operations at such distances. From the proposal description:

Specifically, we propose to study I) how a space mission to the focal region of the SGL (Solar Gravitational Lens) may be used to obtain high-resolution direct imaging and spectroscopy of an exoplanet by detecting, tracking, and studying the Einstein’s ring around the Sun, and II) how such information could be used to unambiguously detect and study life on another planet. 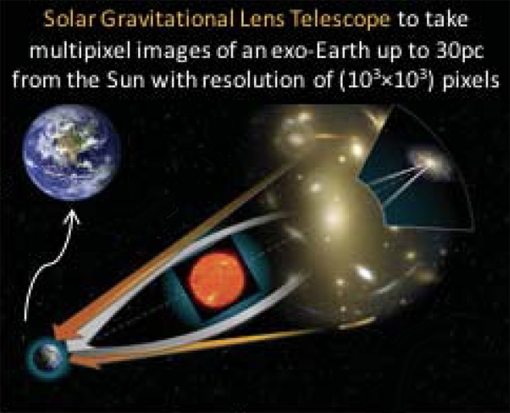 Other proposals of interest are “Pluto Hop, Skip and Jump Global,” from Benjamin Goldman (Global Aerospace Corporation), an innovative study of a Pluto lander with a novel approach to landing and in situ science; “Gradient Field Imploding Liner Fusion Propulsion System” from Michael LaPointe (NASA MSFC), exploring magneto-inertial fusion in a new configuration that could lend itself to in-space propulsion; and “Fusion-Enabled Pluto Orbiter and Lander,” from Stephanie Thomas (Princeton Satellite Systems, Inc.), a Direct Fusion Drive concept based on work under development at the Princeton Plasma Physics Laboratory, and its application in a Pluto orbiter with lander (this one is a Phase II study).

The full list of 2017 Phase I and Phase II selections is here, including Nan Yu’s interesting take at JPL on possible dark energy interactions with a ‘Solar System laboratory.’ Have a look at these and ask yourself which we may still be talking about a decade hence. When I look back to the NIAC studies I examined in 2002 and later, I find many ideas that we wound up discussing at length here on the site, and I wouldn’t be surprised if several of the new selections move on to Phase II status and a great deal of future scrutiny. Which ones will they be?