The ongoing dimming of Boyajian’s Star will result in a flood of new data from a wide variety of instruments worldwide, excellent news for those trying to piece together what is happening here. I hope you saw Tabetha Boyajian’s interview with David Kipping over the weekend, but if not, you can see it archived here. I tracked the story on Twitter all weekend, and as I did so, I was reminded of the recent news about Fomalhaut, where massive comets may explain what we are seeing in the star’s debris disk. You’ll recall that early in the work on Boyajian’s Star, comets were one explanation for its anomalous light curves, and it will be interesting to see whether the cometary hypothesis can stand up to the influx of new information.

Interesting as well to look at the new data in terms of Kepler’s, asking whether this is a periodic dimming, and hence not the result of intervening material between us and the star.

Latest photometry from last night; this event seems to have ended, but remember than in Q16 they came in clumps.@tsboyajian pic.twitter.com/serFLLFXL9

We’ll see! And as I continue to keep one eye on my Twitter feed, let me segue into Fomalhaut.

The ALMA radio telescope (Atacama Large Millimeter/submillimeter Array) has given us the first complete view of the star’s prominent circumstellar disk in millimeter-wavelength light. One of the brightest stars in our sky, Fomalhaut (α Piscis Austrini) is about 25 light years from the Sun, an A-class star whose excess emission in the infrared has flagged the presence of a circumstellar disk. We actually have a K-class star here as well (TW Piscis Austrini) and an M-class dwarf (LP 876-10), making up a widely spaced triple system. And around it we have a band of icy dust some 2 billion kilometers wide, circling the star 20 billion kilometers out.

What is striking about the composite image (incorporating Hubble’s optical data in blue as well as the ALMA results) is how well-defined the disk of debris and gas appears. We had earlier ALMA imagery taken when the array was still under construction in 2012 that showed about half of the debris disk, but we now get the complete view, one whose data reveal similarities between cometary material in our own Solar System and the debris around Fomalhaut.

“ALMA has given us this staggeringly clear image of a fully formed debris disk,” said Meredith MacGregor, an astronomer at the Harvard-Smithsonian Center for Astrophysics in Cambridge, Mass., and lead author on one of two papers accepted for publication in the Astrophysical Journal describing these observations. “We can finally see the well-defined shape of the disk, which may tell us a great deal about the underlying planetary system responsible for its highly distinctive appearance.” 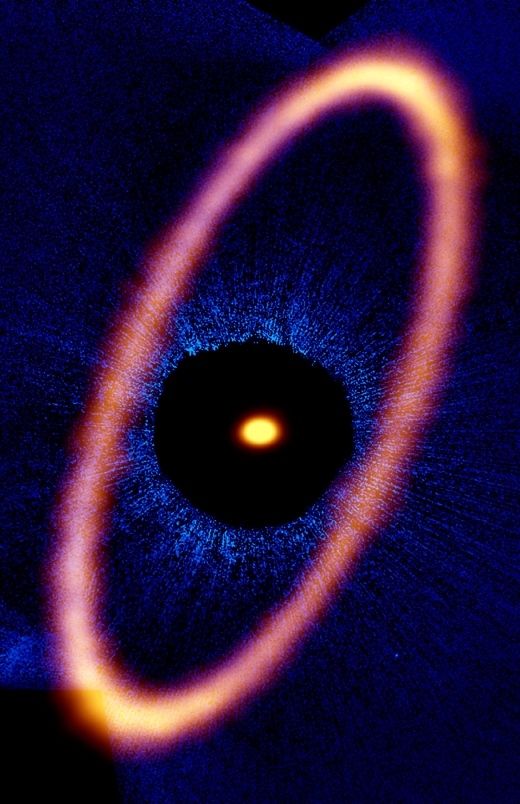 Image: Composite image of the Fomalhaut star system. The ALMA data, shown in orange, reveal the distant and eccentric debris disk in never-before-seen detail. The central dot is the unresolved emission from the star, which is about twice the mass of our sun. Optical data from the Hubble Space Telescope is in blue; the dark region is a coronagraphic mask, which filtered out the otherwise overwhelming light of the central star. Credit: ALMA (ESO/NAOJ/NRAO), M. MacGregor; NASA/ESA Hubble, P. Kalas; B. Saxton (NRAO/AUI/NSF).

You’ll also note in both images in today’s post that the disk seems brighter in two places, at about the 1 and 7 o’clock positions. This is intriguing: It tracks a prediction made last year by MIT’s Margaret Pan, who contributed to both the papers that have just appeared on the ALMA work. Pan pointed out that the dusty material in the Fomalhaut disk travels more slowly at apoapsis, when the disk is at its furthest from the star. The slowdown allows denser concentrations of dust to form, which show up as bright millimeter-wavelength emission.

This is a relatively young system at 440 million years old, making it about a tenth the age of our Solar system, and we may be seeing a system going through its own version of our Late Heavy Bombardment. Some 4 billion years ago, the Earth was frequently impacted by asteroids and comets, material left over from the formation of the system.

The Fomalhaut system is also familiar in that carbon monoxide shows up strongly in the ALMA findings. The data peg the relative abundance of carbon monoxide and carbon dioxide around Fomalhaut as roughly similar to what we see in comets found in our Solar System. Comet collisions may be releasing the gas in these quantities, perhaps even the impacts of huge comets of the kind that some have suggested around the enigmatic Boyajian’s Star. 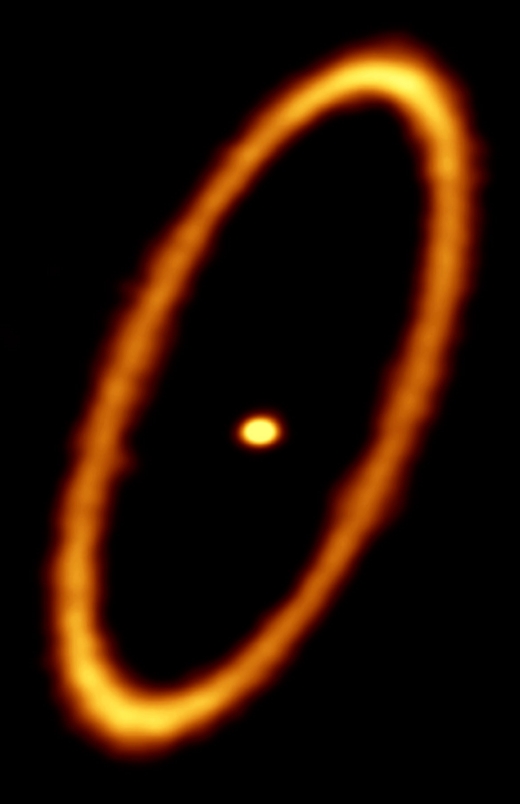 Image: ALMA image of the debris disk in the Fomalhaut star system. The ring is approximately 20 billion kilometers from the central star and about 2 billion kilometers wide. The central dot is the unresolved emission from the star, which is about twice the mass of our sun. Credit: ALMA (ESO/NAOJ/NRAO); M. MacGregor.

We already have an intriguing object here in the form of Fomalhaut b, which has been directly imaged, in a 1700 year highly elliptical orbit with apastron at about 300 AU. It is currently 110 AU from its host. Are there planets within the ring? Evidence points in that direction. The researchers were able to develop computer models that, along with the ALMA data, helped them calculate the width and geometry of the Fomalhaut disk. The disk has similarities to our own Kuiper Belt, as the paper notes, and its shape is telling:

The Fomalhaut debris disk is similarly narrow to the main classical Kuiper Belt in our own Solar System, which is radially confined between the 3:2 and 2:1 orbital resonances with Neptune implying a fractional width of ∼ 0.18 (Hahn & Malhotra 2005). In contrast, both the HD 107146 (Ricci et al. 2015) and η Corvi (Marino et al. 2017) debris disks appear much broader with fractional widths of > 0.3.

That very narrowness has been seen as an indicator of planets, and not just by the authors of the current papers. But compelling as the evidence is, it is not yet conclusive:

Boley et al. (2012) propose that the narrow ring observed in Fomalhaut may also result from interactions with planets, namely two shepherding planets on the inner and outer edges of the belt. If the structure of the belt is indeed due to truncation by interior and exterior planets, we would expect to see sharp edges. However, given the resolution of our observations (∼ 10 AU) compared with the width of the belt (∼ 14 AU), we are unable to place any strong constraints on the sharpness of the disk edges.

Seeing the Fomalhaut disk at his level of detail gives us insights into early planet formation as we try to tease out the underlying planetary system that seems to be emerging. And the chemical similarities within this band and comets in our own system tell us that the processes occurring here may well parallel conditions in our own outer system’s infancy.

The papers are Macgregor et al., “A Complete ALMA Map of the Fomalhaut Debris Disk” (preprint) and Matrà et al., “Detection of exocometary CO within the 440 Myr-old Fomalhaut belt: a similar CO+CO2 ice abundance in exocomets and Solar System comets,” accepted at the Astrophysical Journal (preprint).