Do All Stars Form as Binaries?

Interesting news this morning that begins with the Very Large Array in New Mexico, which a team of astronomers has been using to look at star formation. Their target: The Perseus molecular cloud, a stellar nursery about 600 light years from Earth. Clouds like this are sufficiently large (this one is about 50 light years in length) and dense to permit molecules to form, with molecular hydrogen (H2) being the most common, along with carbon monoxide (CO). 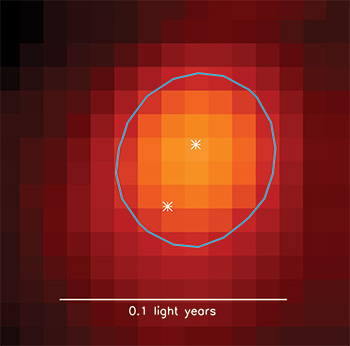 Although we can’t see into them in visible light (they appear as holes in the starry background because dust and gas obscure the stars forming inside, as well as background stars), such molecular clouds are ideally suited for study with radio telescopes. The VLA survey, called VANDAM (VLA Nascent Disk and Multiplicity) surveyed all the young stars in the Perseus cloud, including both single and multiple stars at separations down to < 20 AU. And now a duo of astronomers has supplemented the VLA data with observations from the James Clerk Maxwell Telescope in Hawaii, the latter helping to reveal the clumps of higher density called ‘dense cores’ — think of them as egg-shaped ‘cocoons’ — within which young stars form.

Image: Radio image of a very young binary star system, less than about 1 million years old, that formed within a dense core (oval outline) in the Perseus molecular cloud. According to the new paper, all stars likely form as binaries within dense cores. Credit: SCUBA-2 survey image by Sarah Sadavoy, CfA.

Sarah Sadavoy (Max-Planck-Institut für Astronomie) and Steven Stahler (UC-Berkeley) found 55 young stars in 24 multiple star systems (all but five of these are binary) and 45 single star systems in the Perseus cloud. All the widely separated binaries (> 500 AU) were made up of Class 0 stars (less than 500,000 years old), and were aligned with the long axis of the dense core. The older Class I binary stars (between 500,000 and 1 million years old) were closer together (separations ~ 200 AU) and showed no such alignment.

These alignments may not be random. For the authors have produced a mathematical model that explains the observations, and it’s a model with a twist. What they deduce is that stars like the Sun — all of them — are born with a companion. Says Stahler:

“We ran a series of statistical models to see if we could account for the relative populations of young single stars and binaries of all separations in the Perseus molecular cloud, and the only model that could reproduce the data was one in which all stars form initially as wide binaries. These systems then either shrink or break apart within a million years.”

A wide binary as considered here is one with a separation of more than 500 AU, which would mean that the original binary companion to our Sun, assuming it once existed, would have been about 17 times further out than Neptune is today. Nemesis? Only in that this would have been a companion to our star, though not one that, like the conjectured Nemesis once considered as a hypothesis for driving asteroid collisions with the Earth, stayed in our neighborhood. 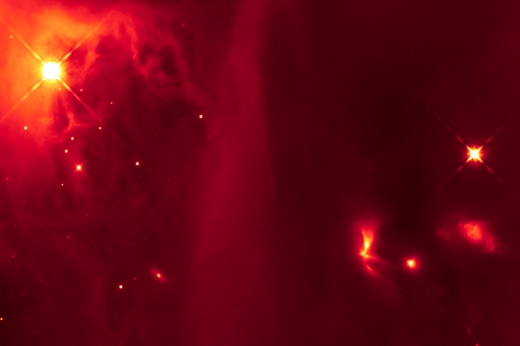 Image: This infrared image from the Hubble Space Telescope contains a bright, fan-shaped object (lower right quadrant) thought to be a binary star that emits light pulses as the two stars interact. The primitive binary system is located in the IC 348 region of the Perseus molecular cloud and was included in the study by the Berkeley/Harvard team. Credit: NASA, ESA and J. Muzerolle, STScI.

“As the egg contracts, the densest part of the egg will be toward the middle, and that forms two concentrations of density along the middle axis. These centers of higher density at some point collapse in on themselves because of their self-gravity to form Class 0 stars. Within our picture, single low-mass, sunlike stars are not primordial. They are the result of the breakup of binaries.”

An interesting result, and keep this in mind (from the paper): “If our model continues to provide a good fit to other star-forming regions, then the mass fraction of dense cores that becomes stars is double what is currently believed.”

In trying to learn how binary and multiple star systems form, we’ve begun to produce computer simulations examining the behavior of collapsing masses of gas, as well as simulating how young multiple stars behave as they emerge from their gas clouds. What this work addresses is the fact that among the population of young stars, binaries exist in higher proportion. The authors point to the need for higher resolution studies in other star-forming regions to continue the systematic analysis of the role of binaries in early stellar evolution.

The paper is Sadavoy and Stahler, “Embedded Binaries and Their Dense Cores,” accepted at Monthly Notices of the Royal Astronomical Society (preprint). This UC-Berkeley news release is helpful.