‘Cosmic Modesty’ in a Fecund Universe

I came across the work of Chin-Fei Lee (Academia Sinica Institute of Astronomy and Astrophysics, Taiwan) when I had just read Avi Loeb’s essay Cosmic Modesty. Loeb (Harvard University) is a well known astronomer, director of the Institute for Theory and Computation at the Harvard-Smithsonian Center for Astrophysics and a key player in Breakthrough Starshot. His ‘cosmic modesty’ implies we should accept the idea that humans are not intrinsically special. Indeed, given that the only planet we know that hosts life has both intelligent and primitive lifeforms on it, we should search widely, and not just around stars like our Sun. 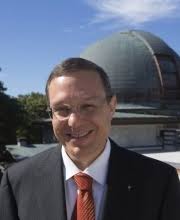 More on that in a moment, because I want to intertwine Loeb’s thoughts with recent work by Chin-Fei Lee, whose team has used the Atacama Large Millimeter/submillimeter Array (ALMA) to detect organic molecules in an accretion disk around a young protostar. The star in question is Herbig-Haro (HH) 212, an infant system (about 40,000 years old) in Orion about 1300 light years away. Seen nearly edge-on from our perspective on Earth, the star’s accretion disk is feeding a bipolar jet. This team’s results, to my mind, remind us why cosmic modesty seems like a viable course, while highlighting the magnitude of the question.

What Lee’s team has found at HH 212 is an atmosphere of complex organic molecules associated with the disk. Methanol (CH3OH) is involved, as is deuterated methanol (CH2DOH), methanethiol (CH3SH), and formamide (NH2CHO), which the researchers see as precursors for producing biomolecules like amino acids and sugars. “They are likely formed on icy grains in the disk and then released into the gas phase because of heating from stellar radiation or some other means, such as shocks,” says co-author Zhi-Yun Li of the University of Virginia.

Every time I read about finds like this, I think about the apparent ubiquity of life’s materials — here we’re seeing organics at the earliest phases of a stellar system’s evolution. The inescapable conclusion is that the building blocks of living things are available from the outset to be incorporated in the planets that emerge from the disk. That certainly doesn’t count as a detection of life, but it does remind us of how frequently the ingredients of life manage to appear. 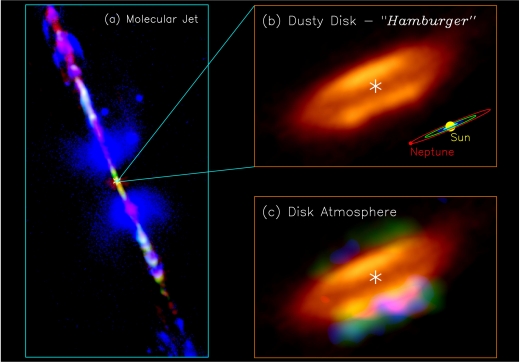 Image: Jet, disk, and disk atmosphere in the HH 212 protostellar system. (a) A composite image for the HH 212 jet in different molecules, combining the images from the Very Large Telescope (McCaughrean et al. 2002) and ALMA (Lee et al. 2015). Orange image shows the dusty envelope+disk mapped with ALMA. (b) A zoom-in to the central dusty disk. The asterisk marks the position of the protostar. A size scale of our solar system is shown in the lower right corner for comparison. (c) Atmosphere of the accretion disk detected with ALMA. In the disk atmosphere, green is for deuterated methanol, blue for methanethiol, and red for formamide. Credit: ALMA (ESO/NAOJ/NRAO)/Lee et al.

In that context, Avi Loeb’s thoughts on cosmic modesty ring true. We’ve been able to extract some statistical conclusions from the Kepler instrument’s deep stare that let us infer there are more Earth-mass planets in the habitable zones of their stars in the observable universe than there are grains of sand on all the Earth’s beaches. Something to think about as you read this on your beach vacation and gaze from the sand beneath your feet to the ocean beyond.

But are most living planets likely to occur around G-class stars like our Sun? Loeb reminds us that red dwarf stars like Proxima Centauri b and TRAPPIST-1, both of which made headlines in the past year because of their conceivably habitable planets, are long-lived, with lifetimes as long as 10 trillion years. Our Sun’s life, by comparison, is a paltry 10 billion years. Long after the Sun has turned into a white dwarf after its red giant phase, living things could still have a habitat around Proxima Centauri and TRAPPIST-1. Says Loeb:

I therefore advise my wealthy friends to buy real estate on Proxima b, because its value will likely go up dramatically in the future. But this also raises an important scientific question: “Is life most likely to emerge at the present cosmic time near a star like the sun?” By surveying the habitability of the universe throughout cosmic history from the birth of the first stars 30 million years after the big bang to the death of the last stars in 10 trillion years, one reaches the conclusion that unless habitability around low-mass stars is suppressed, life is most likely to exist near red dwarf stars like Proxima Centauri or TRAPPIST-1 trillions of years from now.

But of course, one of the reasons for missions like TESS (Transiting Exoplanet Survey Satellite) is to begin to understand the small rocky worlds around nearby red dwarfs, and to determine whether there are factors like tidal lock or stellar flaring that preclude life there. For that matter, do the planets around Proxima and TRAPPIST-1 have atmospheres? There too the answer will be forthcoming, assuming the James Webb Space Telescope is deployed successfully and can make the needed assessment of these worlds.

…very advanced civilizations [Loeb continues] could potentially be detectable out to the edge of the observable universe through their most powerful beacons. The evidence for an alien civilization might not be in the traditional form of radio communication signals. Rather, it could involve detecting artifacts on planets via the spectral edge from solar cells, industrial pollution of atmospheres, artificial lights or bursts of radiation from artificial beams sweeping across the sky.

Changes to the traditional view of SETI abound as we explore these new pathways. In any case, our technologies for making such detections have never been as advanced, and work across the exoplanetary spectrum, such as the findings of Chin-Fei Lee and colleagues, urges us on as we try to relate our own civilization to a universe in which it is hardly the center. As Loeb reminds us, we are orbiting a galaxy that itself moves at ~0.001c relative to the cosmic rest frame, one of perhaps 100 billion galaxies in the observable universe.

Either alternative — we are alone, or we are not — changes everything about our perspective, and encourages us to deepen the search for simple life (perhaps detected in exoplanetary atmospheres through its biosignatures) as well as conceivable alien civilizations. Embracing Loeb’s cosmic modesty, we press on under the assumption that life’s emergence is not uncommon, and that refining the search to learn the answer is a civilizational imperative.

Previous post: Magnetic Reconnection at the ‘Planet of Doubt’