174P/Echeclus: Focus on an Unusual Centaur

Centaurs are intriguing objects, and not just because of the problem in figuring out what they are. For one thing, the farthest points in their orbits take them between the orbits of the outer planets in our Solar System. That makes them unstable, yielding lifetimes on the order of a few million years. They also show characteristics of both asteroids and comets, which makes objects like 174P/Echeclus so intriguing. Discovered in 2000, it was classified as a minor planet before a cometary coma appeared. Thus its current cometary designation.

So what exactly do we have here? In 2005, a large piece of 174P/Echeclus broke off, possibly the result of an impact or, despite a distance at the time of over 13 AU from the Sun, perhaps the release of volatiles. We saw another outburst in 2011 at a distance of 8.5 AU from the Sun. Maria Womack (University of South Florida), who is lead author of a new paper on Echeclus, calls it “a bizarre solar system object,” which sounds about right, though other Centaurs — 2060 Chiron and 166P/NEAT — display comas reminiscent of those in comets. 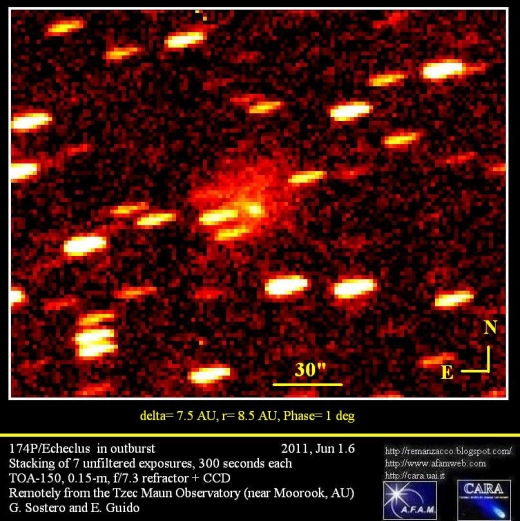 That Centaurs are odd objects is further confirmed by the largest confirmed member of their class, 10199 Chariklo, big enough at 260 km in diameter to be a mid-sized asteroid, and known to have a system of rings. We don’t see any comet-like activity here, but two other Centaurs — 52872 Okyrhoe and 2012 CG — have produced what may have been coma activity in the past. Will any Centaur that moves into the inner system become a comet?

For that matter, why do objects like these produce large, observable emissions while still far from the Sun? The average comet, often rich in frozen volatiles like carbon monoxide, carbon dioxide, hydrogen cyanide and methanol, loses ice through sublimation and produces jets of water vapor and other gases only as it approaches the inner system. Perhaps one reason for the difference, the researchers learned, has to do with the composition of Centaurs.

What Womack and team found at Echeclus is that the object shows levels of carbon monoxide nearly 40 times lower than we would expect from comets at similar distances from the Sun. The implication is that this makes Echeclus, and by implication other Centaurs, more fragile than the average comet. The reason for the deficiency of carbon monoxide is unknown, though it may relate to physical processes that caused the CO to be lost.

The researchers used the Arizona Radio Observatory 10-m Submillimeter Telescope to search for CO at Echeclus in mid-2016, when the Centaur was 6.1 AU from the Sun. They found a production rate of carbon monoxide — Q(CO) — which turned out to be the lowest found in any Centaur, and 5 times lower than the carbon monoxide production found near aphelion. The same CO deficiency shows up in other Centaurs. The quoted segment from the paper below refers to Comet Hale-Bopp and the Centaur 29P/Schwassmann-Wachmann 1 (29P) for comparison:

Our data are consistent with Echeclus being a CO-deficient body, when comet Hale-Bopp’s data at ∼ 6 au is used as a proxy for a relatively unprocessed nucleus. When scaled by surface area and compared with CO measurements from other Centaurs, we see that specific production rates, Q(CO)/D2, from Echeclus and Chiron are ∼ 10-50 times below that of Hale-Bopp, and 29P, which are both known to be CO-rich.

But Centaurs will not yield their secrets easily. As the paper continues, we learn that CO deficiency is not a completely shared characteristic:

The lower CO output of Echeclus and Chiron may mean that they incorporated less CO into their nuclei than many other comets, or they may have lost a significant amount due to devolatilization while in their relatively close-to-the-Sun Centaur orbits. It is puzzling why 29P, another Centaur, is evidently CO-rich. Although no other CO detections exist for other Centaurs, stringent upper limits to their specific production rates show that several other Centaurs are also notably absent of CO outgassing, including Chariklo, 8405 Asbolus, 34842 and 95626.

Then bear in mind that we have evidence for fragments, rings and ring arcs around not just 10199 Chariklo but 29P, 2060 Chiron and Echeclus itself. Thus, as the paper points out, we need to make more measurements of CO production rates and fragmentation activity in other Centaurs to refine our models of their structure. The outer Solar System once again reminds us that our categories for these distant objects are subject to continuing revision.

“These are minor bodies that we are studying, but they can provide major insights,” says Gal Sarid (University of Central Florida), a co-author of the paper. “We believe they are rich in organics and could provide important hints of how life originated.”

Next post: Juno’s Upcoming Run over the Great Red Spot