Although Titan is often cited as resembling the early Earth, the differences are striking. Temperature is the most obvious, with an average of 95 Kelvin (-178 degrees Celsius), keeping water at the surface firmly frozen. Our planet was tectonically active in its infancy, roiled not only by widespread volcanism but also asteroid impacts, especially during the period known as the Late Heavy Bombardment some 4.1 to 3.8 billion years ago.

Throw in the fact that the Earth had high concentrations of carbon dioxide — Titan does not — and it’s clear that we can’t make too broad a comparison between the two worlds. What we do have on Titan, however, is an atmosphere that teems with chemical activity, fueled by light from the Sun and the charged particle environment in the moon’s orbit around Saturn. So we do have a chemistry here that is capable of turning simple organics into more complex ones.

Thus the findings from a new study of archival data using the Atacama Large Millimeter/submillimeter Array (ALMA) are instructive. If we can rule out forms of life as we know them, we can’t exclude combinations that could only form in Titan’s frigid incubator. A potential marker of such chemistry is vinyl cyanide (acrylonitrile), which has been identified in the study and points in interesting directions.

Says lead author Maureen Palmer (NASA GSFC): “The presence of vinyl cyanide in an environment with liquid methane suggests the intriguing possibility of chemical processes that are analogous to those important for life on Earth.” 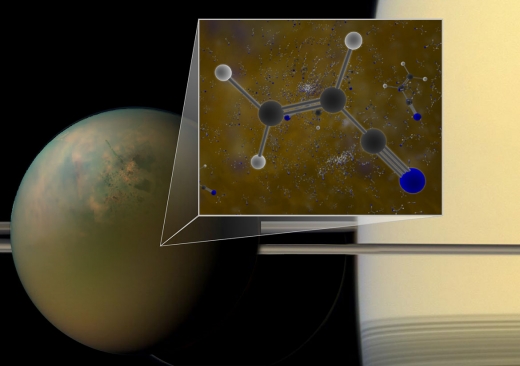 An interesting thought, because the three signals Palmer and team found in millimeter wavelength spectra from ALMA observations in 2014 confirm what Cassini had already hinted at, which in turn reinforce laboratory simulations of Titan’s atmosphere. A surface rife with pools of hydrocarbons — and Titan is a place of methane rains, rivers and seas — could allow molecules of vinyl cyanide to link together, forming membranes that resemble the lipid-based cell membranes found on Earth. Titan’s complex organic molecules along with its nitrogen atmosphere and the presence of carbon-based molecules are provocative ingredients.

… lipid membranes, which are common to Earthly organisms, could not exist in cryogenic methane. Cell membrane–like compartments are crucial for the development of life from a sea of prebiotic reactants. These membranes enclose a small volume of solution, where reactants can be concentrated and (pre)biotic reactions can occur with greater frequency than they would in the dilute environment of an entire lake or sea. They also define individual cells as separate from each other, creating the potential for competition and natural selection.

And a nod to recent computational work on this matter:

Recent simulations have investigated some nitrile species for their potential to form flexible membranes in Titan-like conditions. These simulations suggest that vinyl cyanide (C2H3CN; also known as acrylonitrile or propenenitrile) would be the best candidate species for the formation of these hypothesized cell-like membranes, known as “azotosomes”

And now we have vinyl cyanide confirmed on Titan. At Cornell University, Jonathan Lunine worked with Paulette Clancy on a 2015 paper that discussed molecular simulation and its predictions as windows into prebiotic life conditions. Of the ALMA finding, Lunine says this:

“Researchers definitively discovered the molecule, vinyl cyanide (a.k.a. acrylonitrile), that is our best candidate for a ‘protocell’ that might be stable and flexible in liquid methane. This is a step forward in understanding whether Titan’s methane seas might host an exotic form of life. Saturn’s moon, Enceladus is the place to search for life like us, life that depends on — and exists in — liquid water. Titan, on the other hand, is the place to go to seek the outer limits of life — can some exotic type of life begin and evolve in a truly alien environment, that of liquid methane?”

And let’s not forget what else has been demonstrated by this work. What Lunine, Paulette Clancy and James Stevenson modeled in 2015 was exactly the kind of membrane we are now discussing. The finding of vinyl cyanide thus validates the authors’ 2015 paper, pointing to the value of molecular simulations as an adjunct to experimental and observational data.

The next steps? Further laboratory studies of the reactions involving vinyl cyanide. The authors point out that experimental work on membrane formation in cryogenic methane would help us determine just how viable a pathway this might be for astrobiology. We can also use infrared observations of Titan to study the transport of vinyl cyanide to the surface and map its spatial distribution, especially over the moon’s northern seas and lakes.