Red supergiants are stars more massive than 9 times the mass of the Sun, a late stage of stellar evolution in which the stars’ atmospheres become expansive, while lowering in density. Antares, the brightest star in the constellation Scorpius, is about 12 times as massive as the Sun, but its diameter is 700 times larger. Its mass was once thought to be 15 times that of the Sun, with three solar masses of material being shed during its lifetime. If located in our Solar System, its outer edges would reach somewhere between the orbits of Mars and Jupiter.

Now we have word that scientists using the European Southern Observatory’s Very Large Telescope Interferometer (VLTI) at Paranal Observatory in Chile have been able to map the surface of this star, and to measure the motion of its surface material. What we get out of all this is the best image of the surface and atmosphere of any star other than our own. 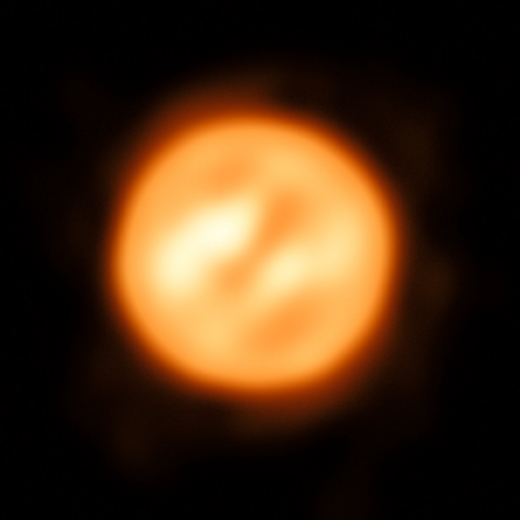 Lead author Keiichi Ohnaka and colleagues were able to create a two-dimensional velocity map of Antares’ atmosphere, using three of the VLTI’s auxiliary telescopes — these are 1.8 meter instruments that feed the interferometer and can be moved from place to place on the VLT platform. The VLTI can combine the light of four different telescopes, using either its 8.2 meter ‘unit’ instruments or the smaller auxiliary telescopes. In this case, three of the auxiliaries were complemented by AMBER, a near-infrared spectro-interferometric instrument.

With the help of the latter, the team was able to make separate images of the surface of Antares over a small range of infrared wavelengths. The ensuing map of the relative speed of atmospheric gases across the Antares disk grew out of calculations revealing the speed differential between gas at different positions on the star, and the average speed of gas over the entire star.

We’d like to know more about how supergiants like Antares lose mass as they enter their final stages. The paper reveals that the distribution of turbulent low-density gas was unexpectedly complex. Its presence much further from the star than predicted could not be explained by convection, which involves the transfer of energy from the core to the outer atmosphere of many stars — the extended atmosphere is much larger than convection models can produce.

Since convection alone cannot explain the density and extension of the atmosphere, some yet-to-be identified process should be in operation to make the atmosphere extended and give rise to the turbulent motions and also perhaps the mass loss. Given that we did not detect a systematic outflow within 1.7 stellar radii, the substantial acceleration of mass loss should take place beyond this radius. The next challenge remains to identify the driving mechanism responsible for the observed turbulent motions.

Thus we move toward applying these techniques to different types of star, now that we have demonstrated the ability to study stellar surfaces and atmospheres in such detail.

And if you’re looking for an Antares reference in science fiction, it would be to the classic Alfred Bester tale The Stars My Destination, in which protagonist Gully Foyle ‘jaunts’ (teleports) into the system (one of many in which he pops up), to find the star “…encircled by two hundred and fifty planetoids of the size of Mercury, of the climate of Eden.” Work that out if you can. And if you haven’t read Bester yet, this one needs to be at the top of the reading stack.