NASA’s OSIRIS-REx spacecraft, now on a two year outbound journey to the near-Earth asteroid Bennu, is a good deal closer to home than you might think. At play is a gravity assist maneuver that will take the craft past the Earth on September 22nd, propelling OSIRIS-REx into the orbital plane of its target. As of August 25th, the spacecraft was 16.6 million kilometers from the Earth.

Twenty-four days and a wake-up! You know I'm getting close when the one-way light time is under a minute.https://t.co/rACre4nDe4 pic.twitter.com/uvKBaNoqYM

The OSIRIS-REx team is reporting that a course adjustment burn was performed on August 23rd, a successful correction that marked the first time the spacecraft’s attitude control system (ACS) had been used in what is being called a ‘turn-burn-turn’ sequence. It’s a precision maneuver requiring the momentum wheels on OSIRIS-REx to turn the spacecraft so its thrusters are lined up for the burn. When the burn is complete, the momentum wheels turn the spacecraft back to its previous orientation. Thrust is monitored by an on-board accelerometer.

The maneuver on August 23rd lasted a scant 77 seconds, successfully changing the velocity of the spacecraft by 47.9 centimeters per second while using 0.46 kilogram of fuel. Precision work indeed, but just a warm-up for what will be needed at the asteroid, whose gravitational field is so weak that the smallest changes in velocity will allow exploration and mapping.

Its inclination adjusted — and there is the possibility of another Earth-targeting maneuver on September 12 if tracking data indicate it is necessary — OSIRIS-REx will begin its approach to Bennu in August of 2018, using its array of small rocket thrusters to perform a series of braking maneuvers, slowing the craft down by 0.53 kilometers per second. This will allow a relative approach velocity of about 20 cm/s, setting up a preliminary survey of Bennu in October of that year. At that point, the spacecraft will be essentially flying in formation with the asteroid. 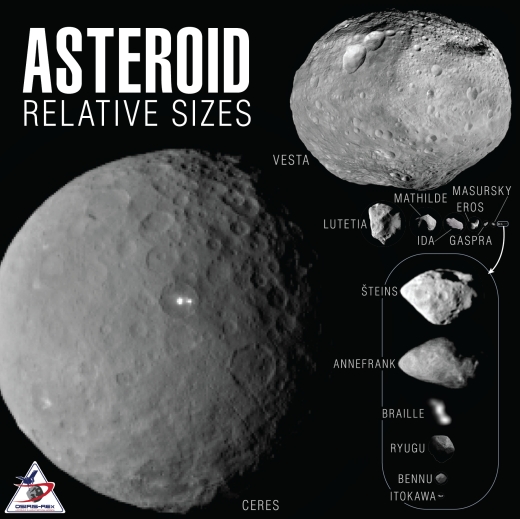 Image: Putting things into scale, this is a look at where the near-Earth asteroid Bennu fits in the asteroid catalog, a small object indeed toward the bottom of the chart. Credit: NASA/OSIRIS-REx team.

The survey of Bennu that begins after arrival in the fall of 2018 will last for a year, and will include four major phases:

That first item above is interesting. When working with asteroids, we have to take into account the Yarkovsky effect, which acts on rotating bodies in space and can be a significant influence on the the behavior of small asteroids. Daily heating of a rotating body in space can cause slow changes, producing a net force that causes a retrograde rotator like Bennu to gradually spiral inward toward the Sun. The effect has to be taken into account when calculating the object’s long-term trajectory, vital information for an Earth-crossing asteroid like this.

The OSIRIS-REx sample collection maneuver is to occur in July of 2020, when the craft makes a touch-and-go at a velocity of approximately 10 cm/s. Here the craft’s touch-and-go sample acquisition mechanism (TAGSAM) will be deployed, contacting the surface of Bennu for five seconds while releasing a burst of nitrogen gas that forces loose material into a collector. Up to three sampling attempts can be made, with a goal of 60 grams up to 2 kilograms of sample.

If all goes well, OSIRIS-REx will return its sample to Earth in September of 2023, jettisoning its sample return capsule (SRC) before performing a deflection maneuver to put the main craft into a stable orbit around the Sun. A soft landing in the Utah desert on September 24, 2023 is what mission planners are hoping for, and the chance for laboratory study of the asteroid’s chemical composition, including a search for organic compounds like amino acids and sugars.

Learning about Bennu’s physical properties will be helpful as we try to understand the distribution of molecular precursors to the origins of life on Earth. But it doesn’t hurt that we will also be learning a great deal about an object that itself has a faint chance of impacting the Earth late in the 22nd Century. A thorough knowledge of how it is made will help us understand how, if we ever have to do it, we will be able to adjust the trajectory of objects like these.

There is a useful mission overview and graphic timeline on the OSIRIS-REx site, which is likewise a good place to monitor mission developments. The mission’s Twitter account is @OSIRIS-REx.