We’ve learned a great deal about comet 67P Churyumov-Gerasimenko thanks to the European Space Agency’s Rosetta mission. What stands out to me is the fact that 40 percent of the comet, in terms of mass, is made up of organic compounds — combinations of hydrogen, carbon, oxygen and nitrogen. These ‘building blocks’ of life on Earth are readily available and could have been delivered over and over again through our planet’s long impact history.

But where did the organic compounds themselves come from? Jean-Loup Bertaux (CNRS / UPMC / Université de Versailles Saint-Quentin-en-Yvelines), working with Rosine Lallement (Observatoire de Paris / CNRS / Université Paris Diderot), has put forth the idea that the organics formed in interstellar space long before the formation of the Solar System.

The idea no longer seems as startling as it once might have, thanks to our continuing study of what are called diffuse interstellar bands, or DIBs. Revealed by spectroscopic studies, these are absorptions at specific wavelengths that turn up in the spectra of various astronomical objects, caused by the absorption of light in the interstellar medium. DIBs began to be recorded in the early 1900s, with over 100 of them being identified from the ultraviolet through the near infrared. 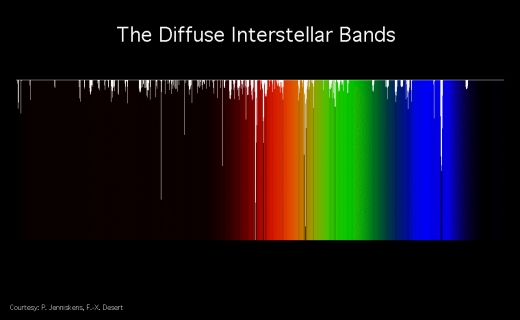 Diffuse interstellar bands appear to show organic material, found in most cases in roughly the same proportions wherever they are observed. In dense clouds of matter like those that will spawn stars, however, DIB absorption drops.

The mechanism? Bertaux and Lallement believe the organic molecules that produce DIBs clump together in such dense environments, and the clumped matter absorbs less radiation than the free-floating matter. “The decrease of DIB during line–of-sight crossings of the dense cores of interstellar clouds,” the authors write, “and the simultaneous steepening of the Far UV part of the reddening curve suggest that DIB carriers coagulate and are constituent of the very small grains eventually preserved in comets.”

In other words, organic molecules from the interstellar medium would have been conserved as the early nebula around growing young stars like the Sun coalesced, and would gradually have been incorporated into cometary nuclei, as comets like 67P/CG formed through the gradual accretion of grains of growing size. The authors also note that the ratio of organics could be increased by other organic molecules in the interstellar medium that do not show up in DIBs. 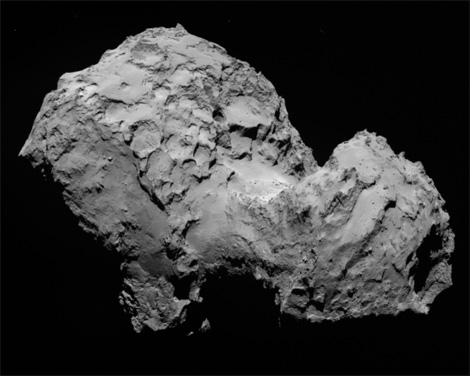 We’re dealing with pristine material, for the organics would have remained in the comets ever since their formation 4.6 billion years ago. The prospect for future missions is that we should be able to fetch a sample of these materials that could help us understand their true identity. If they are interstellar in origin, then the same materials should have been delivered to many systems. Thus the dust of comet 67P Churyumov-Gerasimenko gives us clues to an interstellar absorption feature that could mark the spread of organic compounds throughout the galaxy.

Next post: Creating Our Own Final Frontier: Forbidden Planet