On the Merger of Neutron Stars

I had thought to go straight back into current news after Centauri Dreams’ recent hiatus, but that’s never a fully satisfactory solution, especially when major events happen while I’m away. I don’t want to simply repeat what everyone has already read about the gravitational wave event GW170817, but there are a few things that caught my eye that we can discuss this morning. After all, we’re dealing with a new phenomenon — kilonovae — that has been predicted but never observed. Nor have we ever before tied gravitational wave events to visible light.

Now we’re seeing the combination of gravitational wave and electromagnetic astronomy in what promises to be a fertile new ground of study. The fifth GW event ever observed, GW170817 was detected on August 17 of this year by the Laser Interferometer Gravitational-Wave Observatory (LIGO) in the US, working with the Virgo Interferometer in Italy. In less than two seconds, the Fermi Gamma-ray Space Telescope and ESA’s INTErnational Gamma Ray Astrophysics Laboratory (INTEGRAL) detected a gamma ray burst from the same area of sky.

The collaborative nature of the observations that ensued is quite an achievement. What our gravitational wave detectors can give us is a broad window on the sky within which the event can be confined, one that contains millions of stars and is localized to an area of about 35 square degrees. Telescopes searching for the source included ESO’s Visible and Infrared Survey Telescope for Astronomy (VISTA) and VLT Survey Telescope (VST) at the Paranal Observatory, the Italian Rapid Eye Mount (REM) telescope at ESO’s La Silla Observatory, the LCO 0.4-meter telescope at Las Cumbres Observatory, and the American DECam at Cerro Tololo Inter-American Observatory. Pan-STARRS and Subaru in Hawaii quickly joined in.

I won’t keep listing them here, but about 70 observatories around the world went to work on GW170817, with the Swope 1-meter instrument in Chile announcing a new point of light close to the lenticular galaxy NGC 4993 in Hydra, quickly verified by VISTA observations in the infrared. Distance estimates agreed with the 130 million light year distance of NGC 4993, so what we have is the closest gravitational wave event yet detected and a relatively close gamma-ray burst. Image: A map of the approximately 70 light-based observatories that detected the gravitational-wave event called GW170817. On August 17, the LIGO and Virgo detectors spotted gravitational waves from two colliding neutron stars. Light-based telescopes around the globe observed the aftermath of the collision in the hours, days, and weeks following. They helped pinpoint the location of the neutron stars and identified signs of heavy elements, such as gold, in the collision’s ejected material. Credit: LIGO-Virgo.

This is the first time I have encountered the term ‘kilonova,’ though the idea behind it is decades old. The properties of this event track theoretical predictions that have been used to explain short gamma-ray bursts, events a thousand times brighter than a typical nova. The simultaneous detection of gravitational waves and gamma rays from this source provides powerful evidence. The merger of two neutron stars, thought to be the cause of the event, has produced a burst of heavy elements moving outbound as fast as .20 c.

Each neutron star in the binary that merged weighed between 1 and 2 solar masses, making the detection of their merger tricky because they are so much smaller than the black holes events we have previously observed. Thus Eliot Quataert (UC-Berkeley):

“We were anticipating LIGO finding a neutron star merger in the coming years but to see it so nearby – for astronomers – and so bright in normal light has exceeded all of our wildest expectations. And, even more amazingly, it turns out that most of our predictions of what neutron star mergers would look like as seen by normal telescopes were right!”

Thus we expand our understanding of how heavy elements are created, a process that can happen in stellar cores through fusion up to iron. Just how elements beyond iron are produced has always been a major issue in astrophysics, but neutron star mergers offer a solution. It was evidently Quataert, working with Brian Metzger (Columbia University) and Daniel Kasen (UC-Berkeley) who applied the term ‘kilonova’ to such events in a 2010 paper (see this UC-Berkeley news release). Kasen refers to neutron star merger debris as ‘weird stuff — a mixture of precious metals and radioactive waste.’

And Columbia postdoc Jennifer Barnes, who had worked with Kasen at Berkeley, helped nail down what a kilonova should look like:

“When we calculated the opacities of the elements formed in a neutron star merger, we found a lot of variation. The lighter elements were optically similar to elements found in supernovae, but the heavier atoms were more than a hundred times more opaque than what we’re used to seeing in astrophysical explosions,” said Barnes. “If heavy elements are present in the debris from the merger, their high opacity should give kilonovae a reddish hue.”

Image: A team of UC Santa Cruz astronomers led by former UC Berkeley graduate student Ryan Foley was the first to detect the light from the neutron star merger 11 hours after the gravitational waves from the collision reached Earth. The left image shows that the glow (red arrow) was not there four months earlier. Credit: UC-SC, Swopes Telescope and Hubble.

The observations fit the calculations, with the color of the merger event shading from an earlier blue to the reddish signature showing the heavier elements of the inner debris cloud. 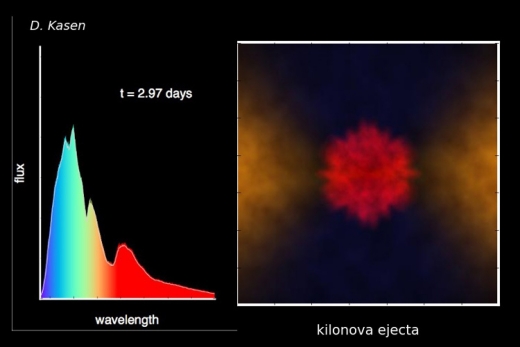 Image: Three days after the merger and explosion, the bright blue glow from lighter elements in the outer polar regions is beginning to fade, giving way to the red glow from the heavier elements in the surrounding doughnut and spherical core. The red glow persisted for more than two weeks. Credit: Dan Kasen.

About 6 percent of a solar mass of heavy elements came out of all this, a yield of gold alone that was more than 200 Earth masses, and a platinum yield of nearly 500 Earth masses. Neutron star mergers, it appears, can account for all the gold in the visible universe. So much for the idea that what we can now call ‘ordinary’ supernovae can account for the heavy elements beyond iron. Clearly, neutron star mergers are a key player. Gravitational wave astronomy is already paying off.

Those wanting to dig into the papers on GW170817 can start with Kasen et al., “Origin of the heavy elements in binary neutron-star mergers from a gravitational-wave event,” Nature 16 October 2017 (abstract), as well as Arcavi et al., “Optical emission from a kilonova following a gravitational-wave-detected neutron-star merger,” Nature 16 October 2017 (abstract) and work from there. The UC-Berkeley news release cited above contains links to a variety of key sources.

Next post: A Deep Data Dive for Gravitational Lenses