We seem to be entering ‘new eras’ faster than I can track. Certainly the gravitational wave event GW170817 demonstrates how exciting the prospects for this new kind of astronomy are, with its discovery of a neutron star merger producing a heavy-metal seeding ‘kilonova.’ But remember, too, how early we are in the exoplanet hunt. The first exoplanets ever detected were found as recently as 1992 around the pulsar PSR B1257+12. Discoveries mushroom. We’ve gone from a few odd planets around a single pulsar to thousands of exoplanets in a mere 25 years.

We’re seeing changes that propel discovery at an extraordinarily fast pace. Look throughout the spectrum of ideas and you can also see that we’re applying artificial intelligence to huge datasets, mining not only recent but decades-old information for new insights. Today’s problem isn’t so much data acquisition as it is data storage, retrieval and analysis. For the data are there in vast numbers, soon to be augmented by huge new telescopes and space missions that will take our analysis of planetary atmospheres down from gas giants to Earth-size worlds.

Consider what a team of European astronomers has come up with by way of gravitational lensing. Working at universities in Groningen, Naples and Bonn, the scientists have deployed artificial intelligence algorithms similar to those that have been used in the marketplace by the likes of Google, Facebook and Tesla. Feeding a neural network with astronomical data, the team was able to spot 56 new gravitational lens candidates. All of this in a field of study that normally demands sorting thousands of images and putting human volunteers to work. 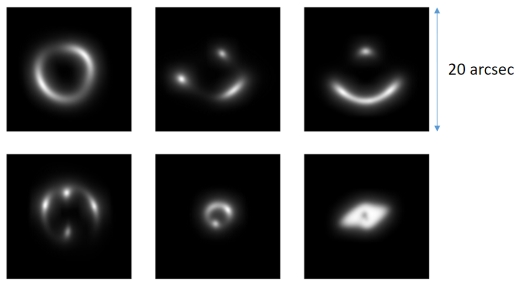 Image: With the help of artificial intelligence, astronomers discovered 56 new gravity lens candidates. This picture shows a sample of the handmade photos of gravitational lenses that the astronomers used to train their neural network. Credit and copyright: Enrico Petrillo (Rijksuniversiteit Groningen).

The team’s astronomical data were drawn from the optical Kilo Degree Survey (KiDS). Working the data is a ‘convolutional neural network’ of the kind Google’s AlphaGo used to beat Lee Sedol, the world’s best Go player. Carlo Enrico Petrillo (University of Groningen, The Netherlands) and team first fed the network millions of training images of gravitational lenses, a project that displayed the lensing properties the researchers wanted to identify.

The images from the Kilo Degree Survey cover about half of one percent of the sky. Matching the new imagery with its training images, the neural network found 761 lens candidates, which subsequent analysis by the astronomers whittled down to 56. These are all considered lensing candidates in need of confirmation by telescopes. The network rediscovered two known lenses but missed a third known lens considered too small for its training sample.

For Carlo Enrico Petrillo, the implications are clear:

“This is the first time a convolutional neural network has been used to find peculiar objects in an astronomical survey. I think it will become the norm since future astronomical surveys will produce an enormous quantity of data which will be necessary to inspect. We don’t have enough astronomers to cope with this.”

Exactly so. We’re accumulating data faster than we can analyze our material, which is why artificial intelligence advances are so telling. Training the network to recognize smaller lenses and to reject false ones is next on the team’s agenda. In the context of improving AI, bear in mind the recent major upgrade of Google’s AlphaGo to AlphaGo Zero, which defeated regular AlphaGo 100 games to 0. The new version trained itself from scratch in three days.

Image: With the help of artificial intelligence, astronomers discovered 56 new gravity lens candidates. In this picture are three of those candidates. Credit and Copyright: Carlo Enrico Petrillo (University of Groningen).