Another of those ‘new eras’ I talked about in yesterday’s post is involved in the latest news on gravitational waves. Let’s not forget that it was 50 years ago — on November 28, 1967 — that Jocelyn Bell Burnell and Antony Hewish observed the first pulsar, now known to be a neutron star. It made the news at the time because the pulses, separated by 1.33 seconds, raised a SETI possibility, leading to the playful designation LGM-1 (‘little green men’) for the discovery.

We’ve learned a lot about pulsars emitting beams at various wavelengths since then and the SETI connection is gone, but before I leave the past, it’s also worth recognizing that our old friend Fritz Zwicky, working with Walter Baade, first proposed the existence of neutron stars in 1934. The scientists believed that a dense star made of neutrons could result from a supernova explosion, and here we might think of the Crab pulsar at the center of the Crab Nebula, an object whose description fits the pioneering work of Zwicky and Baade, and also tracks the work of Franco Pacini, who posited that a rotating neutron star in a magnetic field would emit radiation. Likewise a pioneer, Pacini suggested this before pulsars had been discovered. 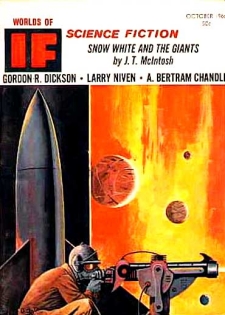 Writing about all this takes me back to reading Larry Niven’s story ‘Neutron Star,’ available in the collection by the same name, when it first ran in a 1966 issue of IF. Those were interesting days for IF, but I better cut that further digression off at the source — more about the magazine in a future post. ‘Neutron Star’ is the story where Beowulf Shaeffer, a familiar character in Larry’s Known Space stories, first appears. If you want to see a neutron star up close and learn what its tidal forces can do, you can’t beat Niven’s tale.

Typically, a neutron star will get up to two solar masses while showing a diameter of a mere 20 kilometers, telling us it’s made of a kind of dense matter about which we have much to learn. Scientists at the Max Planck Institutes for Gravitational Physics and for Radio Astronomy have been looking at two major tools for studying the intense gravity associated with neutron stars: Pulsar timing and gravitational wave observations like the recent GW170817 event.

What’s interesting here is that neutron stars can help us investigate theories of gravity in which the gravitational fields associated with their interactions may differ from what General Relativity predicts. Lijing Shao, lead author of the paper coming out of this work, notes that alternate theories of gravity will produce different predictions on the behavior of binary neutron star systems. The paper gives us a glimpse of the kind of analyses gravitational wave astronomy will enable.

“The gravitational acceleration at a neutron star’s surface is about 2×1011 times that of the Earth which makes them excellent objects to study Einstein’s general relativity and alternative theories in the strong-field regime. In a systematic investigation with pulsar timing technologies, we were able to put constraints on a class of alternative gravity theories showing for the first time in detail how they depend on the physics of the extremely dense matter they contain.”

All this emerges as the “equation of state” of neutron stars. Equations of state relate pressure, volume and temperature in a particular substance that is in thermodynamic equilibrium. Shao and colleagues have been studying possible equations of state for five binary pulsar systems, each of which contains a neutron star and a white dwarf. They believe that gravitational wave detectors will soon become sensitive enough to investigate alternate gravitational theories. 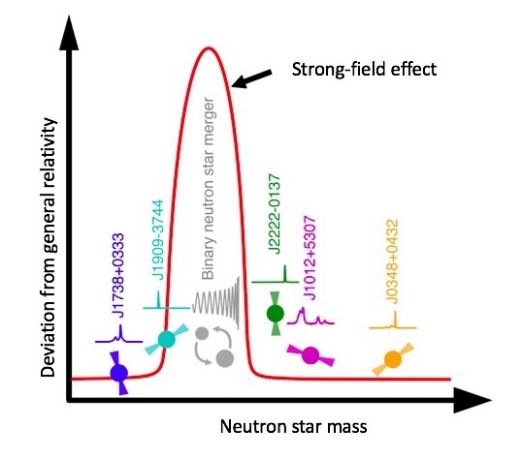 Co-author Alessandra Buonanno, who is also director of the Astrophysical and Cosmological Relativity division at the Institute in Potsdam, puts the matter this way:

“The LIGO-Virgo detectors may soon discover binary neutron star systems with suitable masses that could improve the constraints set by binary-pulsar tests for certain equations of state and thus put Einstein’s general relativity and alternative theories to a qualitatively new test.”

Thus we’re pushing into the early days of gravitational wave astronomy by looking at conditions in ultra-strong gravitational fields, with an eye toward yet another way of probing General Relativity. Improving the analyses already made through pulsar timing alone, gravitational waves will help us probe deeper, especially as we begin to get better mass measurements for known pulsars, where in many cases the uncertainties are large. As the paper notes: