An Origin for a Far Traveling Asteroid

I used to think the Kuiper Belt object Quaoar was hard to pronounce (“Kwawar”), and even muffed it despite having plenty of time to practice before the recent Tennessee Valley Interstellar Workshop. Pontus Brandt (JHU/APL) had mentioned Quaoar in his talk in Huntsville as a target that lined up in useful ways with a proposed interstellar precursor mission he was presenting, one designed to examine dust distribution from within the system by looking back at our heliosphere at distances up to 1000 AU, seeing it as we see other stars’ dust environments.

So I summarized Brandt’s ideas in my wrap-up talk and couldn’t get Quaoar pronounced properly without multiple tries. But even Quaoar pales into the realm of everyday lingo when compared to 1I/’Oumuamua. Please tell me how to do this. The word is a Hawaiian term for ‘scout,’ and the Ulukau: Hawaiian Electronic Library’s online dictionary tells me it’s pronounced this way: ō’u-mu’-a-mu’-ă. I could work with that and maybe get it right in a talk, with extra practice. At least until I look at it — all those vowels defeat me.

The object originally tagged A/2017 U1, then, is now tagged as interstellar in the combined 1I/’Oumuamua, the 1 indicating it is the first such object to be observed, the I indicating interstellar. It is fitting that 1I/’Oumuamua was the name chosen by the Pan-STARRS team in Hawaii that first brought this object to our attention. Image: The trajectory of 1I/ ‘Oumuamua, which made its closest approach to Earth on October 14, coming within 24,000,000 km, or about 60 times the distance to the moon. Credit: NASA/JPL-Caltech.

According to Stern, Jupiter, Saturn, Uranus, and Neptune combined probably ejected 1013 to 1014 objects larger than 1 km early in our solar system’s history, when it was still cluttered with debris left over from the planet-formation process. Multiply that by the 1011 stars in the Milky Way, and one comes up with numbers like 1024 to 1025 objects larger than a kilometer. Smaller objects like 1I/‘Oumuamua must be orders of magnitude more plentiful.

We’ve just seen, in the work of members of the Initiative for Interstellar Studies, how reaching such an object might be attempted. Now the question becomes, where did it come from? On that score, we have quick work indeed from Eric Gaidos (University of Hawaii at Manoa), working with Jonathan Williams at the same institution and Adam Kraus (University of Texas at Austin). The trio believes it has traced 1I/‘Oumuamua’s origins and presents its case in a paper submitted to Research Notes of the American Astronomical Society.

Gaidos and team traced the path of 1I/’Oumuamua backwards along its route and took into account the numerous variables along the way in so extended a journey. The likelihood, the researchers believe, is that the object originated in a nearby young stellar cluster. They point to the Carina and Columba Associations, the word ‘association’ referring to stellar associations, which are loosely bound star clusters whose stars share a common origin. They still move together through space but are at this point gravitationally unbound. The estimated distances to the Carina and Columba Associations range from 50 to 85 parsecs (163 to 277 light years); the age of stars within these groups is on the order of 45 million years. An object ejected at 1-2 kilometers per second soon after star formation would thus have had time to reach the Sun.

We suggest that A/2017 U1 formed in a protoplanetary disk in the Carina/Columba associations and was ejected by a planet ≈40 Myr ago. The absence of ice indicates an origin inside the “ice line” of the disk plus an ejection velocity of 1-2 km sec−1 (assuming the cluster was already unbound), constrain the mass mP and semi-major axis aP of the planet.

What kind of planet could have ejected this object? The paper examines the issue both for solar mass stars as well as M-dwarfs:

Permitted values (grey zone) center around a 20-30M⊕ planet forming by a few Myr within a few AU, reminiscent of the core accretion scenario for giant planet formation. In contrast, a “super-Earth” at ∼1 AU could eject ice-free planetesimals from a lower-mass M dwarf. 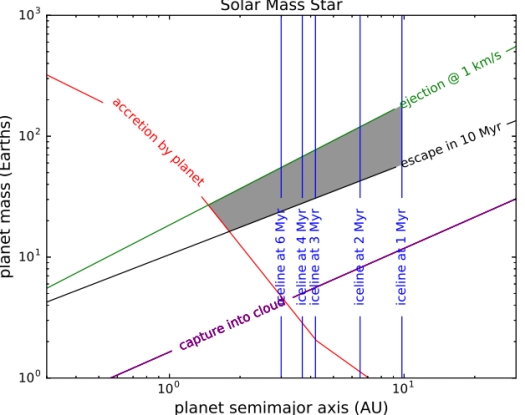 As the paper notes, future interstellar interlopers may well have radiants similar to 1I/’Oumuamua. Practicing our skills on this celestial wanderer may thus tune us up for another.

The paper is Gaidos, Williams and Kraus, “Origin of Interstellar Object A/2017 U1 in a Nearby Young Stellar Association?” submitted to Research Notes of the American Astronomical Society (abstract). Our interstellar wanderer seems to be spawning a growth industry in these early days following its detection. See also Zwart et al., “The origin of interstellar asteroidal objects like 1I/2017 U1,” submitted to Monthly Notices of the Royal Astronomical Society (preprint). I haven’t read this one yet and thus won’t comment.

Previous post: Project Lyra: Sending a Spacecraft to 1I/’Oumuamua (formerly A/2017 U1), the Interstellar Asteroid