It being the day after the Thanksgiving holiday here in the States, I hadn’t planned a post, but a few more things have cropped up about ‘Oumuamua that I can quickly tuck in here. Now that I’ve learned how to pronounce it (oh MOO-uh MOO-uh), it doesn’t seem nearly as intimidating — it’s the lineup of vowels that trips up the unwary. On the other hand, Jim Benford suggested on Wednesday that we avoid the vowels altogether and call this thing ‘the Shard.’

Here’s the photo Jim sent of the Shard, a 95-story London skyscraper sometimes called The Shard of Glass. It’s 309.7 metres high, the tallest building in the United Kingdom, featuring 11,000 panes of glass with a total surface area of 56,000 square metres. What draws Jim’s attention is the 6 to 1 aspect ratio, with ‘Oumuamua’s thought to be 10 to 1. Jim might also have referenced London’s BT Tower (8 to 1), but what the Guinness Book of World Records calls the “most slender tower” turns out to be the i360 observation tower in Brighton, at a whopping 41 to 1. 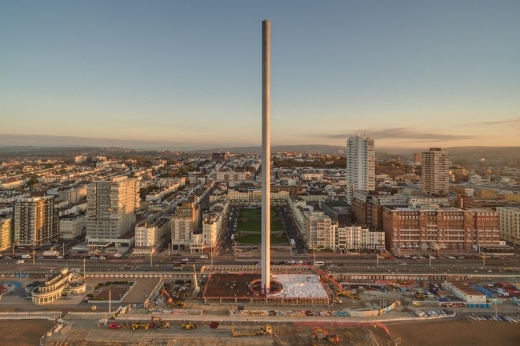 With ‘Oumuamua, though, we now have to ask whether the 10 to 1 ratio is actually correct, as Jason Wright noted in a recent post. The problem here is that, unlike the situation with Boyajian’s Star, we have a small dataset to work with, and according to Wright (Penn State), researchers are getting different aspect ratios, ranging all the way from the aforementioned 10 to 1 down to a relatively ordinary 3 to 1.

If the latter is the case, the interstellar object may look something more like Haumea than the Shard. “I’ll need to see a lot more data and hard, critical analysis of the anomalies in ‘Oumuamua before I get interested in the SETI angle at the level I am for Tabby’s Star,” adds Wright.

Greg Laughlin (UC-Santa Cruz) also weighed in on ‘Oumuamua with a new paper (citation below) and accompanying article in Scientific American. Laughlin dubs our visitor “exhilaratingly bizarre” and goes on to describe its unusual arrival, in which, despite accruing 20 kilowatts of energy per square meter at perihelion, it showed no evidence of cometary activity. It was fun to see that Greg also refers to ‘Oumuamua at one point as “a crazily elongated shard.”

But what drew my attention in Greg’s post was how difficult the ejection of debris from a newly forming planetary system seems to be. Getting such a shard free from the host star demands a gravitational assist from a massive planet located at a large distance from the star — terrestrial worlds in our Solar System would fall far short, though the gas giants could manage the feat.

If objects like ‘Oumuamua are common and if they are made predominantly of ice, as we would expect in an outer stellar system, then it implies, says Laughlin, that almost every star in the Milky Way hosts a Neptune-class planet at roughly the distance of our own Neptune from the Sun.

And if it really is rock or metal? Then we deal with another scenario entirely:

…in the highly unlikely event ‘Oumuamua is indeed a refractory slab of rock or metal, as suggested by its complete lack of coma, then its appearance is extremely hard to understand. Only a few percent of stars host planets that are capable of ejecting volatile-free debris from warm regions deep within a gravitational well. They flat-out can’t generate the vast overall swarm implied by ‘Oumuamua’s recent passage, suggesting that another visit by a similar object won’t happen for a very long time.

A long time indeed. According to Laughlin’s calculations of that scenario, ‘Oumuamua could travel for 10 quadrillion years before coming into similar proximity to another star.

At that far distant time, the galaxy will be a very different place, in which all the stars that now shine warmly down on planets will be expired white dwarfs, warmed a few degrees above absolute zero by the flicker of proton decay.

The paper is Laughlin, G. & Batygin, K. (2017) “On the Consequences of the Detection of an Interstellar Asteroid,” submitted to Research Notes of the AAS (abstract).