Research into Boyajian’s Star, otherwise known as KIC 8462852 or ‘Tabby’s Star,’ has continued in robust fashion even as many of us were distracted by that other curiosity with a faint SETI potential, the interstellar asteroid `Oumuamua. In both cases, a highly interesting object provoked speculation as to its origins, with Boyajian’s Star getting the lion’s share of attention because the unusual dips in its lightcurve proved hard to explain.

Now a team of more than 200 researchers led by Tabetha Boyajian herself is drawing useful conclusions about the star. Also on the team is Penn State’s Jason Wright, whose interest in possible SETI signatures led him to point out that engineering on a vast scale could not immediately be ruled out. The paper now being made available in The Astrophysical Journal Letters shows that the star dims more at some wavelengths than at others.

And that is, to say the least, problematic for the idea that an artificial megastructure orbits Boyajian’s Star. The paper, titled “The First Post-Kepler Brightness Dips of KIC 8462852,” draws on data collected by Boyajian (Louisiana State) and colleagues as a result of a Kickstarter campaign in which some 1700 contributors donated money to observations through the Las Cumbres Observatory, a network of robotic telescopes with northern hemisphere sites in the Canary Islands and Hawaii. Follow-up data were acquired from a number of other instruments.

The observations ran from March 2016 to December 2017, with four main 1–2.5% dips, beginning in May of 2017 and named “Elsie,” “Celeste,” “Skara Brae,” and “Angkor,” persisting on timescales from several days to weeks. What analysis of these dips shows is not consistent with any solid structure around the F3-class Star. As Wright explains on his PSU site:

Eva Bodman has done a lot of work to characterize how much deeper the dips are at blue wavelengths than red ones. If there were opaque objects blocking our view of the light, the star should get equally dim at all wavelengths. Instead, Eva finds that the blue (B) dips are much deeper—about twice as deep—as they are when we look at infrared wavelengths (i’ band, just beyond human vision).

This is consistent with ordinary astrophysical dust, and a major conclusion of our paper: the dips are not caused by opaque macroscopic objects (like megastructures or planets or stars) but by clouds of very small particles of dust (less than 1 micron in typical size). We can also say that these clouds are mostly transparent (“optically thin” in astrophysics parlance). 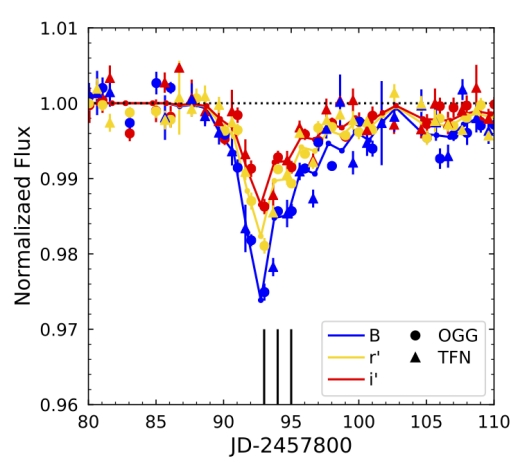 This work marks the first real-time detection of a dip in brightness for this unusual star, and as the paper notes, “Triggered spectroscopic and polarmetric observations taken during the dips reveal no large, obvious changes compared to out of dip observations.”

The paper goes on to say:

Invoking dust still challenges our creativity in developing a unified theory to explain all the observations; however, the models of Wyatt et al. (2017) give hope to a swarm of yet unspecified objects in an eccentric orbit (in this case, exocomets, with an alternative being dust-enshrouded planetesimals as proposed by Neslušan & Budaj 2017) causing the brightness fluctuations. Continued monitoring to detect events in the future will help narrow down any periodicity within the dip occurrence, which would strengthen the argument that the source of the obscuring material was in orbit around the star, as opposed to density fluctuations in the ISM, etc.

It would have been exciting, to say the least, to find evidence for an artificial cause of Boyajian’s Star’s peculiarities, but I find this work exhilarating in its own right. What we have here is a highly publicized, privately funded investigation into an enigmatic phenomenon that now seems to be closer to a solution. That extraterrestrial engineering is not involved doesn’t diminish the power of the process, in which scientists examined an observational anomaly from all angles and counted an ETI hypothesis among the possibilities.

Bear in mind that using through the Kepler data on Boyajian’s Star alone would not have been sufficient because ground-based follow-up observations were not contemporaneous. That made the ability to summon up a crowd-funded campaign to observe with various instruments at differing sensitivities, resolutions and wavelengths an essential component in this result.

A friend asked not long after the Boyajian’s Star story broke whether I would be disappointed if it turned out to have a ‘boring natural cause.’ But that’s just it. I don’t find natural causes boring, especially when they push us to the limit to explain them. We still have a mystery here, because the original comet hypothesis — or the idea that some kind of circumstellar material is responsible — gains new life at the same time that regular dimming of the star itself — through mechanisms not yet understood — cannot be ruled out. Getting a handle on unusual astrophysical phenomena has a deep allure as we continue to learn about the cosmos.

Where next, then, with Boyajian’s Star? The paper concludes:

We emphasize the importance that continued monitoring will bring to our understanding of the physical processes responsible for the light curve features. In general, precise, long-term photometric monitoring to detect future dips is a level-zero requirement. These data also provide the means of informing planned triggered observations such as high-resolution spectroscopy to study the events in more detail. Furthermore, extended photometric monitoring will enable us to characterize the star’s long-term variability (Schaefer 2016; Montet & Simon 2016; Meng et al. 2017; Simon et al. 2017), which is thought to be linked to the dips in some way. All-in-all, the apparent low duty cycle of the dips, unclear predictions on when they will recur, and fairly unconstrained multiyear timescales of the long-term variability will require a committed, intensive monitoring program spanning the next decade and beyond.

Previous post: The Plasma Magnet Drive: A Simple, Cheap Drive for the Solar System and Beyond