3200 Phaethon: Arecibo Back at Work

With the holidays behind us (alas), I want to be sure to cover the Arecibo observations of asteroid 3200 Phaethon, not only for their intrinsic interest but as a nod to the restoration of operations at the Puerto Rico observatory. We are fortunate indeed that the structural damage Arecibo suffered on September 20 because of hurricane Maria was relatively minor. Radio astronomy work was back in progress within days of the storm, though it took until early December before commercial power was restored and radar work could resume.

If you’re interested in radar astronomy, have a look at Alessondra Springmann’s How Radar Really Works: The Steps Involved Before Getting an Image, which is available via The Planetary Society. Springmann offers a detailed overview of radar operations with a splash of humor:

Arecibo Observatory is known for its 305-meter (1000-foot) diameter telescope and its appearances in Goldeneye and Contact. Aside from battling Bond villains and driving red diesel Jeeps around the telescope (grousing at the site director about the funding status of projects is optional), several hundred hours a year of telescope time at Arecibo go toward radar studies of asteroids. A group of four planetary radar astronomers at Arecibo (as well as collaborators and colleagues at institutions outside of Puerto Rico) is tasked with “finding them before they find us” by NASA’s Near-Earth Object Observation program. We study the orbits and surface properties of our rowdy neighbors, near-Earth asteroids.

‘Finding them before they find us’ indeed. Arecibo contains the most powerful radar system on the planet, making it a key asset for planetary defense, a great part of which is keeping an eye on asteroids close enough to be problematic. This is a facility we need to keep in action as we continue to build the catalog of near-Earth asteroids and examine their properties. The recently released observations of 3200 Phaethon were conducted from December 15 to 19, 2017. 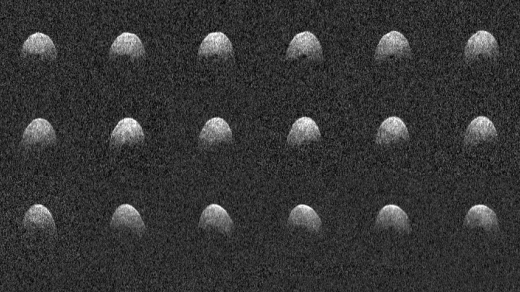 Image: These radar images of near-Earth asteroid 3200 Phaethon were generated by astronomers at the National Science Foundation’s Arecibo Observatory on Dec. 17, 2017. Observations of Phaethon were conducted at Arecibo from Dec.15 through 19, 2017. At time of closest approach on Dec. 16 at 3 p.m. PST (6 p.m. EST, 11 p.m. UTC) the asteroid was about 10.3 million kilometers away, or about 27 times the distance from Earth to the moon. The encounter is the closest the object will come to Earth until 2093. Credit: Arecibo Observatory/NASA/NSF.

About Phaethon itself, we know that it is about 6 kilometers in diameter, larger than previously thought, and is the second largest near-Earth asteroid in the category classified as ‘potentially hazardous.’ Size and close approach are determinants of which asteroid fits into that category, but work on any passing asteroid is useful because radar can study its size, shape, rotation, and surface features, while adding to our knowledge of its trajectory. Joan Schmelz, Arecibo’s deputy director, calls the facility “crucial for planetary defense work,” and that it is.

The images of 3200 Phaethon are the best we’ve yet taken, showing a spheroidal object with a large concave depression near its equator and a dark circular feature near one of its poles. The resolution in these images is about 75 meters per pixel.

“These new observations of Phaethon show it may be similar in shape to asteroid Bennu, the target of NASA’s OSIRIS-REx spacecraft, but more than 1,000 Bennus could fit inside of Phaethon,” said Patrick Taylor, a Universities Space Research Association (USRA), Columbia, Maryland, scientist and group leader for Planetary Radar at Arecibo Observatory. “The dark feature could be a crater or some other topographic depression that did not reflect the radar beam back to Earth.”

This asteroid is, by the way, the first to be discovered through images taken from a spacecraft, the craft in question being the Infrared Astronomical Satellite (IRAS), which produced data that Simon Green (Open University) and John K. Davies (then at Leicester University) examined to find the object. It is the parent body of the Geminids meteor shower and, given over thirty years of observations, is an asteroid with a well determined orbit, one well constrained for the next 400 years. The closest approach to Earth in 2017 was known with an accuracy of ±40 kilometers.