Tightening the Focus on Brown Dwarfs

Among the many indicators that we have much to learn about brown dwarfs is the fact that we don’t yet know how frequently they form. Recent work from Koraljka Muzic (University of Lisbon) and colleagues has pointed, however, to quite a robust galactic population (see How Many Brown Dwarfs in the Milky Way?). Working with observations at the Very Large Telescope, the study pegged the brown dwarf population at 25 billion, with a potential of as many as 100 billion. 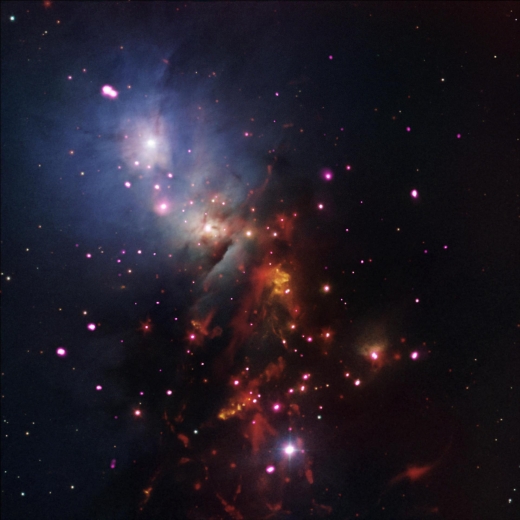 Image: Stellar cluster NGC 1333 is home to a large number of brown dwarfs. Astronomers will use Webb’s powerful infrared instruments to learn more about these dim cousins to the cluster’s bright newborn stars. Credit: NASA/CXC/JPL.

Likewise in need of further data is our understanding of how brown dwarfs form, especially in the region where planet and star overlap. Recall that brown dwarfs are not main sequence stars, as they are not massive enough to ignite hydrogen fusion, even if deuterium and lithium fusion may occur. If we get down to brown dwarfs less than 13 times the mass of Jupiter, are we dealing with planets or stars? And do these objects form as planets (within a circumstellar disk) or as stars (via the collapse of interstellar gas)?

Aleks Scholz (University of St Andrews, UK) will be using the James Webb Space Telescope (assuming successful launch and deployment next year, fingers crossed) to study the cluster in the image above, NGC 1333 in Perseus. A number of brown dwarfs have been located within the cloud, which is itself considered to be a stellar birthing ground for young stars. Usefully, NGC 1333 also appears to contain brown dwarfs at the very low end of the mass distribution.

“In more than a decade of searching, our team has found it is very difficult to locate brown dwarfs that are less than five Jupiter-masses – the mass where star and planet formation overlap. That is a job for the Webb telescope,” Scholz says. “It has been a long wait for Webb, but we are very excited to get an opportunity to break new ground and potentially discover an entirely new type of planets, unbound, roaming the Galaxy like stars.”

Note the the Substellar Objects in Nearby Young Clusters (SONYC) project, which Scholz leads. The goal is to study the frequency and properties of brown dwarfs in star-forming regions (Koraljka Muzic is part of this collaboration, which also includes Toronto’s Ray Jayawardhana). Below is an image showing brown dwarfs in NGC 1333 as identified by the survey. 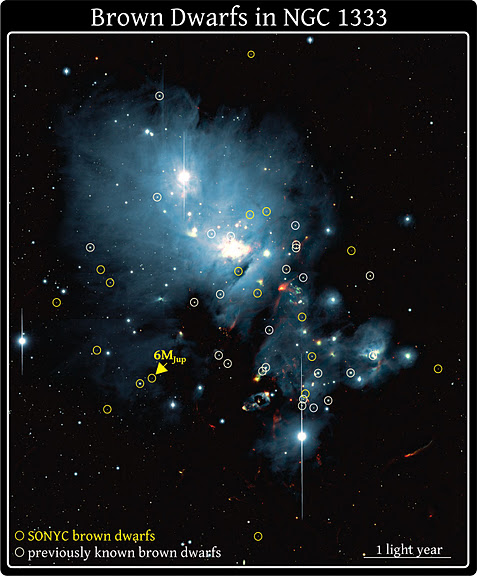 Likewise planning to use JWST to address brown dwarf issues is Étienne Artigau (Université de Montréal), who will be looking at an interesting low-mass brown dwarf called SIMP0136. We’ve looked previously at the work Jonathan Gagné (Carnegie Institution for Science) has performed on this one, a brown dwarf whose variability in brightness has been attributed to weather patterns moving into view during its short (2.4 hour) rotation period. Gagné’s team, studying SIMP0136’s membership in a nearby moving group, has pegged its mass at 12.7 Jupiter masses. See Exploring the Planet/Brown Dwarf Boundary for more.

This is an interesting object on a number of counts, not the least of which is the fact that it is a bit less than 20 light years out, making it one of the 100 nearest systems to the Sun. Also noteworthy is the fact that it is a free-floating object not associated with any star, a low-mass brown dwarf on the planet/brown dwarf boundary that in many ways resembles a gas giant. The Webb instrument should be just the ticket for pushing our understanding further.

“Very accurate spectroscopic measurements are challenging to obtain from the ground in the infrared due to variable absorption in our own atmosphere, hence the need for space-based infrared observation. Also, Webb allows us to probe features, such as water absorption, that are inaccessible from the ground at this level of precision,” Artigau explains.

Let’s place SIMP0136 into context, then, as we look toward the next generation of space-based exoplanet work. We know that a potent tool for atmospheric analysis will be transmission spectroscopy, conducted as a planet moves in front of its star as seen from Earth. In SIMP0136, we have an object with gas giant characteristics unhampered by proximity to a star. Artigau goes on to point out in this NASA news item that we can use it to better understand cloud decks in brown dwarf and planet atmospheres as we contrast the two kinds of observation.

One day we’ll have a better idea of how many unbound planetary-mass objects are out there. That they are hard to discover goes without saying, and we’ve only located a few on the brown dwarf/planet boundary. But it’s clear that the attention now being devoted to them through efforts like the Substellar Objects in Nearby Young Clusters project as well as the BANYAN All-Sky Survey-Ultracool (BASS-Ultracool) will, with the aid of space-based instruments, tell us much more. The resource list on the BASS-Ultracool page offers abundant references.