Fast Radio Bursts (FRBs) continue to intrigue us given their energy levels. You may recall FRB 121102, which was revealed at a press conference almost exactly one year ago to be located in a radio galaxy some 3 billion light years away. This is a repeating FRB (the only repeating source yet found), making its study an imperative as we try to characterize the phenomenon.

With data from Arecibo, the Very Large Array and the European VLBI network, astronomers determined its position to within a fraction of an arcsecond, where a source of weak radio emission is also traced. Today, drawing on new observations from Arecibo and the Green Bank instrument in West Virginia, we learn something about the source of these bursts.

The energies we are talking about are obviously titanic. Given the distance between the source and us, researchers have calculated that each burst throws as much energy in a single millisecond as our Sun releases in an entire day. And as we learn in the latest issue of Nature, an international team has been able to show that the bursts from FRB 121102 are highly polarized, allowing insights into the environment from which it sprang. The analysis was revealed at a meeting of the American Astronomical Society in Washington, D.C.

In play here is a phenomenon known as Faraday rotation, which is the ‘twisting’ that happens to polarized radio waves as they pass through a magnetic field. And what stands out in these findings is the apparent strength of the magnetic field involved, for the Faraday rotation is extreme, among the largest ever measured in a radio source. The implication: The bursts are evidently moving through an exceedingly powerful magnetic field in a dense plasma. 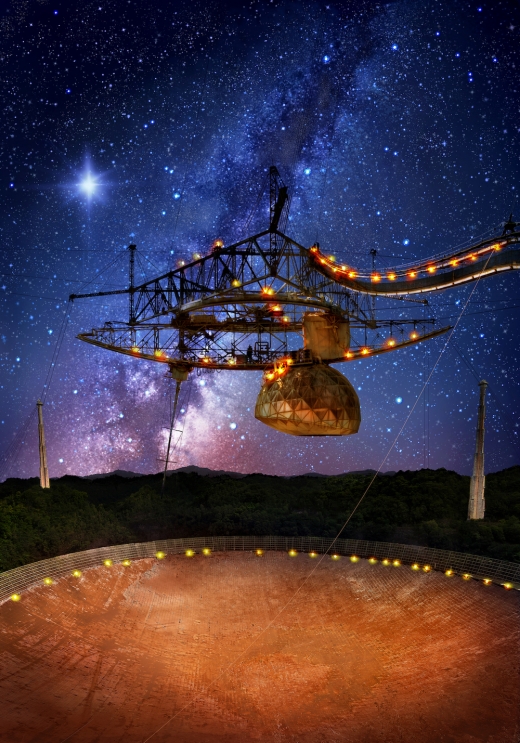 We now move into the realm of speculation. Is FRB 121102 situated close to a massive black hole at the center of its host galaxy? That would correspond to some degree with the magnetized plasmas that have been observed in the Milky Way, associated with its own supermassive black hole. But there are other possibilities, as Arecibo staff astronomer Andrew Seymour comments, referring to the FRB observations at higher radio frequencies than before:

“We developed a new observing setup at the Arecibo Observatory to do this, and our colleagues from Breakthrough Listen at the Green Bank Telescope confirmed the results with observations at even higher radio frequencies. What’s more, the polarization properties and shapes of these bursts are similar to radio emission from young, energetic neutron stars in our galaxy. This provides support to the models that the radio bursts are produced by a neutron star.”

But given that it is the only repeating FRB, is FRB 121102 somehow different from all other, non-repeating FRBs? Bursts from the former have been observed with as many as seven peaks, a more complicated structure in time and radio frequency than observed in other FRBs, which show one or occasionally two peaks in time.

“We’ve observed bursts from FRB121102 with as many as seven peaks, and the bursts peak in radio frequency as well as time,” says Laura Spitler, an astronomer at the Max-Planck-Institut für Radioastronomie, Bonn. “We are now trying to understand whether the bursts’ structure is an intrinsic feature of the process that generates the radio emission or the result of the propagation through the dense plasma local to the source.” 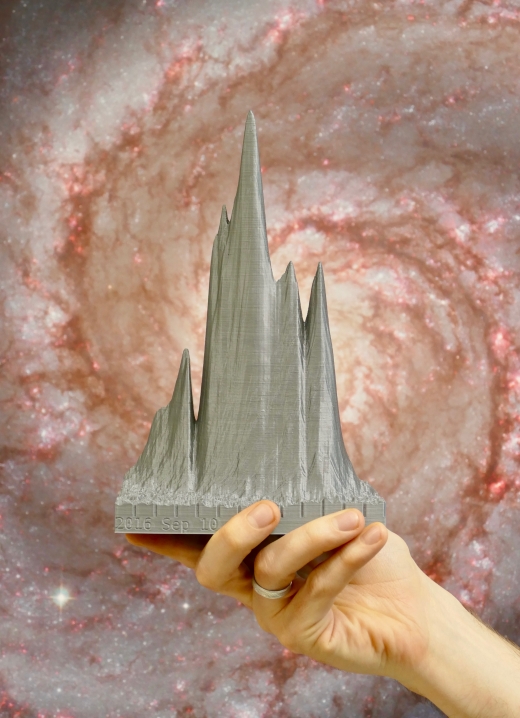 Image: One of FRB121102’s radio bursts, as detected with the Arecibo telescope. This 3D print shows how bright the burst is as a function of observed radio frequency and time. Credit: Anne Archibald (University of Amsterdam).

We may get some help in the next phase of the investigation from CHIME (Canadian Hydrogen Intensity Mapping Experiment), an interferometric radio telescope under construction in British Columbia, which should be coming online later this year. The researchers believe the instrument will be well-tuned for the detection of FRBs and for studying their degrees of polarization. McGill University’s Shriharsh Tendulkar believes CHIME will be capable of detecting “…between a few and a few dozen FRBs every day.”

Also in the cards is future observation at Green Bank, where Breakthrough Listen has allotted more time to study not just the emissions of FRB 121102, but also other FRB sources. The plan is to observe at higher frequencies, up to 12 GHz — the current Green Bank work has taken place from 4-8 GHz. Whether or not the energy of FRB 121102 drops off at higher frequency may provide additional insights into its source.