Organic Molecules in the Magellanics

If for some reason I had to come up with a different name for Centauri Dreams, I think it might just be Magellanic Dreams. I say this because, like the Alpha Centauri stars themselves, the Magellanics have been something of an obsession since my childhood. Dwarf galaxies orbiting the Milky Way, the Large and Small Magellanic Clouds took my imagination outside our galaxy to a place where it could be viewed in all its splendor (or maybe not: See The Milky Way from Outside for why galaxy viewing can be problematic). 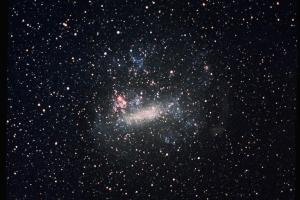 The Large Magellanic Cloud is 160,000 light years away (contrast this with M-31’s 2.5 million light years), while the SMC is about 200,000 light years out. Science fiction brought us Olaf Stapledon’s telepathic aliens living in the LMC — these guys were made to order for the emerging field of Dysonian SETI in that they did engineering on a planetary scale (see Star Maker for more). And remember where the spacecraft in Arthur C. Clarke’s Rendezvous with Rama was heading at the end? It appeared to have used its solar assist to set course for the LMC.

Image: The Large Magellanic Cloud and Supernova 1987A taken by the Kuiper Airborne Observatory (NASA 714) during its New Zealand deployment in 1987. Credit: NASA.

There are too many science fiction references to the Large and Small Magellanics to get into today, from Heinlein’s Have Space Suit Will Travel to Iain Banks’ The Player of Games. I’m now trying to curb my SF enthusiasm (but do read Silverberg’s Collision Course some time to get the backward view of the Milky Way from the LMC). Because what triggered all these thoughts is new work out of the National Radio Astronomy Observatory on the subject of unusual findings in the Large Magellanic Cloud.

Here we’re dealing with data from the Atacama Large Millimeter/submillimeter Array (ALMA). Astronomer Marta Sewiło (NASA GSFC) and colleagues have found clear evidence of complex organic molecules in the Large Magellanic Cloud, including methanol, dimethyl ether, and methyl formate. The finding raises the eyebrows just a bit because the LMC is nowhere near as rich in heavy elements like carbon, nitrogen and oxygen as our Milky Way — in astronomical terms, these dwarf galaxies exhibit low metallicity. While methanol has been studied in the LMC before, the dimethyl ether and methyl formate are new findings. 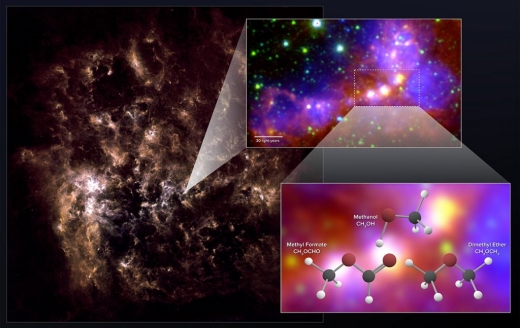 Image: Astronomers using ALMA have uncovered chemical “fingerprints” of methanol, dimethyl ether, and methyl formate in the Large Magellanic Cloud. The latter two molecules are the largest organic molecules ever conclusively detected outside the Milky Way. The far-infrared image on the left shows the full galaxy. The zoom-in image shows the star-forming region observed by ALMA. It is a combination of mid-infrared data from Spitzer and visible (H-alpha) data from the Blanco 4-meter telescope. Credit: NRAO/AUI/NSF; ALMA (ESO/NAOJ/NRAO); Herschel/ESA; NASA/JPL-Caltech; NOAO.

Focusing on two star-forming ‘embryos’ in the LMC (also known as ‘hot cores’), the astronomers think they’re gaining insights into the formation of complex organic molecules in the early universe. That’s because dwarf galaxies with relatively low masses produce a slower rate of star formation, so the LMC may well be chemically similar to distant, younger galaxies. Seeding a galaxy with heavy elements takes generations of star formation and evolution. Says Sewiło:

“Even though the Large Magellanic Cloud is one of our nearest galactic companions, we expect it should share some uncanny chemical similarity with distant, young galaxies from the early universe… Young, primordial galaxies simply didn’t have enough time to become so chemically enriched. Dwarf galaxies like the LMC probably retained this same youthful makeup because of their relatively low masses, which severely throttles back the pace of star formation.”

The LMC’s N113 Star Formation Region is massive and rich in gas, with a large number of protostars that throw a bright infrared signature. Several of these young stellar objects have produced the spectral evidence for dimethyl ether and methyl formate. The latter two have never been detected at such a distance from Earth, while methanol, a relatively simple compound, is significant because it is essential for the formation of the more complex organic molecules.

Tying these findings to implications for the early universe, the researchers note that the presence of complex organic molecules — molecules containing six or more atoms including carbon — around protostars indicates they would likely be incorporated in emerging protoplanetary disks. Indeed, such molecules may well have been delivered to the young Earth by comets and meteorites. And if chemically primitive regions like the LMC can produce them, then we have the possibility that life could have taken hold early in the history of the cosmos, as these are the building blocks of molecules that are essential to its emergence.