Lupus 3: Into the Dust

An absorption nebula, or ‘dark’ nebula, is a dense cloud of interstellar dust that can block the visible light from objects within or behind it. Today’s image shows a striking cloud in the star-forming region Lupus 3, a dazzling view that simply demanded placement on Centauri Dreams. If you’re looking for an interstellar flight angle, think about the issue of shielding a relativistic starship in regions so dense with gas and dust, zones that can stretch for hundreds of light years. But I need no other angle here — the image is majestic in and of itself. 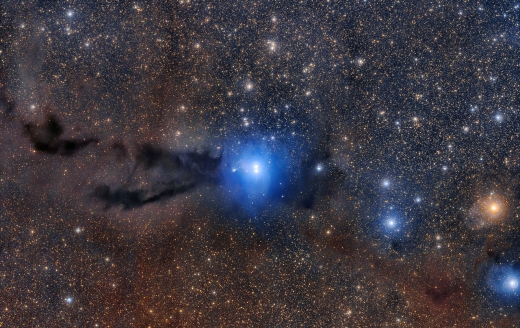 Image: A dark cloud of cosmic dust snakes across this spectacular wide field image, illuminated by the brilliant light of new stars. This dense cloud is a star-forming region called Lupus 3, where dazzlingly hot stars are born from collapsing masses of gas and dust. This image was created from images taken using the VLT Survey Telescope and the MPG/ESO 2.2-metre telescope and is the most detailed image taken so far of this region. Credit: ESO/R. Colombari.

Lupus 3 is found in Scorpius, about 600 light years from Earth, part of the larger complex called the Lupus Clouds. The cold dust absorbs and scatters light as it passes through the cloud, making objects within them viewable only in radio or infrared wavelengths. Frozen carbon monoxide and nitrogen are primary components blocking visible light, but molecular hydrogen, helium and a variety of more transparent ingredients are found within. Some of these absorption nebulae are familiar, great black swathes against background stars, like the Coalsack Nebula.

Lupus 3 is rich in T Tauri stars, variables that are pre-main-sequence stars in the process of contracting. These are young objects that have not yet begun hydrogen fusion at the core but are still powered by gravitational energy as their contraction takes them toward the main sequence. Note the two bright stars in the center of the above image. Growing hotter and brighter, their radiation and stellar winds would have swept out nearby gas and dust, allowing their emergence at visible wavelengths. Our Sun may have formed in a region much like this. 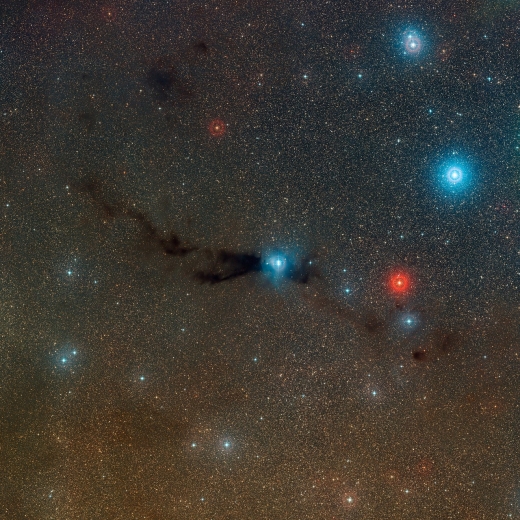 Image: This wide-field view shows Lupus 3, where new stars are forming along with clusters of brilliant stars that have already burst out of their dusty stellar nursery. It is likely that the Sun formed in a similar star formation region more than four billion years ago. This view was created from images forming part of the Digitized Sky Survey 2. Credit: ESO/Digitized Sky Survey 2. Acknowledgement: Davide De Martin.

Let’s get back to interstellar flight issues for a moment. So much depends on where we are traveling when we think about dust mitigation. When the Daedalus designers worked on the first full specifications for a starship back in the 1970s, they included a payload shield some 32-meters in radius. Future starships moving at a high fraction of c would obviously do well to avoid dense nebulae, but we also have to think about shielding fast flyby probes as they enter destination systems, where gas and dust levels can reach dangerous levels.

The Daedalus beryllium shield was one option, and Gregory Matloff has suggested that a forward-firing laser could also be deployed to deflect larger particles along the route. The issue could be significant: Dana Andrews (Andrews Space) has calculated that for a starship moving at 0.3 c, a tenth of a micron grain of typical carbonaceous dust would have a relative kinetic energy of 37,500,000 GeV. We have much to learn about the true size distribution of dust particles in the nearby interstellar medium before embarking on interstellar missions, which is Bruce Draine, author of the definitive Physics of the Interstellar and Intergalactic Medium, is serving as a consultant with the Breakthrough Starshot effort.