It was in 1775 that Pierre-Simon Laplace developed his theories of tidal dynamics, formulating in the following year a set of equations to explain the phenomenon at a greater level of detail than ever before. Looking at the Moon on a frosty winter night, it’s pleasing to realize that there is a mountainous region at the end of Montes Jura in Mare Imbrium that is called Promontorium Laplace. Surely the French astronomer and mathematician would have been pleased.

One result of Laplace’s calculations was his pointing out that the Moon’s equatorial bulge was far too large to be accounted for by its current rate of rotation. Here we’re dealing with conditions of formation of an object thought to have been the result of a collision between the Earth and a Mars-sized planet early in our system’s evolution. I seldom write about the Moon in these pages, but today’s story on its development catches my eye because it relates to the early history of our own world and the Solar System itself. For Chuan Qin (now at Harvard University) and colleagues have modeled how quickly the hot young Moon receded from the Earth.

The current rate of the Moon’s recession from the Earth is about 4 centimeters per year. But what was the recession rate in the earliest periods of its formation? 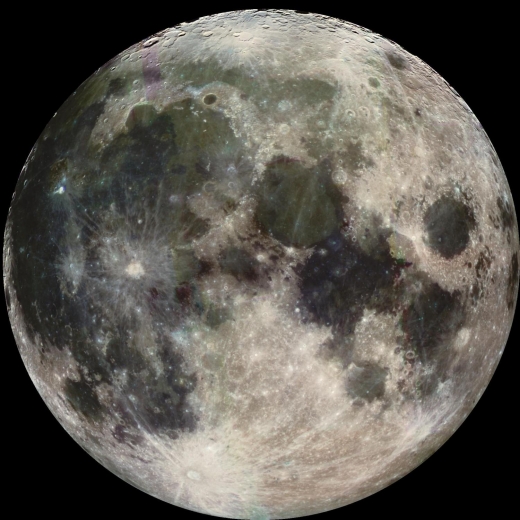 The tidal bulge at the equator evidently has much to tell us. A hot, fast-rotating early Moon would have possessed a much larger equatorial bulge than today’s. As the Moon moved farther from the Earth and its rotation slowed, the bulge would have shrunk until, cooled and hardened, a permanent ‘fossil’ bulge remained in its crust. Working with a model adjusting the relative timing of lithosphere thickening and lunar orbit recession, Qin and team have found that the pace of the lunar recession was slow, lasting for several hundred million years in an era roughly four billion years ago.

If this dynamic modeling is correct, it can tell us something about the early Earth, says Shijie Zhong (University of Colorado at Boulder), a co-author on the paper:

“The moon’s fossil bulge may contain secrets of Earth’s early evolution that were not recorded anywhere else. Our model captures two time-dependent processes and this is the first time that anyone has been able to put timescale constraints on early lunar recession.”

The new model has implications for the hydrosphere, the combined mass of water on the early Earth. The researchers argue that the Moon’s equatorial bulge is evidence that Earth’s energy dissipation in response to tidal forces would have been greatly reduced in this period. That’s assuming that a hydrosphere even existed in the Hadean, a geologic eon that began with the planet’s formation some 4.6 billion years ago and ended roughly 4 billion years ago. From the paper:

Viable solutions indicate that lunar bulge formation was a geologically slow process lasting several hundred million years, that the process was complete about 4 Ga when the Moon-Earth distance was less than ~32 Earth radii, and that the Earth in Hadean was significantly less dissipative to lunar tides than during the last 4 Gyr, possibly implying a frozen hydrosphere due to the fainter young Sun.

The paper makes the case that Earth’s hydrosphere may have been frozen during the time of the Moon’s formation, making for little tidal dissipation. One possibility emerging from that is a faint young Sun radiating about 30 percent less energy than today. A ‘snowball Earth’ in the Hadean could have been the result, but we have no direct evidence in the geological record for this. Qin and team intend to continue work on their model as they dig deeper into the Moon’s evolution in a period ending with the Late Heavy Bombardment some 3.8 billion years ago.

The paper is Qin et al., “Formation of the Lunar Fossil Bulges and Its Implication for the Early Earth and Moon,” Geophysical Research Letters 2 February 2018 (abstract).