“Wherever you go, there you are.” So goes an old saw that makes a valid point: You can’t escape yourself by changing locations. Translating the great Greek poet C. P. Cavafy, Lawrence Durrell tweaked the language of “The God Abandons Antony” to come up with these closing lines:

Ah! don’t you see
Just as you’ve ruined your life in this
One plot of ground you’ve ruined its worth
Everywhere now — over the whole earth?

All this in the service of Durrell’s Alexandria Quartet, noting the fact that not even a Roman autocrat could escape his fate. Bear with me — I think about stuff like this when I’m out walking late at night and the stars are particularly stunning. Before my walk, I had been looking at images of M31, the Andromeda galaxy, and doing my usual “What would it be like to be there” routine. Minus Durrell/Cavafy’s dark vision, I might still ask myself what had changed. From a vantage in the Andromeda galaxy, there would be a Milky Way in my sky. And what else?

Then David Herne dropped me a note, providing a link to new research from Australia’s International Centre for Radio Astronomy Research dealing with this very galaxy. The work described therein raised the question anew: Just how alike are Andromeda and the Milky Way? For some previous estimates have held that M31 was actually two to three times the size of our galaxy, while others have found a rough parity, with Harvard’s Mark Reid and colleagues arguing in 2009 that our galaxy is about as massive as Andromeda, with a mass of up to 3 trillion Suns. 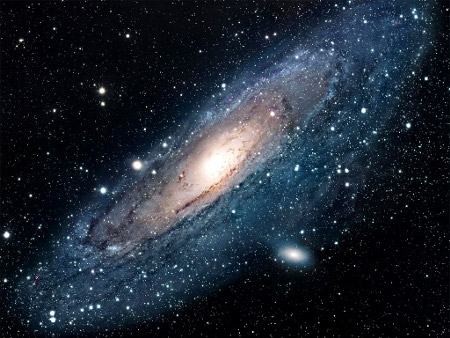 Image: The Andromeda Galaxy, perhaps a twin of our own. We can see Andromeda from without, but determining the structure of the galaxy we move through ourselves is a continuing challenge. Credit: NASA.

I described Reid’s work in 2009 (see How Many Stars in the Galaxy), and I mention it here because when we’re discussing these matters, it’s necessary to add a caveat. We have to ask ourselves, what exactly does a mass of 1 to 3 trillion stars actually mean? Much has happened since 2009, but I wrote this back then:

Does that mean that the Milky Way contains three trillion stars? Absolutely not. I’m seeing the three trillion star number popping up all over the Internet, and almost reported it that way here when I first encountered the work. The misunderstanding comes from making mistaken assumptions about galactic mass. Reid used the Very Long Baseline Array to examine regions of intense star formation across the galaxy, a study the scientist reported at the American Astronomical Society’s winter meeting this past January [2009]. The Milky Way does indeed turn out to have much more mass than earlier studies had indicated.

But a heavier than expected Milky Way means — according to much current thinking — a larger amount of dark matter. Reid and team had found that the Milky Way was rotating 15% faster than previously assumed, matching the rotation rate of M31 and implying similar overall mass and size. But only a fraction of this would be normal matter, so that a mass of three trillion Suns would still translate to, say, five hundred billion actual stars, and they would be spread over all stellar classes. In any case, the 3 trillion figure is now in doubt.

Back to the ICRAR work. In 2014, Prajwal Kafle (University of Western Australia) revised back downward the mass of the Milky Way, studying the kinematics of halo stars to determine the underlying distribution of mass, revealing about half as much dark matter as had been previously thought. Now Kafle and colleagues have gone to work on Andromeda, reaching the conclusion that the galaxy is about 800 billion times heavier than the Sun. Our nearest galactic neighbor thus turns out to be roughly the same mass as the Milky Way.

As in their earlier study, Kafle’s group looked at the orbits of high-velocity stars as a way of gauging galactic escape velocity, a technique developed by British astronomer James Jeans in 1915. For the Milky Way, this value is thought to be in the neighborhood of 550 kilometers per second, a figure Kafle and team confirmed in 2014. The new paper’s data mean that the value for Andromeda is not dissimilar. Like the Milky Way, M31 turns out to have much less dark matter than previously thought, perhaps only a third of earlier high-end estimates.

If this is the case, then we can start to re-think the remote future, when the two giant spiral galaxies (over two million light years apart) begin to approach each other. Indeed, galactic interactions within the local group — 54 galaxies, most of them dwarfs — are affected by these changes, given that the gravitational center is located between the Milky Way and Andromeda. The two galaxies are now shown to be evenly matched in terms of size. Adds Kafle:

“It completely transforms our understanding of the local group. We had thought there was one biggest galaxy and our own Milky Way was slightly smaller but that scenario has now completely changed.”

We have five billion years to wait before the merger of our two galaxies, which happens to be the same timescale that takes in the growth of our Sun to red giant stage. What will the Solar System become as the Sun swells and the galaxies begin their close encounter? Kafle’s simulations of the event are spectacular, as you can see below.

The paper is Kafle et al., “The Need for Speed: Escape velocity and dynamical mass measurements of the Andromeda galaxy,” Monthly Notices of the Royal Astronomical Society February 15th, 2018 (abstract). Kafle’s 2014 paper on the Milky Way’s mass is “On the Shoulders of Giants: Properties of the Stellar Halo and the Milky Way Mass Distribution,” Astrophysical Journal 794, No. 1 (24 September 2014). Abstract.