A New Theory of Lunar Formation

Simon Lock and Sarah Stewart are intent upon revising our views on how the Moon was formed. Lock is a Harvard graduate student who last year, in company with Stewart (UC-Davis) presented interesting work on what the duo are calling a ‘synestia,’ which is the kind of ‘structure’ resulting from the collision of huge objects. Current thinking about the Moon is that it formed following the collision of a Mars-sized object with the Earth, two huge objects indeed.

What Lock and Stewart asked is whether this formation scenario can produce the result we see today. What it calls for is the ejection of material that forms into a disk and, through processes of accretion, gradually becomes the Moon. The problem with it, says Lock, is that it’s a very hard trick to pull off:

Perhaps we’ve misunderstood the original, massive collision. An adjusted formation scenario could explain why some volatile elements like potassium, sodium and copper are less abundant on the Moon than the Earth, and why isotope ratios for the Earth and the Moon are nearly identical. The ‘synestia’ hypothesis works like this: We still begin with an impact, but the assumed disk of raw materials never forms. Instead, the angular momentum of both colliding bodies is added together, creating a vast, indented disk much bigger than either object.

I’m going to drop back to an earlier Lock and Stewart paper for an illustration here.

Image: The structure of a planet, a planet with a disk and a synestia, all of the same mass. Credit: Simon Lock and Sarah Stewart.

The 2018 paper describes a synestia as:

…an impact-generated structure with Earth-mass and composition that exceeds the corotation limit (CoRoL). Synestias are formed by a range of high-energy, high-AM [angular momentum] collisions during the giant impact stage of planet formation (Lock and Stewart, 2017, hereafter LS17). A synestia is a distinct dynamical structure compared to a planet with a condensate-dominated circumplanetary disk, and, as a result, different processes dominate the early evolution of a synestia.

So the synestia we get from major collisions — and these should be frequent in young planetary systems — is a rapidly rotating, partially vaporized object, molten or gaseous material expanding in volume, an object in the shape of a squashed doughnut without any solid surface. The synestia cannot rotate like a solid body because of variations in rotational rate and thermal energy, so we get an inner region rotating one way and an outer region moving at orbital speeds. Perhaps 10 percent of the Earth’s rock is vaporized, while the rest becomes liquid.

When Lock and Stewart set up simulations of cooling synestias and examine them with dynamic, thermodynamic and geochemical calculations, they find that a ‘seed’ forms within the synestia, a gathering of liquid rock that forms off-center and grows as the structure cools, with vaporized rock condensing and falling toward the center of the synestia. As some of this material strikes the ‘seed’ that will become the Moon, it begins to grow. The Moon eventually emerges from the vapor of the synestia as condensation continues and the synestia recedes within the lunar orbit, with the remainder of the spinning debris coalescing into the Earth.

Most high-energy, high-AM giant impacts can produce synestias. The formation of the Moon within a terrestrial synestia can potentially reproduce the lunar bulk composition, the isotopic similarity between Earth and the Moon, and the large mass of the Moon. If the post-impact body also had high obliquity, the same giant impact may trigger a tidal evolution sequence that explains the present day lunar inclination and the AM of the Earth-Moon system… 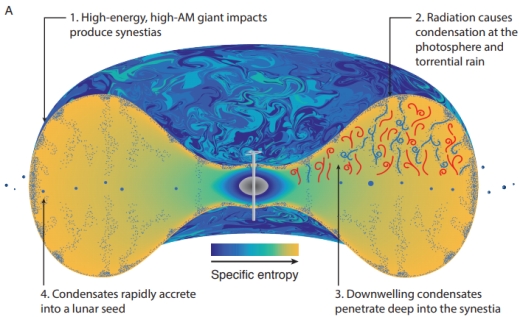 The next image, likewise part of Figure 18 in the paper, shows the emergence of the Moon within the synestia as the latter contracts. Credit: Lock & Stewart. 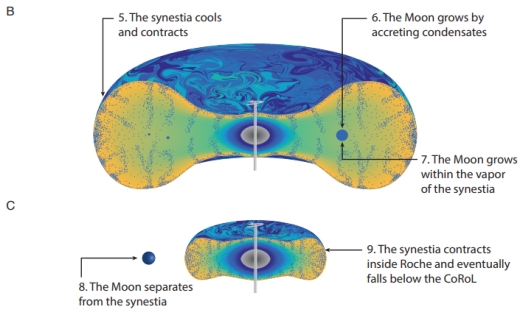 The impact scenario for lunar formation thus shifts to a study of the properties of the synestia that produced the Moon. The similarity in isotopes between the Earth and the Moon is an issue because simulations of giant impacts under the older model produce a lunar disk made primarily of material from the impacting body. But isotope ratios vary among the planets. We would expect differences within these ratios if the Moon formed largely from the impactor’s materials.

Under the synestia model, Earth and Moon emerge from the same cloud of vaporized rock, explaining the isotopic similarity. In this scenario, a planetary satellite forms inside the planet it will orbit. Lock and Stewart explain the Moon’s lack of volatile elements by the same formation story, with the forming Moon surrounded by high-temperature material from the synestia. The paper adds:

This is a complicated model, but Stewart points out in this Harvard news release that it replicates features of the Moon’s composition that are otherwise hard to explain. Further exploration of synestias will be useful as we model what happens in early exoplanet systems, where collisions on a similar colossal scale should be a feature of planet formation.

The paper is Lock et al., “The Origin of the Moon within a Terrestrial Synestia,” Journal of Geographysical Research: Planets 28 February 2018 (abstract / preprint). The 2017 paper is Lock & Stewart, “The structure of terrestrial bodies: Impact heating, corotation limits, and synestias,” Journal of Geophysical Research: Planets 122 (2017). Abstract / preprint.