Antimatter will never lose its allure when we’re talking about interstellar propulsion, even if the breakthroughs needed to harness it are legion. After all, a kilogram of antimatter, annihilating itself in contact with normal matter, yields roughly ten billion times the amount of energy released when a kilogram of TNT explodes. Per kilogram of fuel, we’re talking about 1,000 times more energy than nuclear fission, and 100 times the energy available through nuclear fusion.

Or we could put this into terms more suited for space. A single gram of antimatter, according to Frank Close’s book Antimatter (Oxford, 2010), could through its annihilation produce as much energy as the fuel from the tanks of two dozen Space Shuttles.

The catalog of energy comparisons could go on, each as marvelous as the last, but the reality is that antimatter is not only extremely difficult to produce in any quantity but even more challenging to store. Cram enough positrons or antiprotons into a magnetic bottle and the repulsive forces between them overcome the containing fields, creating a leak that in turn destroys the antimatter. How to store antimatter for propulsion remains a huge problem.

Here’s Close on the issue:

…`like charges repel’, so in order to contain the electric charge in a gram of pure antiprotons or of positrons, you would have to build a force field so powerful that were you to disrupt it, the explosive force as the charged particles flew apart would exceed anything that would have resulted from their annihilation.

As with so many issues regarding deep space, though, we tackle these things one step at a time. Thus recent news out of CERN draws my attention this morning. Bear in mind that between CERN and Fermilab we’re still talking about antimatter production levels that essentially have enough energy to light a single electric bulb for no more than a few minutes. But assuming we find ways to increase our production, perhaps through harvesting of naturally occurring antimatter, we’re learning some things about storage through a project called PUMA.

The acronym stands for ‘antiProton Unstable Matter Annihilation.’ The goal: To trap a record one billion antiprotons at CERN’s Extra Low ENergy Antiproton (ELENA) facility, a deceleration ring that works with CERN’s Antiproton Decelerator to slow antiprotons, reducing their energy by a factor of 50, from 5.3 MeV to just 0.1 MeV. ELENA should allow the number of antiprotons trapped to be increased by a factor of 10 to 100, a major increase in efficiency. 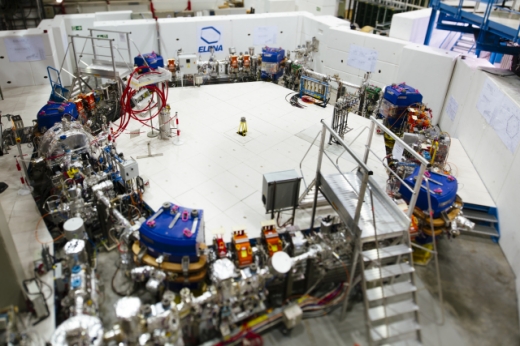 Image: The ELENA ring prior to the start of first beam in 2016. Credit: CERN.

The PUMA project aims to keep the antiprotons in storage for several weeks, allowing them to be loaded into a van and moved to a nearby ion-beam facility called ISOLDE (Isotope mass Separator On-Line), where they will be collided with radioactive ions as a way of examining exotic nuclear phenomena. The nature of the investigations is interesting — CERN has two experiments underway to study the effects of gravity on antimatter, for example — but it’s the issue of storage that draws my attention. How will CERN manage the feat?

This update from CERN lays out the essentials:

To trap the antiprotons for long enough for them to be transported and used at ISOLDE, PUMA plans to use a 70-cm-long “double-zone” trap inside a one-tonne superconducting solenoid magnet and keep it under an extremely high vacuum (10-17 mbar) and at cryogenic temperature (4 K). The so-called storage zone of the trap will confine the antiprotons, while the second zone will host collisions between the antiprotons and radioactive nuclei that are produced at ISOLDE but decay too rapidly to be transported and studied elsewhere.

Thus ELENA produces the antiprotons, while ISOLDE supplies the short-lived nuclei that CERN scientists intend to study, looking for new quantum phenomena that may emerge in the interactions between antiprotons and the nuclei. I’m taken with how Alexandre Obertelli (Darmstadt Technical University), who leads this work, describes it. “This project,” says the physicist, “might lead to the democratisation of the use of antimatter.” A striking concept, drawing on the fact that antimatter will be transported between two facilities.

Antiprotons traveling aboard a van to a separate site are welcome news. In today’s world, low-energy antiprotons are only being produced at CERN, but we’re improving our storage in ways that may make antimatter experimentation in other venues more practical. Bear in mind, too, that an experiment called BASE (Baryon Antibaryon Symmetry Experiment), also at CERN, has already proven that antiprotons can be kept in a storage reservoir for over a year. 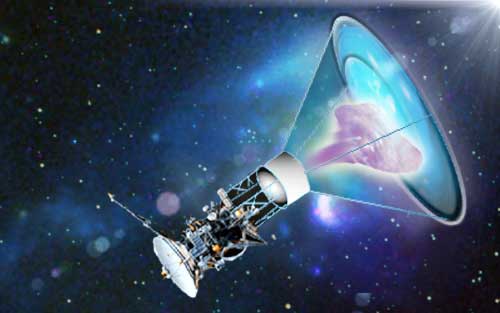 Image: A potential future use for trapped antimatter. Here, a cloud of anti-hydrogen drifts towards a uranium-infused sail. Credit: Hbar Technologies, LLC/Elizabeth Lagana.

We’re a long way from propulsion, here, but I always point to the work of Gerald Jackson and Steve Howe (Hbar Technologies), who attack the problem from the other end. With antimatter scarce, how can we find ways to use it as a spark plug rather than a fuel, an idea the duo have explored in work for NASA’s Institute for Advanced Concepts. Here, milligrams of antimatter are released from a spacecraft onto a uranium-enriched five-meter sail. For all its challenges, antimatter’s promise is such that innovative concepts like these will continue to evolve. Have a look at Antimatter and the Sail for one of a number of my discussions of this concept.