A Binary Origin for ‘Oumuamua?

The fleeting interstellar visitor we call ‘Oumuamua is back in the news, an object whose fascination burns bright given its status as a visitor from another star system. Just what kind of system is the subject of a new letter just published in Monthly Notices of the Royal Astronomical Society, in which Alan Jackson and colleagues argue that the star-crossed wanderer is most likely the offspring of a binary stellar system, these being far more likely to eject rocky objects. Our first confirmed interstellar asteroid just grows in interest.

Jackson (University of Toronto – Scarborough) is quoted in this news release from the Royal Astronomical Society as saying that the odds didn’t favor the first interstellar object detected in our system being an asteroid. Comets are more likely to be spotted, and our system is more efficient at ejecting comets than asteroids. But ‘Oumuamua is what we got, and its eccentricity of 1.2 and 30 km/sec speed pegged its orbit as hyperbolic, clearly not bound by the Sun’s gravity. 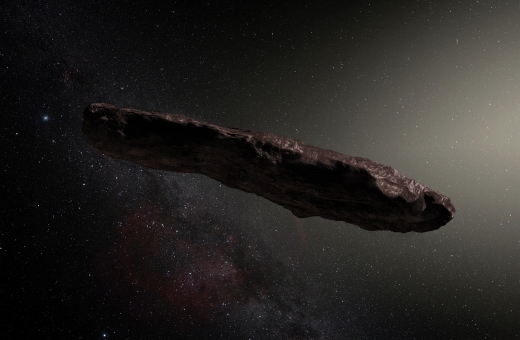 How much do we know about what our Solar System can eject? For this, I turn for a moment to Greg Laughlin and Konstantin Batygin, who make this case in “On the Consequences of the Detection of an Interstellar Asteroid” (citation below):

Our own solar system has contributed many volatile-rich planetesimals to the galaxy. Specifically, within the framework of the so-called Nice model of early solar system evolution, (Tsiganis et al. 2005; Levison et al. 2008), a transient period of dynamical instability is triggered in response to interactions between the giant planets and a primordial disk comprising ∼ 30M⊕. In numerical realizations, nearly all of this material is expelled into the interstellar medium as the instability unfolds, leaving behind today’s severely mass-depleted Kuiper belt. Given the universality of N -body evolution, one can speculate that similar sequences of events are a common feature of planetary system evolution.

Jackson and team are frank in acknowledging that with only a single interstellar object to work with, we have to assume huge uncertainties in the constraints we apply to the mass of material typically ejected from planetary systems. That point hardly needs belaboring, but we press on with the data we have to work with, keeping in mind how much play there is in our estimates.

The case for binary systems and ejected material runs like this. ‘Oumuamua shows no evident activity, making the case that it is a rocky object shorn of volatiles, and hence one that was ejected from inside its parent star’s snowline. For a star of solar mass to eject an object from within its snowline requires a companion object with a mass greater than Saturn. But our radial velocity surveys show a low occurrence rate of giant planets (~10 percent) with orbital periods of 100 to 400 days. Here the authors cite the Laughlin/Batygin paper above, which argues that ‘Oumuamua, if it is indeed rocky, implies that extrasolar asteroid belts are massive.

Giant planets inside the snowline are relatively uncommon, but binary systems are abundant, and are known to be efficient at ejecting material. The authors draw the following conclusion:

…we expect that at most 10% of Sun-like single stars will host a planet capable of efficiently ejecting material interior to the ice line. Laughlin & Batygin (2017) and Raymond et al. (2017) thus argue that if 1I/‘Oumuamua is indeed rocky, then typical extrasolar asteroid belts must be unusually massive. Similarly, recent results from micro-lensing surveys (e.g. Suzuki et al. 2016; Mroz et al. (2017) suggest that giant planets at larger separations are also not common….While giant planets are relatively uncommon, tight binary systems are abundant (Duchene & Kraus 2013), and are extremely efficient at ejecting material (Smullen et al. 2016). They may therefore represent a dominant source of interstellar small bodies.

Jackson and team conducted 2000 N-body simulations to study close encounters and ejections, finding that the fraction of rocky or devolatilised material ejected by binaries is 36 percent — the ratio of icy to rocky objects is roughly 2:1. Moreover, these simulations show that the population of icy interstellar material comes primarily from low mass stars, while the population of rocky material is dominated by intermediate mass stars.

The best guess for ‘Oumuamua: A hot, high mass binary system ejecting rocky material during the formation era of its planets. As to the ejection process itself, the paper comments:

Physically, our picture is one of planetesimals migrating inwards during the early phases of planet formation, in the presence of a protoplanetary disk. Holman & Wiegert (1999) showed that any material in circumbinary orbit migrating inward will become unstable on short timescales once it passes a stability boundary ac,out, for which they provide an empirical fit to results from N-body simulations (their equation 3). This critical distance is a function of the binary mass ratio and eccentricity and ranges from around 2 to 4 times the binary separation…

Thus we have inward planetesimal migration followed by ejection from the binary system when the object passes the stability boundary. The authors’ models show that more than 75 percent of interstellar bodies originate from binary stars, a number that is even higher for rocky objects.

Even if a typical circumbinary only ejects as much material as the Solar system we would still expect close binaries to be the source of more than three quarters of interstellar bodies due to the relatively low abundance of single star systems with giant planets like the Solar system. Whereas in the Solar system the ejected material is overwhelmingly icy, we expect that around 36% of binaries may predominantly eject material that is rocky or substantially devolatilised, leading to similar expectations for the abundance of rocky/devolatilised bodies in the interstellar population.

“The same way we use comets to better understand planet formation in our own Solar System,” says Jackson, “maybe this curious object can tell us more about how planets form in other systems.” Of course it will take more than one such object to do the job, but we’re learning that future detections of interstellar objects are likely as estimates of their occurrence rise.

The paper is Jackson et al., “Ejection of rocky and icy material from binary star systems: Implications for the origin and composition of 1I/‘Oumuamua,” Monthly Notices of the Royal Astronomical Society 19 March 2018 (abstract). The Laughlin/Batygin paper is “On the Consequences of the Detection of an Interstellar Asteroid,” submitted to Research Notes of the AAS (abstract).