Looking at John Brophy’s Phase II NIAC award reminds us how useful the two-step process can be at clarifying and re-configuring deep space concepts. Brophy (Jet Propulsion Laboratory) had gone to work in Phase I with a study called “A Breakthrough Propulsion Architecture for Interstellar Precursor Missions.” The work studied a lithium-fueled ion thruster with a specific impulse of 58,000 seconds. If that didn’t get your attention, consider that the Dawn spacecraft’s ISP is 3,000 seconds, and think about what we might be able to do with that higher figure.

I think about ideas like this in terms of infrastructure. The relation to interstellar flight is this: While we may well get robotic nano-probes off on interstellar missions (think Breakthrough Starshot) some time this century, the idea of human expansion into the cosmos awaits the growth of our civilization into the rest of the Solar System. Along the way, we will learn the huge lessons of closed-loop life support, means of planetary protection and propulsion technologies to shorten trip times. Building that infrastructure is an early phase of the interstellar project. 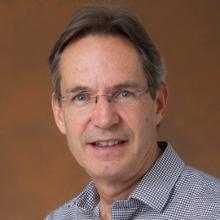 What Brophy has been working on with his Phase I study is the question of how to provide power to craft at the outer edge of our planetary system. When I looked at the 2017 NIAC awards, a stumbling block for Brophy seemed to be the need for a 10-kilometer laser array.

Brophy’s idea was to beam power to a lightweight photovoltaic array aboard the actual spacecraft — this is how he generates the power needed to drive those ion thrusters. Closer to home we would use solar power to do the trick today, while looking at nuclear power when far from the Sun. Brophy is talking about ion thruster operation in deep space without the need for a heavy onboard power source. This gets around the problem of increasingly inefficient solar panels as we go further from the Sun, as well as their alternative, a bulky nuclear reactor.

Image: John Brophy (JPL) initiated the NSTAR Project that provided the ion propulsion system for Deep Space 1, delivered the ion propulsion system for the Dawn mission, and co-led the study at Caltech’s Keck Institute that resulted in the Asteroid Redirect Mission. His Phase II NIAC award will be used to investigate beamed power delivery to a powerful ion engine. Credit: JPL.

If we can power up the lithium-ion engine, mission velocities of 100 to 200 km/s would be possible. This is exciting stuff: The Phase I study talked about a 12-year flight-time to 500 AU, which gets us into gravitational lensing territory, while flight time to distant Pluto/Charon could be reduced to 3.6 years. For that matter, imagine a Jupiter mission in roughly a year.

A 10-kilometer array is daunting indeed, but now we’re going into Phase II, which significantly refines the concept based on the results of the Phase I study. Phase I assumed a 100 MW output power at a laser frequency of 1064 nm, feeding a 70 MW electric propulsion spacecraft with a 175-meter photovoltaic array coupled to its lithium-fueled ion thrusters.

What the Phase I study revealed was a better set of parameters: Brophy will begin the Phase II study with a laser array of 2-kilometer diameter aperture with an output power of 400 MW at a laser frequency of 300 nm. Aboard the vehicle, a 110-meter diameter photovoltaic array is now considered. It will power a 10 MW electric propulsion system.

Results of the Phase I work brought the specific impulse down to 40,000 seconds, which is the figure of merit for Phase II, all in the service of a specific mission outcome: A journey to the solar gravity focus at 550 AU. The changes in configuration came from feasibility analysis — could we develop the required photovoltaic arrays with the required areal density (200 g/m2)? Could we achieve photovoltaic cells tuned to the laser frequency with efficiencies greater than 50%? And what about pointing the laser array with the needed accuracy, not to mention stability to supply the reference mission at the gravity focus?

In terms of beamed propulsion, Brophy’s laser array should remind us of Breakthrough Starshot’s own plans for such an array, though Starshot does not plan on building the array in space. Starshot’s array is to be on the ground, avoiding the huge issue of constructing and controlling a gigantic laser outside our planet, while creating a host of other questions, such as atmospheric attenuation of the laser signal. In both instances, however, we deal with a power source separate from the spacecraft, producing real benefits in terms of weight and efficiency, and creating a reusable driver for missions throughout the system. 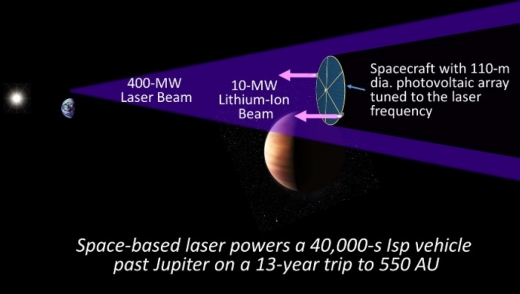 And what about the power developed in the onboard photovoltaic array? The output in the Phase I study was expected to be 12 kV, which goes a long way beyond the best solar arrays available today. Those on the International Space Station, for example, produce 160 volts. One part of Phase II, then, will be to show that the photovoltaic system can be operated at more than 6 kV in the plasma environment produced by the lithium-ion propulsion system.

Have a look at the precis to see what Brophy considers to be the outstanding technical issues, which include modeling the lithium plasma plume created by the engine and demonstrating a small aperture phased array that can become scalable to larger apertures. Depending on the outcome of these investigations, a roadmap should emerge showing how we might develop demonstrator missions along the way to finalizing a workable system architecture.

Let’s put all this into perspective. The challenge of operating beyond 5 AU is the rapid dropoff in solar power available to a spacecraft, despite recent advances in photovoltaic array technology. A laser system like Brophy’s could increase the power density of photons available to a spacecraft bound for the outer Solar System by several orders of magnitude, giving us an ion propulsion system of considerable power. Moreover, this would be a spacecraft that does not need to create its own power but receives it, doing away with power processing hardware.

I come back to infrastructure when evaluating concepts like this. A workable laser array of this magnitude becomes a way to solve power issues far from the Sun that could drive missions throughout the system. Like the combined laser / neutral particle beam concept we’ve looked at over the last two days, it assumes a hybrid meshing of technologies that could go a long way toward enabling robotic and manned missions deep into the Solar System. That makes laser beaming to an ion engine an alternative well worth the continued scrutiny of NIAC Phase II.