With TESS going into a 60-day period of calibration and testing, I’ll turn this morning to a different kind of survey. GALAH is an acronym for Galactic Archaeology, a term I’ve generally associated with so-called Dysonian SETI, where data is mined in a search for signs of advanced engineering or any anomalies that could signify an extraterrestrial civilization at work. But GALAH has a different object: It has examined some 340,000 stars enroute to 1 million.

A just published paper on GALAH states the goal succinctly:

The overarching goal of the GALAH survey is to acquire high-resolution spectra of a million stars for chemical tagging, in order to investigate the assembly history of the Galaxy.

The survey was launched in 2013 as a deep study of galactic formation and evolution, using the HERMES spectrograph at the Australian Astronomical Observatory’s 3.9-meter Anglo-Australian Telescope near Coonabarabran, NSW. Now coming online is a major data release, the second from GALAH, that has interesting implications not only for the broad field of galactic evolution but also the history of our own Sun. Thus Gayandhi De Silva (University of Sydney and AAO), who oversaw the work on Hermes and coordinated the effort leading to the release:

“No other survey has been able to measure as many elements for as many stars as GALAH. This data will enable such discoveries as the original star clusters of the Galaxy, including the Sun’s birth cluster and solar siblings — there is no other dataset like this ever collected anywhere else in the world.” 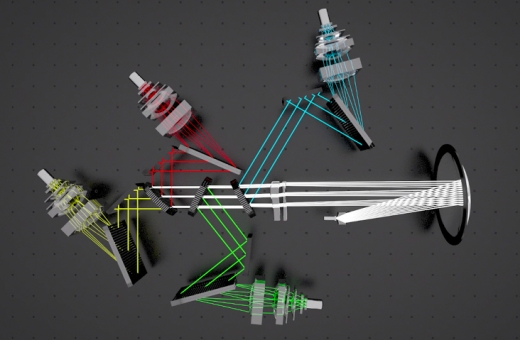 Image: A schematic of the HERMES instrument showing the path of star light from the telescope and demonstrating how it is split into four different channels. Credit: AAO.

Our recent look at the possibility of a prior civilization on our own planet is now superseded by a quest to dig much further back in time. Finding the Sun’s birth cluster leverages the fact that stars from the same originating cluster should have the same chemical composition. The problem is that clusters within the Milky Way are quickly pulled apart and are scattered. GALAH is looking to match compositional traits — the researchers call this the stars’ DNA — to parse for each star about two dozen chemical elements like oxygen, aluminium and iron.

So the day may come when we can point to stars that were born in the same cluster as the Sun. While an hour is needed to collect enough photons of light from each of the stars in the GALAH survey, the project is able to observe 360 stars at the same time, an effort that so far has involved more than 280 nights at the AAO instrument since 2014 for data collection. The HERMES spectrograph was designed by the AAO specifically for the GALAH survey.

At work here is computer code that PhD student Sven Buder, lead author of a paper on the data release, calls ‘The Cannon,’ a nod to astronomer Annie Jump Cannon, whose work on stellar spectra of several hundred thousand stars in the early 20th Century was groundbreaking. Says Buder:

“We train The Cannon to recognize patterns in the spectra of a subset of stars that we have analysed very carefully, and then use The Cannon’s machine learning algorithms to determine the amount of each element for all of the 340,000 stars.“ 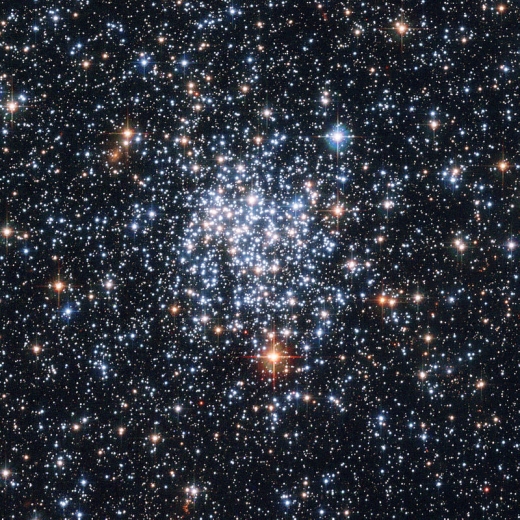 Image: Hubble has captured the most detailed image to date of the open star cluster NGC 265 in the Small Magellanic Cloud. The image taken with the Advanced Camera for Surveys onboard the NASA/ESA Hubble Space Telescope show a myriad of stars in crystal clear detail. The brilliant open star cluster, NGC 265, is located about 200,000 light-years away and is roughly 65 light-years across. Our investigations into open clusters like this may help us learn more about our Sun’s birth. Credit: ESA / NASA / E. Olszewski (University of Arizona).

Be aware that on the 25th of this month, the European Gaia satellite will likewise offer a major data release. Gaia, with its mapping of more than 1.6 billion stars in our galaxy, will mesh with the GALAH findings, using the latter’s calculations of stellar velocities to interpret Gaia data in what is becoming the most accurate atlas of the night sky ever available. From the paper:

The stellar parameter and abundance information contained in GALAH DR2 [Data Release 2] will enable major steps forward in Galactic Archaeology, including detailed work to identify clusters within the chemical space and characterize its structure and dimensionality. In combination with the dynamical information provided by Gaia DR2, we will work toward a reliable narrative of how the Milky Way was assembled and how it has evolved since, using chemodynamics and chemical tagging.

Incorporating parallax information from GAIA and broadening GALAH toward the target of one million stars is the task that lies ahead for the researchers, who plan subsequent data releases with re-analyses of all the stars from DR2 and the new stars subsequently observed.