Back in the late 1970s I didn’t know anything about star catalogs. I suppose that, if asked, I would have assumed they were out there — how otherwise could astronomers do their jobs? But the first catalog of stars that came into my life emerged when I was writing an article about SETI, a field I developed an intense interest in and at that time knew very little about. For the article I needed to identify the closest stars, and thus I stumbled upon the Gliese Catalog of Nearby Stars, and over the course of time became absorbed by the idea of exoplanets.

In many ways my first dip into the Gliese catalog began the journey that continues here, because that first SETI article was the forerunner of the kind of writing I have been doing since the turn of the century. In that time our catalogs have grown more and more interesting to me, but none can match today’s, the all-sky view of almost 1.7 billion stars that is the result of the European Space Agency’s Gaia mission. The second Gaia data release became available on April 25 and includes parallax, proper motion and color data for more than 1.3 billion of these stars. 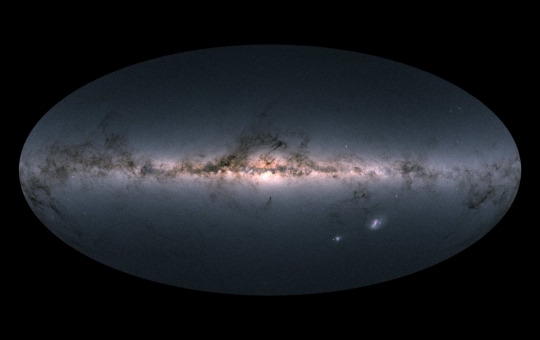 Image: Gaia’s all-sky view of our Milky Way Galaxy and neighbouring galaxies, based on measurements of nearly 1.7 billion stars. The map shows the total brightness and colour of stars observed by the ESA satellite in each portion of the sky between July 2014 and May 2016. Brighter regions indicate denser concentrations of especially bright stars, while darker regions correspond to patches of the sky where fewer bright stars are observed. The colour representation is obtained by combining the total amount of light with the amount of blue and red light recorded by Gaia in each patch of the sky. The bright horizontal structure that dominates the image is the Galactic plane, the flattened disc that hosts most of the stars in our home Galaxy. In the middle of the image, the Galactic centre appears vivid and teeming with stars. Credit: ESA.

You might note the two bright objects at lower right. These are the Large and Small Magellanic clouds, two of the dwarf galaxies that orbit the Milky Way. Note as well the darker regions along the galactic plane, clouds of interstellar dust that hide the light of stars behind and within them, some serving as the breeding ground for young stars.

This is the richest star catalog yet produced, based on 22 months of observation. Gaia, says ESA director of science Günther Hasinger, is “redefining the foundations of astronomy.” And he adds:

“Gaia is an ambitious mission that relies on a huge human collaboration to make sense of a large volume of highly complex data. It demonstrates the need for long-term projects to guarantee progress in space science and technology and to implement even more daring scientific missions of the coming decades.” 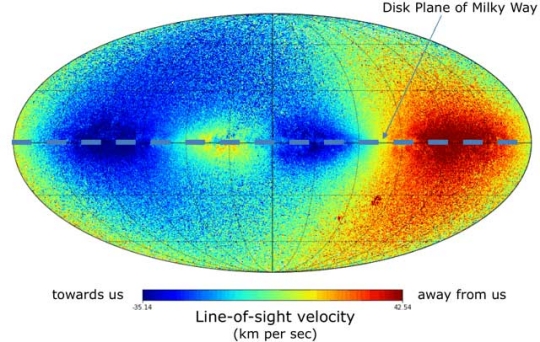 Image: The all-sky map of median velocities of stars towards or away from the Sun. The large scale pattern caused by rotation of our Galaxy is evident. Credit: DPAC/ESA.

We’ve had quite a jump here, moving from the first data release, published in 2016, and containing the distances and motions of 2 million stars, to today’s 1.7 billion. ESA is saying that the new release identifies the positions of some of the brightest stars in the field to the same level of precision as Earth observers would need to spot a coin on the surface of the Moon. We achieve estimated distances to individual stars for about ten percent of the total catalog.

This second data release allows progress in all these studies by providing not only distances and apparent motions across the sky for 1.3 billion sources, but also very precise measurements of brightness and colour for an even larger catalogue of 1.7 billion sources. Seven million stars have their line of sight velocities measured, providing full 6-dimensional – three space positions, 3 space motions – information, determining full orbits for those stars in the Milky Way. This is the information needed to weigh the Galaxy, and determine the distribution – and perhaps the properties – of Dark Matter, the mysterious substance which dominates the mass of the Galaxy and the Universe. Credit: Science & Technology Facilities Council’s (STFC) Rutherford Appleton Laboratory, UK.

Out of Gaia comes a refined version of the Hertzsprung-Russell diagram, an essential tool relating stellar intrinsic brightness to color that helps us make sense of the evolution of stars. Gaia offers data on four million stars within 5,000 light years of the Sun, revealing fine-grained details in the traditional H-R plot, including differing signatures for white dwarfs with hydrogen-rich and helium-rich cores, and the ability to distinguish between disk and halo stars. The orbits of 75 globular clusters and 12 dwarf galaxies around the Milky Way can likewise be derived.

“The new Gaia data are so powerful that exciting results are just jumping at us,” says Antonella Vallenari from the Istituto Nazionale di Astrofisica (INAF) and the Astronomical Observatory of Padua, Italy, deputy chair of the data processing consortium executive board. [W]e have built the most detailed Hertzsprung-Russell diagram of stars ever made on the full sky and we can already spot some interesting trends. It feels like we are inaugurating a new era of Galactic archaeology.” 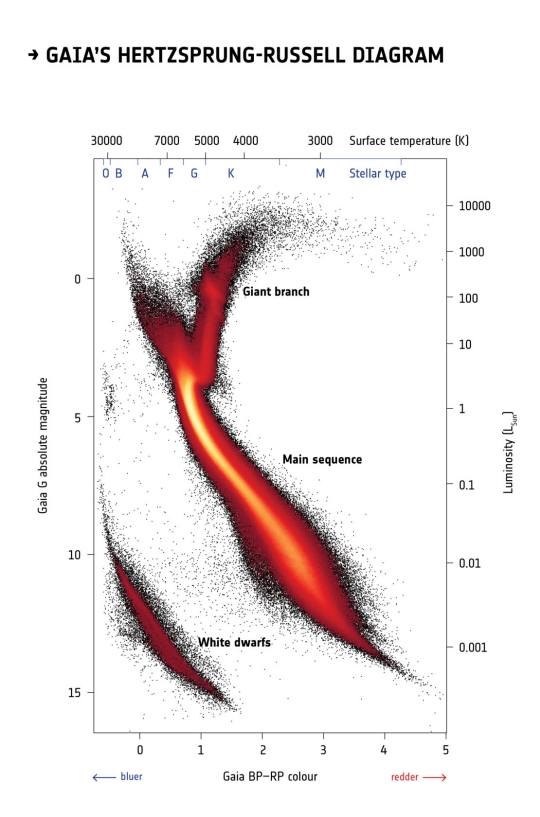 Image: Named after the two astronomers who devised it in the early twentieth century, the Hertzsprung-Russell diagram compares the intrinsic brightness of stars with their colour and is a fundamental tool to study populations of stars and their evolution. Credit: ESA.

Papers on the second Gaia data release appear in a special issue of Astronomy & Astrophysics, while numerous video and virtual reality resources are available here. As we look forward to abundant discoveries from the current release, it’s worth remembering that the final Gaia catalog will not be published until the 2020s. The five-year Gaia mission has been approved for extension until the end of 2020. Gaia’s 3-dimensional map of our galaxy shows 600 times more stars than previously available and covers a volume 1,000 times larger than the first Gaia data release, with a precision 100 times larger. It is hard to imagine any area of astrophysical research that will not be advanced by the availability of these data.

And I have to add this coda: Star catalogs, after all these years, still astound me. I think that’s because the sheer scale of things is so astonishing. After all, the massive Gaia haul at this point reaches 1.7 billion stars, out of a galaxy made up of perhaps 200 billion, in a universe of galaxies whose true extent we are still trying to fathom. Our cataloging species has only begun its immense task.

Previous post: More News from the ‘Planet of Doubt’