How would an advanced society communicate its history and values to the stars? Bill St. Arnaud argues that just as we can uncover our own history through careful analysis of archaeological sites, so SETI might uncover traces of ETI cultures in the form of signals that take advantage of natural astrophysical processes. Read on for more on an idea Bill first broached in a Centauri Dreams post called Virtual Von Neumann Probes. A consultant and research engineer, Bill’s work has involved everything from charging methods for electric vehicles to next generation Internet networks. But his interest in SETI continues to mesh with his expertise in networking in this examination of a novel way to speak from the deep past. 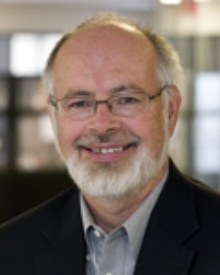 To date most SETI research has focused on the assumption that an advanced extra- terrestrial society will want to “communicate” with similar beings throughout the universe. But it is my belief that given the vast distances and time that communication via a “communications channel” even if it is one way, such as optical or radio frequency transmissions will be impractical.

Current SETI searches assume that an advanced civilization will use extremely powerful omni-directional transmitters or highly directional and focused signals targeted at our solar system. The challenge with either approach is the fact that successful one-way communication between intelligent species is the dependency on the “L” term in the Drake equation. L represents the length of time for which such civilizations release detectable signals into space. If L is relatively short then possibility of two separate intelligent civilizations being coincident in time to send and receive a signal is very small. So even though there may have been many intelligent civilizations we will probably never be aware of their existence.

Given these constraints I suggest instead that we look for extra-terrestrial intelligence in a similar way we searched for signs of intelligence on earth prior to the modern age. We cannot hope to communicate to prehistoric man, but we know that intelligent beings existed on earth thousands of years ago through archaeological evidence such as cave paintings, pyramids, monuments, etc.

So rather than deploying physical time capsules can we think of a way of deploying electromagnetic time capsules made from self amplifying or self re-generating optical and RF signals that propagate forever and are easily discoverable and locatable? SETI researchers, in the past, have often speculated on self replicating robots that could travel to distant planets and recreate themselves by using local materials, but the complexity of such a device boggles the mind. Self amplifying and regenerating electromagnetic signals on the other hand would conceivably be much easier to deploy and possibly be achievable with current technology. 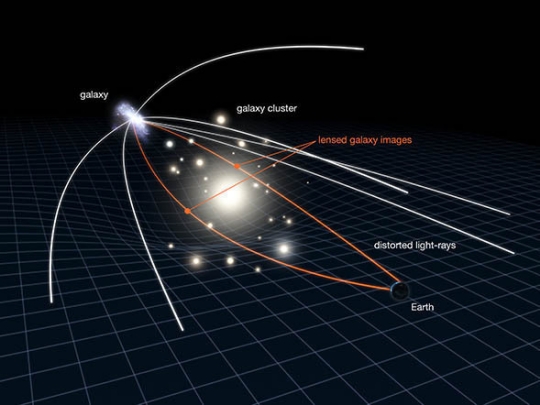 Image: An example of one kind of naturally occuring gravitational lensing, in this case involving galactic clusters. Lensing clusters are clusters of elliptical galaxies whose gravity is so strong that they bend the light from the galaxies behind them. This produces distorted, and often multiple images of the background galaxy. But despite this distortion, gravitational lenses allow for greatly improved observations as the gravity bends the lights path towards Hubble, amplifying the light and making otherwise invisible objects observable. Credit: JPL.

Given that they depend on natural physical processes for amplification and regeneration the originating transmission does not to be that powerful or directional. It is conceivable that low power transmissions are that all is required to launch a self amplifying and regenerating electromagnetic signal. The signals may also be in a part of the spectrum that is not usually commonly assumed for interstellar transmission but rather exist in parts of the spectrum associated with the physical amplification and regeneration process.

There are a host of problems with current interstellar electromagnetic signaling such as attenuation, dispersion, group delay, etc etc. Given these limitations how could we hope to deploy a self replicating optical signal that will maintain its integrity over the vast distances and time of space?

One intriguing possible solution is using gravitational lenses to refocus and amplify a interstellar electromagnetic signal. In an interesting post called The Gravitational Lens and Communications, Paul Gilster quotes the work of Italian physicist Claudio Maccone, who explains that a ‘Sun-Alpha Centauri direct radio bridge exploiting both the two gravitational lenses, this minimum transmitted power is incredibly… small! Actually it just equals less than 10-4 watts, i.e. one tenth of a milliwatt is enough to have perfect communication between the Sun and Alpha Cen through two 12-meter FOCAL spacecraft antennas.`

One should also note that a gravitational lens acts like a lens with a gradient refractive index which also collimate and reduce electromagnetic dispersion.

Other possible mechanisms for self replicating signals include RF Orbital Angular Momentum (OAM), quantum entanglement and using stellar corona as pump amplifiers. As an example see the recent post about solar corona masering. I am sure there are other possible candidates. I challenge the reader of this missive to think of other ways of creating self replicating electromagnetic time capsules.

If we can come up with a plausible mechanism for deploying self replicating optical/rf time capsules the next obvious step would be to see if we can detect any such phenomena in our local interstellar region.

Instead of searching for communications signal from an extraterrestrial intelligent civilization we should perhaps instead look for “archaeological” evidence of their existence with the most likely candidate being a easily discoverable self replicating electromagnetic time capsule.

If you have any suggestions or comments, or think I am completely nuts please feel free to contact me at Bill.st.arnaud@gmail.com

Previous post: The Habitable Zone: The Impact of Methane