Is Asteroid 2015 BZ509 from another Stellar System?

It’s conceivable that getting humans to an interstellar object may not involve journeying all the way to another star. We’ve learned that wandering asteroids and comets move between stars, as the case of ‘Oumuamua demonstrated, and early research offers the possibility that such objects exist in large numbers. Now we have (514107) 2015 BZ509, which is conceivably an interloper into our system of another sort. Two researchers believe that this asteroid near the orbit of Jupiter is not just passing through, but a captured object from another stellar system.

A comparison with Triton seems apt. One of the most compelling pieces of evidence that Neptune’s largest moon is actually a Kuiper Belt Object is its retrograde orbit. We see the same thing with 2015 BZ509, and for Fathi Namouni (Observatoire de la Côte d’Azur) and Helena Morais (Universidade Estadual Paulista), that sends a clear message. The researchers have offered their work in a new paper in Monthly Notices of the Royal Astronomical Society.

“How the asteroid came to move in this way while sharing Jupiter’s orbit has until now been a mystery,” explains lead author Namouni. “If 2015 BZ509 were a native of our system, it should have had the same original direction as all of the other planets and asteroids, inherited from the cloud of gas and dust that formed them.”

Namouni and Morais used computer simulations to track the errant asteroid back in time, arguing that 2015 BZ509 has moved this way since the birth of the Solar System some 4.5 billion years ago, an indication that it could not have formed there originally. The case also relies on the fact that the Sun formed in a tightly packed star cluster where movement of objects ejected by gravitational forces within their own system into orbits around other stars would not have been uncommon. Thus this rogue asteroid may well contain information about planet formation and evolution as well as telling us more about the Sun’s original siblings.

So what exactly do we know about this object? 2015 BZ509 is in a resonant, co-orbital motion with Jupiter and represents the first discovery of a retrograde co-orbital asteroid with Jupiter or any other planet. Its orbital eccentricity of 0.3805 takes it inside and then outside of Jupiter’s orbit at its closest approaches (176 million kilometers). The orbital period is 11.65 years and the inclination is 163 degrees, an evidently stable orbit if a complicated one. 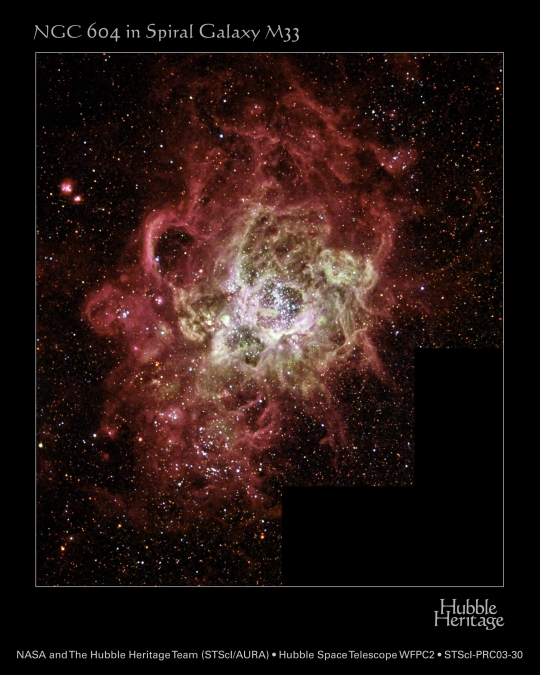 Image: Stellar nursery NGC 604 (NASA/HST), where star systems are closely packed and asteroid exchange is thought to be possible. Asteroid (514107) 2015 BZ 509 may have emigrated from its parent star and settled around the Sun in a similar environment. Credit: NASA / Hubble Heritage Team (AURA/STScI).

I’ve long speculated in these pages about interstellar missions that operate not by making fast jumps to other stellar systems but by moving incrementally over thousands of years, taking advantage of the fact that the Oort Cloud extends tens of thousands of AU, if not more, from the Sun. If similar debris were found around nearby stars, a patient species evolving new technologies and biologies as it progressed could simply ‘walk across’ to the next system.

Now we’re learning that we may be able to study interstellar materials without going nearly as far. We’re nowhere near ready to send humans into Jupiter space, but if this work is confirmed, then targets like (514107) 2015 BZ 509 will inevitably receive future visitors. We have so much to learn about how common objects like these are, but the researchers believe the number could be high.

In the passage from the paper below, the term ‘polar corridor’ refers to objects pushed into polar inclinations all the way out to the Oort Cloud. The ‘clones’ refer to the computer simulations Namuni and Marais conducted, simulating the evolution of one million clones of 2015 BZ 509:

The one million clone simulation provides further evidence that there are currently more extrasolar asteroids in the Solar system. In effect, if more objects were captured along [with] 2015 BZ509 by Jupiter early in the Solar system’s history, the less stable orbits must have left the co-orbital region by way of chaotic diffusion into the polar corridor. This occurs because the N-body problem is time-reversible and unstable clones of 2015 BZ509 that are followed into the future exit the co-orbital region and end up in the polar corridor. The prominent presence of the polar corridor in the simulation over the age of the Solar System mainly in the trans-Neptunian region implies that it is currently populated by extrasolar asteroids.

Make no mistake, most of the digital clones the researchers put into motion fell victim to gravitational forces that would have prevented the kind of orbital resonance we see with this object. But a few did remain in stable configurations all the way back to the earliest days of the Solar System. How strong a case this makes for an interstellar origin is still in doubt. Scott Tramaine (Institute for Advanced Study), for example, questions whether gravitational nudges coupled with a collision could account for 2015 BZ509, with no interstellar involvement at all.

For more on Tremaine’s doubts and a look at the possible involvement of the still undiscovered Planet Nine, see Lee Billings’ essay in Scientific American. Billings also speculates about robotic mission possibilities. It’s clear that 2015 BZ509 is going to remain newsworthy — and controversial — as we try to build our census of interstellar objects near the Sun.

Next post: TESS: The View into the Galactic Plane